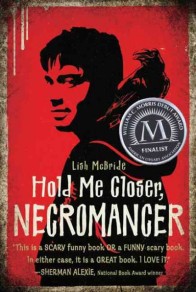 GoodReads Summary:  Sam leads a pretty normal life. He may not have the most exciting job in the world, but he’s doing all right—until a fast food prank brings him to the attention of Douglas, a creepy guy with an intense violent streak.

Turns out Douglas is a necromancer who raises the dead for cash and sees potential in Sam. Then Sam discovers he’s a necromancer too, but with strangely latent powers. And his worst nightmare wants to join forces . . . or else.

With only a week to figure things out, Sam needs all the help he can get. Luckily he lives in Seattle, which has nearly as many paranormal types as it does coffee places. But even with newfound friends, will Sam be able to save his skin?

What I Think: I had such a blast reading Hold Me Closer, Necromancer! I listened it on audio last year and fell in love with it. Sam is in some serious trouble when he finds out he’s a necromancer but he has great friends and a great sense of humor that make this book so funny while still being intense. Sherman Alexie’s quote on the cover says, “This is a SCARY funny book OR a FUNNY scary book, in either case, it is a GREAT book. I LOVE IT.” I agree completely!

Lish McBride develops characters who are sarcastic and witty but at the same time charming and good friends to each other. It’s like this book is just full of oxymorons. I think that’s why I enjoyed it so much. Sam and his friends are so likable and so real and then they are shoved into this paranormal plotline. It’s unique, creative writing at it’s best. It’s hard to describe what happens in the book without giving too much of it away, you just have to read it.

And don’t you just love the title? Every time I read the title, I hear Elton John singing in my head. The chapter titles are all song names, too, and I found myself singing along with every chapter. Funny, right?

As soon as I finished the book, I found Lish McBride (@TeamDamnation) on Twitter to ask her about a sequel. I was desperate to read more about the characters. Luckily there is a short novella out and the second book will be out later this year (I think September 2012).

Read With:  Wings by Aprilynne Pike, Shiver by Maggie Stiefvater, Eyes Like Stars by Lisa Mantchev

Snatch of Text:  “I stood in front of today’s schedule still holding my skateboard, still drenched from the ride over, and still desperately wishing that I hadn’t dropped out of college.” p. 1

“I opened the box, then quickly dropped it and scrambled up onto the counter, making very dignified shrieking noises. Ramon stared. Frank came into the kitchen just in time to see the box bounce onto its side and its contents roll lazily out. Ramon tried to back up, but he was already against the wall. Frank managed a quick hop back as Brooke’s head rolled to a stop in the middle of the floor. It had been severed cleanly at the neck, making her ponytail appear longer as it trailed behind like the tail on a grotesque comet. I couldn’t see any blood. In fact, the wound looked cauterized, which didn’t make it any more pleasant.

Nobody said a word.

“My mother is not a big fan of the straight path. She says you don’t learn anything by toeing the line. ‘Do you think,’ she says, ‘Little Red Riding Hood would have learned a damn thing if she hadn’t wandered off to pick some flowers?’” Very popular at PTA meetings, my mother. Good thing they gave her the willies.” p. 128

“I felt like I’d been scooped clean and had my insides replaced with brambles. Every time I twisted around to think, a new thorn would bite into me. So many fresh pains, and I hadn’t even sorted out my old ones yet.” p. 151

Writing Prompts: Write about a time in your life when you made a mistake and it impacted a friend. How did it change your relationship?

Jen is a National Board Certified Teacher in early/middle childhood literacy and teaches students who are deaf and hard of hearing in a suburb of Chicago.