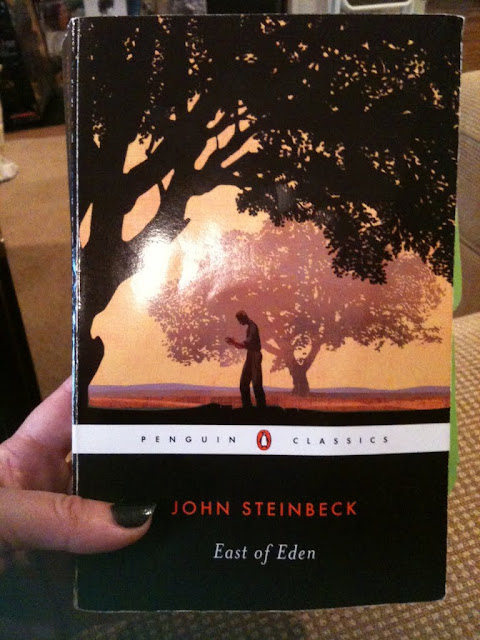 While researching the YA novel I just sent off to my lovely agent, I came across a quote from Steinbeck’s East of Eden that echoed one of the themes of my work in progress:

“You have” said Kate.

I’d read The Pearl as a schoolgirl in England and Of Mice and Men and The Grapes of Wrath in high school. I liked them, but Steinbeck didn’t rock my teenage world the way George Orwell did, so I was never inspired to read his other works.

Nonetheless, when my boyfriend Hank and I were living out my fantasy of driving up the Pacific Coast Highway in a convertible, I made him detour to the National Steinbeck Center out of respect for an author I admired, even if I didn’t count him amongst my influences.

That was four years before I discovered the quote above, which inspired me to read East of Eden. As a result, in my late 40’s, I’ve developed a wild, passionate love affair with John Steinbeck and am now on a quest to read every word he ever wrote. (Next up in the reading queue: In Dubious Battle and Travels with Charley in search of America.)  I’ll admit, I get pretty nerdy – perhaps even a trifle obsessive – about the writers I love.

Steinbeck considered East of Eden his magnum opus – the novel for which he’d been “practicing . . . for 35 years.”  I can understand why.  I read the book in awe that a writer could tackle so many powerful themes with such skill in a single tome. My copy is heavily underlined and festooned with Post-It notes. 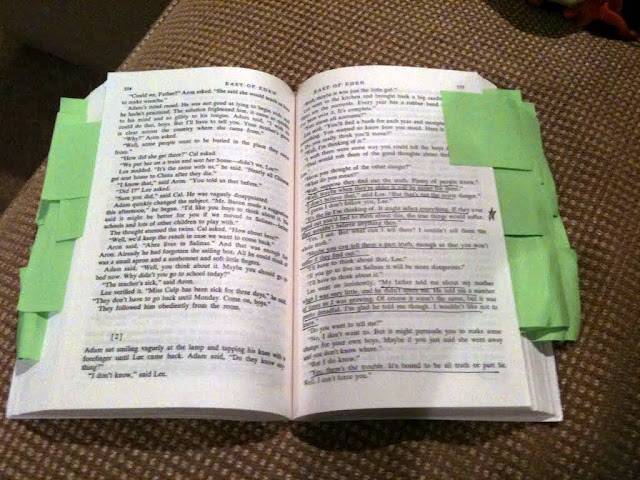 I finished the 602 page novel and wanted to start reading it again straight away so I could try to figure out how the heck he did it.

“I don’t see how it can be popular,” Steinbeck wrote in in 1949, “because I am inventing method and form and tone and content.” The critics might not have been entirely convinced (the Time reviewer complained the novel was “too blundering and ill-defined to make its story point) but East of Eden did, as Steinbeck hoped, “find a public ready for the open and honest.” Published in September 1952, it was a number one bestseller by November, and hasn’t been out of print since.

I wonder if I’d read East of Eden in high school if it would have had the same effect. Maybe it’s a case of something what we always hope to do for our kids – putting the right book in my hands at the right time. But one way or another, John Steinbeck now joins George Orwell, Judy Blume, William Golding and Laurie Halse Anderson as writers who have had a profound influence on me. And East of Eden will always have a very special place in my heart.

Sarah Darer Littman’s first novel, Confessions of a Closet Catholic, won the 2006 Sydney Taylor Book Award for Older Readers. Her novel Life, After was a 2011 Sydney Taylor Honor Book. She is also the author of Purge and Want to go Private?, a 2012 YALSA Quick Pick for Reluctant Readers. In addition to writing for teens, Sarah is an award-winning columnist for Hearst Newspapers (CT) and http://CTNewsJunkie.com.
Sarah lives in CT with her family. Visit her online at http://sarahdarerlittman.com, http://wanttogoprivate.com and on twitter @sarahdarerlitt.