As a picture book enthusiast I was disappointed with many of the board books I encountered during the first few months of my daughter’s life.  Most board books lacked the substance I was accustomed to from picture books.  However, I was determined to find quality board books so reading time with my daughter, Isabelle, would be pleasurable.  My quest was to find “meatier” board books for babies.  When I say “meatier,” I mean books I wouldn’t finish in a minute.  I wanted some satisfaction that I read my daughter a story or taught her something when I reached the back cover.  I asked just about everyone I knew who is a parent or has worked with young children for suggestions.   Once I got a slew of recommendations I researched the titles at the library and bought the ones I liked.

Regardless of how much I liked a board book, the true test came when I read the book aloud to Isabelle, the toughest critic, who is 17 months old.  Therefore, the books I’ve selected as the top ten board books are ones that are appreciated by mommy and daughter alike. 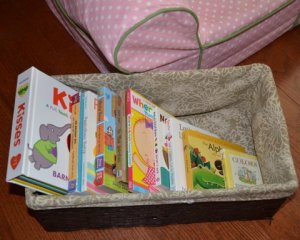 WHY I LOVE IT:  Bizzy Bear uses rhyme and repetition on every page.  Davies’s word choices are clear and are well-supported by adorable, detailed illustrations.
WHY MY DAUGHTER LOVES IT:  Isabelle likes the interactive nature of this book.  She enjoys using her fingers to manipulate the book so she can help Bizzy Bear move a pile of sand or a pallet of bricks.

WHY I LOVE IT: While each of the books in this set are only a few pages long, each tells a complete, detailed story.  In addition, the books’ small size makes them ideal for car rides, dinners out, or as a distraction when trying to put on Isabelle’s shoes.

WHY MY DAUGHTER LOVES IT: These books are the perfect size for my baby’s hands, which means Isabelle can flip through on her own and on-the-go.

WHY I LOVE IT: Now that our CSA is in full-swing, I love this book because it promotes farm fresh eating.  It teaches my daughter where her fruit and vegetables come from (e.g., ground, stalks,  vines) and reinforces the importance of growing one’s own garden.  In addition  this book is printed using almost all post-consumer recycled materials!

WHY MY DAUGHTER LOVES IT:  My daughter loves the illustrations, which include pictures of children picking fruit from their gardens.  She has flipped through this book so many times that it’s being held together with clear packing tape!

WHY I LOVE IT: The book shows all of the ways we can express our love for someone through kissing.  The illustrations are cute and the book is interactive on every page!

WHY MY DAUGHTER LOVES IT:  Isabelle enjoys this book because she can run her fingers over the elephants’ fabric trunks, pull arrows to reveal a monkey kissing another monkey’s toes, and lift flaps to reveal frogs kissing during story time.  Plus, there’s a hidden squeaker she likes to search for on the final page.

WHY I LOVE IT:  This book is fun to read thanks to the rhythm of words used on each page.  This text injects humor, which is done by having Little Pookie say funny things, written in a smaller, red font.  Finally,

WHY MY DAUGHTER LOVES IT:  Isabelle stays engaged with the text thanks to Boynton’s expert use of rhythm and rhyme. Further, her rapt attention may be thanks to the book’s illustrations, which are highly supportive of the text.

WHY I LOVE IT: Noah’s Ark is an accessible way to share the story of the great flood with Isabelle in a format she can appreciate.  In 12 pages, Priddy tells the story of Noah matching up the prose with cartoon-like illustrations.

WHY MY DAUGHTER LOVES IT: Isabelle’s favorite animal, the giraffe, appears in the book on the ark.  She loves touching the pages with giraffes.   While I don’t know if giraffes made it on to Noah’s actual ark, Priddy tells this bible story in a way that she will eventually be able to understand and learn from.

WHY I LOVE IT:  Who questions are on the left side of each page spread (e.g., “Who’s hiding behind the blocks?”) with the word “peek-a-boo” printed on each flap.  Children move the flap to reveal a different baby.  Since the text in this book is limited, I ad-lib my own words to describe each baby and what s/he is doing once Isabelle lifts a given flap.  Speaking of flaps, they’re extremely durable!

WHY MY DAUGHTER LOVES IT: Isabelle loves to look at the babies in this book who are doing typical baby things like getting messy while eating cereal, splashing in a tubby with a rubber duckie, and sleeping with stuffed animals.

WHY I LOVE IT:  This book has clear illustrations that depict the wild animals for each letter of the alphabet.  Watt has drawn each animal in its habitat, which means I can invent other things to say about each animal (e.g., P is for Panda.  The panda sits in the tree eating bamboo.)

WHY MY DAUGHTER LOVES IT:  My daughter’s bedroom has a jungle theme so she sees animals often.  Watt’s illustrations are detailed, so each page holds Isabelle’s eye a little longer than other ABC board books.

WHY I LOVE IT: The Birthday Box appeals to any parent who has bought their child a toy only to have them be more interested in the packaging it comes in.  Since the baby character is meant to be androgynous, one can choose the baby’s gender when they read it aloud to their little one.

WHY MY DAUGHTER LOVES IT: Isabelle likes touching Oscar, the darling puppy.  Her face lights up when the baby and Oscar fly over the ocean, sail in a ship, and sled down a hill.

WHY I LOVE IT:  This book is my favorite lift-the-flap book by Katz since it poses where questions on every page.  The where questions always contain a rhyme (e.g., “Where is baby’s tushe that’s soft and smooshy?”).  Once lifted, each flap reveals the body part and shares an answer that supports the flap’s where question (e.g., Under your diaper!).

WHY MY DAUGHTER LOVES IT: Isabelle loves lifting the flaps in this book since they’re uniquely shaped and occur in different places on every page.

There are oodles of other board books that aren’t on this list, some of which are by authors whose books appear above.  I only included books published in the past ten years.  Some 20th century favorites in our house include Goodnight Moon by Margaret Wise Brown, The Very Hungry Caterpillar both by Eric Carle, and Little Blue and Little Yellow by Leo Lionni.

I’ve discovered many incredible board books since I began my quest.  It took some time to find quality board books, but the time I spent researching and reading has allowed me to build a library of board books our family will read for many years to come.

Stacey Shubitz is a literacy consultant and a former elementary school teacher.  She co-authored Day by Day: Refining Writing Workshop Through 180 Days of Reflective Practice (Stenhouse, 2010) with Ruth Ayres.  She has been blogging at Two Writing Teachers since 2007.  She recently started a new blog, Raising a Literate Human , which is about the most challenging and rewarding job she’s ever had: being a mother.  She can be found on Twitter at @raisealithuman.