A Cloak by Jenni Holm

One of the most influential authors in my life was the late Lloyd Alexander. His book, The Black Cauldron, was *the* book that changed how I thought about everything. It made me want to learn Welsh and sword-fighting and how to use a bow and arrow. But most of all it made me want to get a nice lined cloak. It seemed handy for sleeping on the cold forest floor when out adventuring.

Mr. Alexander (I can’t quite bring myself to call him “Lloyd” – he was too much of a hero to me) had a way of making his characters come alive. They  became my best friends.

There was Taran the pigkeeper, Eilonwy aka “Princess Eilonwy, daughter of Angharad, daughter of Regat of the Royal House of Llyr” (say that ten times fast), wise Dallben, Doli of the Fair Folk, the bard Fflewddur Fflam, stoic Gwydion, and, of course, faithful Gurgi, who was like an oversized teddy bear or something. It was never quite clear. But he was lovable all the same.

I even used my hard-earned babysitting money to buy D&D figurines that looked like the characters from the books.

The Black Cauldron spoke so perfectly to what if felt like to be a kid. How it sometimes seemed that everything exciting was happening just outside your reach.

“I am old enough to sit in a council of men,” Taran interrupted excitedly. “I have learned much; I have fought at your side, I have … “

“Gently, gently,” Gwydion said. “We have agreed you shall have a place. Though manhood,” he added softly, with a trace of sadness, “may not be all that you believe.”

See, I was this crazed girl growing up in Pennsylvania, and he lived in Pennsylvania, too (not really all that far from me as it turned out.) I sent him a fan letter and when he went to write me back he realized that I had not written down my return address (but had helpfully put down my phone number). So imagine my shock when he called me … to ask for my address. Naturally, my head exploded and the rest is history.

Years later, I sent him copies of my books along with a note telling him how much his phone call had meant to me. This is the letter he sent back. It now sits on my desk. 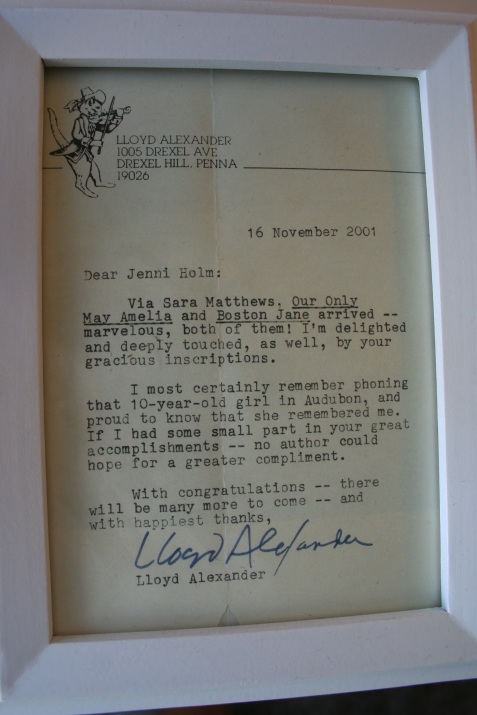 The moral of this story is if you send a fan letter to your favorite author and don’t include your return address, he/she may call you on the phone. Also, get a cloak. It’ll keep you warm when you’re fighting the zombie Cauldron-Born. Or just sitting in the cafeteria at school.

Jenni Holm is a 3-time Newbery Honor winning her author. She also won a Nerdy Book Club award for her work on the Squish graphic novel series.

Be sure to check out all of the photos from the Babymouse for President Nerdy Book Club contest by clicking on the image below.

For an extensive collection of Babymouse resources please visit the blog of Mr. John Schu.

Like Loading...
← “Books have forever stayed with me” by Michelle L. N. Gray A Graphic Book Review of The Scorpio Races by Maggie Stiefvater – Reviewed by Debbie Ridpath Ohi →