Did you get a load of that title?  Pretty specific, isn’t it?  Why did I make it so darn specific, you may ask?  Well, the reason is simply because there are so many fabulous graphic novels out there that the only way I could *possibly* narrow down my list to a workable top ten was by making it as specific as I possibly could. Yes, I still had to leave out some startlingly brilliant works (do mention any you personally adore in the comments!) but I was able to, at least, choose a small sampling of the vast array of wonderful graphic novels published today.

Now, I feel this bias is quite a symptom of age.  I very rarely come into contact with children who won’t pick up a book simply because it has pictures (au contraire!) but, in our adult world, graphic novels seem to have been relegated to the geek culture.  We have a picture of the average American adult “comic book reader” that is far from attractive.  Although I, personally, would certainly fall under the aforementioned category of “geek” I’m here to say, nay to shout from the hills, that there are graphic novels out there for ANYONE who enjoys a good story.  This list is certainly good for those middle grade readers for which these books were written, but these books are worth reading for you to!  The unique graphic format may take some getting used to, but, I promise, if you put in some effort with the titles in the following 10 series, you will be amply repaid with the work of many of the best authors and artists working today.

Now THIS is a harrowing and suspenseful tale.  Siblings Emily and Navin, after finding a mysterious Amulet that has astounding power, are sucked into an alternate world when their mom is stolen from them. There they meet friends and foes and must come to terms with the nature of power, independence, friendship, and family. There’s a constant sense of danger that permeates the whole series and makes it *such* an exciting read.  I have kids who are totally addicted to this series, and I certainly understand why.  You’re never quite sure what might happen and Kibuishi leaves you feeling delightfully unbalanced and dying to know what happens next.  And that artwork!  How imaginative!  Kibuishi creates a totally unique world and makes it beautiful, intriguing, and more than a little bit scary.  The whole series has an aura of epicness that is missing in so many fantasy novels, graphic or otherwise.

Now, don’t you go reading Owly unless you have a very high tolerance for cuteness.  Because, let me tell you, Owly and Wormy are two adorable creatures.  But don’t think just because this is a lower level, CUTE series that it has no depth.  Oh no no no no no!  Runton deals with some pretty hefty themes: friendship, loss, loneliness, coming-of-age, and that’s just in the first volume! Now, what strikes me most about this series is the EMOTION.  Runton makes you *feel* for these critters and their circumstances.  This series is ALL about the artwork and I love how Runton is able to communicate so much without words.  Now, this graphic novel series does take some patience, it’s not always clear what’s going on in the panels at first glance, but if you really, truly study them you will be rewarded with a utterly delightful story. 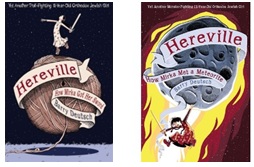 “Yet Another Troll-Fighting 11-Year-Old Orthodox Jewish Girl.”  How about that byline to grab your attention, huh?  Yes, Mirka is an orthodox Jewish girl and what she wants more than anything is to be able to fight monsters.  I love Mirka’s personality: her gumption, her aggravation, her cleverness, and, yes, her faith.  Although this book is an excellent fantasy (the indignant talking pig and sarcastic troll are AWESOME), I feel its strongest quality is how Deutsch depicts a culture that is unfamiliar to many of us. I love the illustrations and descriptions of

Shabbos especially.  Deutsch does such an excellent job of showing how important this holiday is to families like Mirka’s.  Also, this novel shows the true power of knitting.

(3 titles published so far.  4th title: Dorothy and the Wizard in Oz published later this month)

I don’t have to explain the plot of this one to you, do I?  Kansas, a tornado, Dorthy is swept away to a mystical land where she meets friends, witches, has adventures, and, most of all, just tries to get HOME.  Now, of all the graphic novels on this list, this is the series that, in my opinion, is the most accomplished.  It’s not easy taking an already established book, let alone one of the most loved American books of ALL TIME, and turning it into a graphic novel.  Most of the time, graphic novel adaptations of classics are…let’s just say not great.  This one, though, is utterly fabulous.  I would probably sooner hand a kid this graphic novel then the original book!  Heresy, you say?  No!  It’s really just that good.  Shanower and Young take such a beloved tale, and stay utterly true to it while depicting it in a way that makes it even more beautiful and approachable; and they don’t just stop there!  They tell further stories of Oz.  Ones that aren’t as familiar, but just as imaginative. I really, really, love these books.

My favorite graphic novel series, hands down.  Nothing else even comes close.  In my opinion, the whole genius of this series hinges on the genius of Babymouse as a character.  Yes, I love the plots, I love the intrusive narrator, I love the drawings of her crazy daydreams, I love her friends, family, and enemy (booo Felicia Furrypaws!) but when it comes right down to it, what I love most about this series is Babymouse herself.  Her crazy imagination and her crazy resilience.  She just keeps chugging along even when everything is going awry.  Most of all, she is so authentic.  She reminds me what it was like to be in Middle School, even though she’s not even human. The way she’s drawn AND the way she’s written work hand in hand to create what, in my opinion, is one of the greatest characters in all MG literature.  Yay Babymouse!

There’s a quote on the back of the Lunch Lady books from a girl named Gracie.  Gracie says, “It’s an action-packed book of yellowy wonder.”  I really don’t think I can improve on that description of this great Graphic Novel series.  Let me just say that I adore the way Krosoczka takes one of the most seemingly benign people in the world, the lunch lady, and turns her into an awesomely resourceful, save-the-day heroine.  I love all the food-related gadgets (Fishstick nunchucks FTW!); sidekick, inventor, computer expert Betty; the light mysteries; the action scenes; and how Lunch Lady’s exclamations of choice are always food dishes.  Finally, if I were to pick one graphic novel series that I think I would have enjoyed most as child myself, this would be it.

7. Zita the Spacegirl by Ben Hatke 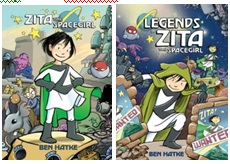 (Second title: Legends of Zita *might* be published by the time you read this)

Guys, in case you couldn’t already tell, I love the Wizard of Oz.  LOVE that story to death.  I am so fanatically devoted to it, that I don’t always appreciate (ahem, rarely ever appreciate) people trying to mess with it.  Well, in walks Zita, which, why not exactly the story of The Wizard of Oz, sure does have a lot of thematic similarities.  But, let me tell you, Hatke does it right.  From a main character you root for to quirky sidekicks, to a mission with meaning this is one heck of a fun ride.  All the while, he remains true to the spirit of Oz while making this GN his own thing.  Let’s just say I think Zita and Dorothy would be the best of friends.

8. The Olympians by George O’Connor

O’Connor’s excellent takes on the lives of the Greek gods make common and not-so-common myths seem so much more approachable.  He gives these (let’s face it) bizarre figures human motivations and a freshness that I’ve not seen in any other tales of Greek Mythology.  I feel like each book has been better than the last (loved how he dealt with Hades through the eyes of Persephone) and I can’t wait to read Poseidon! 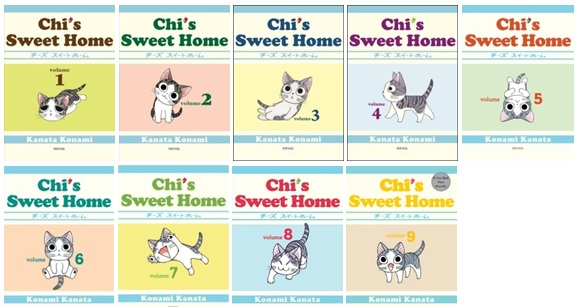 I couldn’t have a list of graphic novels without including at least *some* manga on it.  I’m not a huge fan of manga, I find most series really difficult to follow, but this series I love.  It’s about a family who finds a stray cat and is determined to keep him even though there’s a strict NO ANIMALS policy in their apartment complex.  Hijinks ensue.  *Warning* Chi has a tendency to speak in a bizarre sort of babytalk that some (including me) will find adorable and others will find excruciating.

Another hilarious graphic novel series.  I laughed so hard when I first read this title that I ran right home and read it out loud to my mother (I’m 26.  This doesn’t happen often).  Binky is your average housecat – except that he believes he lives in a space station.  His single-minded goal is to be able to build a spaceship and launch himself into outer space (the outdoors) and protect his family from aliens (bugs).  You would be hard pressed to find a literary cat with more imagination than Binky.

Hannahlily Smith is a Teen Coordinator at a large public library in east Tennessee. She is a new (but very avid) Nerdy Book Club member and reads more than is good for her health. You can find her on Twitter as @hannahlilys.

Like Loading...
← LESSONS ON OVERCOMING HARDSHIP FROM PETE THE CAT by Linda Tang You Don’t Have To Be A Grownup by Lisa McMann →