Goblin Secrets by William Alexander – Author Interview by Laura Given 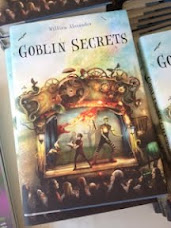 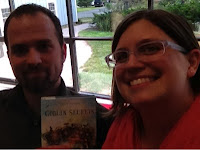 What it’s about (in one sentence):
In a world where acting is outlawed and masks have magical powers, young Rownie joins a troupe of goblins and searches for his lost brother.

Recently I met author William Alexander at a the annual Celebration of Minnesota Children’s Authors and Illustrators in Redwing, MN.
I wrote the sentence starters in purple, and William Alexander finished them

My ideas for the unique world of Zombay came from…
Where did Zombay come from? The Fiddleway Bridge came first, and the rest of Zombay grew up around it. (I love the picture of the bridge on the back of the hardcover dust jacket.) Some of the Fiddleway is based on the old London Bridge, which was basically a town unto itself. Shops and houses covered it and stood suspended between the two separate halves of the city. Other bits of the Fiddleway are based on the Charles Bridge in Prague, which is usually full of musicians, puppeteers, and other sorts of performers.
Once I knew about the bridge, more tidbits of made-up urban geography started glomming onto it and taking shape as Zombay City. The place formed just as dust bunnies do underneath the sofa, bit by bit around one long, lost hair.
This is the Dust Bunny Theory of Novel Writing. Once you have a good hair to bridge it all together, the rest of the story will begin to accumulate in the hidden, under-the-couch depths of your mind.
When I was in 4th-6th grade I loved to read…
…Fantasy and Mysteries more than anything else. In 4th grade I read Sherlock Holmes stories, and in 5th and 6th grade I found Ursula K. Le Guin’s A Wizard of Earthseaand Susan Cooper’s The Dark is Rising. These were tremendously important books to find. I built vast swaths of my mental landscape out of the books I read at that age. Most readers do. I’ve got a blog post about that somewhere…
Masks…
…let you try out new and unreasonable possibilities. Kids on Halloween aren’t just pretending. We dress up as monsters on the night that monsters traditionally go walking around. The kids are still kids, and the masks are still masks, but they become a third thing, an additional combination of the two, and that lets every single trick-or-treater figure out a new way of moving through the world. And afterwards you get to take off the mask and be yourself again. It’s perfectly safe. Really…
One more thing…
…Nobody knows where the phrase “break a leg” comes from, or why actors use it to mean “good luck.” Theories abound, but nobody really knows. If you think you’ve figured out why, please tell me! 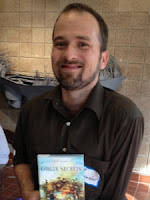 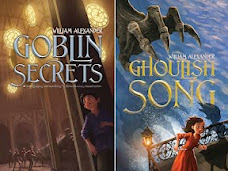 William Alexander studied theater and folklore at Oberlin College and English at the University of Vermont. His short stories have been nominated twice for the Pushcart Prize and published in various strange and wonderful places. His book Goblin Secrets was recently named a 2012 National Book Award Finalist. You can find him on Twitter here: @williealex. For more about Goblin Secrets–including a gallery of wearable masks–visit www.goblinsecrets.com.
Laura Given is a K-8 Library Media Specialist in Roseville, Minnesota, a reading for fun advocate and a collector of 5s. Find her on twitter as @LibLaura5 or on her blog www.LibLaura5.blogspot.com.