Picture Books—and Batman—Are for Everyone by Marc Tyler Nobleman

The day after Halloween, you don’t stop yourself from sneaking a piece of your child’s candy while thinking “Wait, I’m too old for a Fun Size Snickers.”

You liked one if not all of the Toy Story movies as much as if not more than people who actually play with toys.

And when you’ve taken your kids or nieces or nephews to the playground, you haven’t gone down the slide…but you have taken a ride on a swing.

Many hallmarks of childhood remain on-limits into adulthood…so why aren’t picture books one of them?

Because adults don’t like pictures. Or good stories. Or things that don’t take a lot of time, because no one is busy. 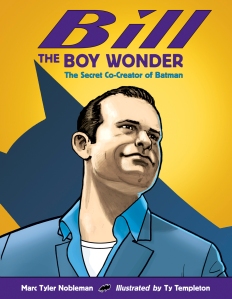 I’m the author of Bill the Boy Wonder: The Secret Co-Creator of Batman, the first book in any format on Bill Finger, the real mind behind the world’s most successful superhero and one of the most iconic fictional characters in world history. (Don’t believe that “Batman created by Bob Kane” credit you saw in The Dark Knight Rises.)

I describe Bill the Boy Wonder as a picture book for older readers (age 7 and up). It contains an author’s note longer than most you see in similar books—six small-print pages. And that author’s note addresses sophisticated topics. Which makes it all the more bewildering that some online reviews of the book praise it but at the same time criticize it because of what it is not: an “adult” biography.

Some people don’t see past the picture book format. For them, stigma overrides substance. We all know not to judge a book by its cover, but “You can’t judge a book by its thickness” hasn’t caught on yet. My Batman book may be thin, but it took more research than almost all of my other books…combined. And it contains a considerable amount of previously unpublished info, written up at kids and, I hope, engagingly for adults.

In 1939, Finger wrote the first Batman story, then hundreds more until 1965, including the first appearances of major characters including Robin, Joker, Catwoman, and Penguin. For most of that time, he worked anonymously—and therefore was not properly documented despite his cultural impact. In the 40+ years since Finger outed himself as the pivotal creative force of Batman, I was the first to write a book about him.

Of course, first does not automatically equal best. I’m the first to say I hope someone does write a longer biography of Bill Finger one day. I’d be happy to share my research—in fact, I already freely do, on my blog. But even if that book never happens, I (objectively) feel we will still have a pretty good resource on the subject.

And Batman, like picture books, is not the exclusive province of kids—or superhero fans. You could argue that it used to be that way, but like the rest of us, Batman has matured. There are still Batman stories for young children, but most versions of the character (from the films to most of the comics currently being published) are emphatically not for the audience most commonly associated with picture books. Most of the time, Batman is gritty and even scary. He’s not a two-dimensional cartoon. He’s as textured a character as anyone out of Dickens. It’s not just kids and geeks who are turning those Batman movies into blockbusters.

The adults table may be just for adults, but the kids’ table is not elitist. If you’re nice, you’re welcome. Childhood doesn’t end with growing up.

Marc Tyler Nobleman is the author of Boys of Steel: The Creators of Superman and Bill the Boy Wonder: The Secret Co-Creator of Batman. His next books will also be quirky nonfiction but will not involve capes or tights. He’s invited to speak at schools, conferences, libraries, and other venues nationwide, and he blogs about those experiences (plus research revelations, promotional gambles, and other publishing adventures) at http://noblemania.blogspot.com/.