It’s inevitable: I hand out the book and the kids collectively groan…Oh, we’re going to all read a book together. They show a bit of curiosity about the ghostly man walking down the train tracks on the cover, but then lose it when they start thumbing through and observe the format. I hear intakes of breath. Some murmuring. And then finally somebody speaks up. “What? This book is a bunch of poems?”

“Yes,” I tell them. “This book is written in verse.” More groans come.

After the first night of reading, they return to the classroom, ready to throw in the towel. “I don’t know what’s going on.” “I can’t remember which character is which.” “This is too confusing. Can we read something else?”

This is how I start off teaching Karen Hesse’s Witness every year. 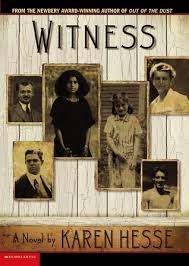 But the heart-wrenching tale of a 1920s Vermont town invaded by the Ku Klux Klan is one of magnanimous proportions that eventually delves its way into and ultimately captures their hearts. Attempted murder, blatant racism, violence against others, and rum-runners dodging their way through the Prohibition era dominate our classroom conversations. The students flip through pages, independently looking for quotes to support their arguments, rereading for clarity, and expressing anger at the short-sightedness of some of the characters.

They despise Johnny Reeves, the child-molesting Klan reverend who preaches hate to his neighbors. They wish Leanora, the only black girl in her town, would speak up and be more courageous. They want to protect Esther, the innocent 6-year-old Jewish child, from the atrocities of mankind. They go into an uproar when asked if  the town constable, Percelle Johnson, is doing his job or not. They question the bravado of the rogue teenager, Merlin’s stated intentions. And when the climax rises–when they recognize that this town can no longer be the same after a terrifying turn of events, they are stunned, saddened, and irate.

The narrative poems alternate between characters’ voices, each one written in stunning yet sparse language that clearly delineates the differences in the morals and perceptions of race, gender, and generation. For some students, it is the first time they have encountered truly abject characters in their literature and it is this bare-boned honesty in Hesse’s writing that sways their initial desires to abandon the book. Within only a few days they are, quite simply, hooked.

One year, as we read a section aloud, a girl interrupted me. “This is beautiful to listen to,” she said. “It’s like a play.” Another student chimed in. “Everybody should read this book. It’s so important.” And by the end of the week, this group of 7th graders, who so fiercely believed that their own small hometown must be made aware of New England’s brief history with the Klan, had contacted the local movie house and planned an entire live reading of Witness for the community to come and view.

It is this kind of reaction that students experience, without exception. Year after year, they can still quote characters and reference the overriding themes of prejudice, hate, and justice long after they have read the book.  They are a little less innocent–for Hesse has shown them the realities of raw hatred and the grace of forthright benevolence. And in the end, when they turn the final page, they sit in a brief moment of silence, with the knowledge that perseverance not only overcomes the duplicities of evil, but it can open unknown worlds of beauty and pain hidden deep in a book that they may not have picked up themselves.

When Angie Miller is not teaching 7th & 8th grade ELA in Holderness, NH she raises her children, goats, dogs, and chickens, writes, or disappears into travels and hikes. She is the 2011 NH Teacher of the Year, a TED speaker, and can be followed on Twitter at @angiecmiller74 and online at boundlessangie.blogspot.com.

Like Loading...
← Knot What I Expected by Suzanne Gibbs THE GLORIOUS GAME OF BASEBALL: A METAPHOR FOR READING AND WRITING by Margo Sorenson →