A World So Large with Possibilities by Toni Buzzeo

Just this past week, I spent three days at Ridge View Elementary School in Dexter, Maine with PreK, Kindergarten, First, and Second Grade classes. We sang, we performed puppet plays, we discussed illustration, plot, setting, and especially characters. But it wasn’t until Friday morning, when I met with the first of my second grade classes, that I remembered what a wealth of information and ideas and inspiration my readers can be.

I’ve just published a new picture book, Just Like My Papa (Hyperion, 2013), gorgeously illustrated by Mike Wohnoutka http://www.mikewohnoutka.com/. It’s the second in a trio of books about animals on the East African savanna, so of course, we were talking about the savanna, looking at photographs from my trips there, and discussing the shape of the trilogy. 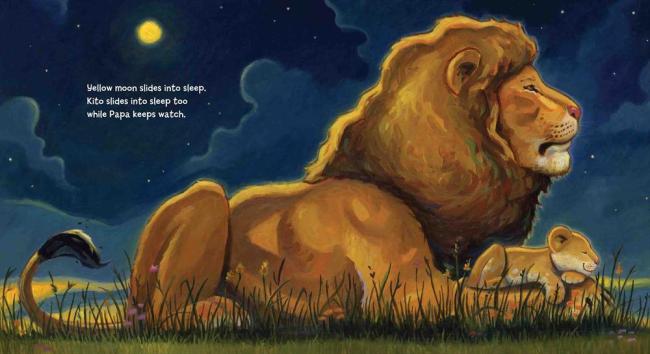 In Just Like My Papa, Kito, a lion cub, quite literally shadows his father, the king of the pride, in everything he does, from guarding the pride against ever-present dangers, to protecting the territory they occupy, to following the lionesses in the hunt, preparing to enjoy its spoils. Kito is enthusiastically devoted to his father, sometimes to the point of peskiness, but even the king of the beasts will take a few minutes to entertain his eager little fluff ball. A perfect Father’s Day book! 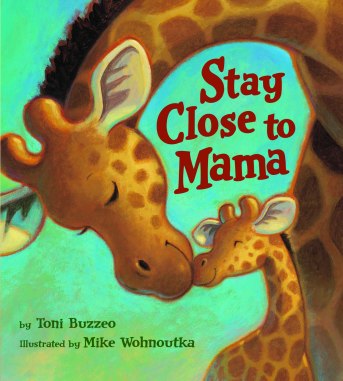 After discussing Just Like My Papa, we turned to the first book, Stay Close to Mama, featuring giraffes, who are naturally curious creatures. Twiga, a baby giraffe, is endlessly curious and puts himself, quite innocently, in many dangerous situations, threatened by hyenas, crocodiles, and leopards despite his mama’s repeated warnings to Stay close. Stay safe. 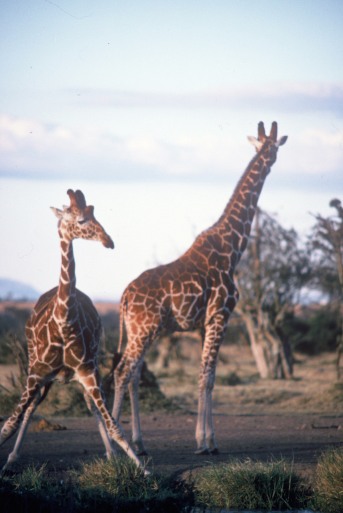 Finally, we turned to talk of the last book in the trilogy, My Grandma Always Remembers, which Mike is painting right now. As you will have guessed, it’s about a grandmother elephant, the matriarch of her family, and her little granddaughter elephant in the time of a serious drought. We talked about droughts and the need in families for one animal who remembers times long before where precious water and grasses could be found across parched and dusty plains.

Suddenly, one little girl piped up, rather passionately, with, “You actually need a fourth book about a grandfather animal.”

“I know,” I said. “But so far, I haven’t managed to find a single animal species on the savanna with a grandfather patriarch who remains with the family.”

There then ensued a lively and truly invigorating conversation about possibilities. Had I considered members of the wild dog family—though not, of course, hyenas, who are so unpopular. Or how about REPTILES? Snakes! There must be snakes aplenty on the savanna. Birds, perhaps, as they are so plentiful in East Africa and they do often mate for life? And what about INSECTS? Those stinging ants in Stay Close to Mama—might the hive actually have a king in residence rather than a queen?

Oh, in those seven or eight minutes the world seemed so large with possibilities.

And that is it, isn’t it? It’s one of the things I love most about kids. The world can be quite limitless when you are eight years old, or nearly there, seven and three quarters, perhaps. Kids don’t quickly shut doors as we sometimes might. They fling them open, one after another after another. What about THIS? Or THIS? Or THIS? Or how about THAT too?

So, I’m on a hunt, so to speak, for patriarchs in the animal kingdom of East Africa. If you’re an eight year old—or just think like one—feel free to toss me an idea. Maybe Mike and I will have a quartet of books after all!

Toni Buzzeo is a former school librarian, so she comes by her love of books and kids quite naturally. In fact, it was while teaching at Longfellow School in Portland, Maine that she began to write for children, right after her first trip to Kenya in 1995. She has published nineteen picture books thus far, with two more under contract, including My Grandma Always Remembers. Toni’s book One Cool Friend, illustrated by the distinguished illustrator David Small, won a 2013 Caldecott Honor. Many of her other books have garnered award attention as well. Toni and her husband live in Buxton, Maine from May through December, where she writes in a lovely writing cottage above the brook. But just after the winter holidays each year, she high-tails it down to sunny Sarasota, Florida where she can listen to the birds singing outside her office window during the day and zip over to walk the beach at sunset.

Find Toni online at www.tonibuzzeo.com and watch the video of that sweet writing cottage being built!