Home » New Book Reviews » On a Beam of Light: A Story of Albert Einstein Written by Jennifer Berne, Illustrated by Vladimir Radunsky- Reviewed by Stacey Shubitz

On a Beam of Light: A Story of Albert Einstein Written by Jennifer Berne, Illustrated by Vladimir Radunsky- Reviewed by Stacey Shubitz

It’s not every day that a movie gets filmed in Princeton, NJ. However, when the movie is about Albert Einstein, then where else would a big budget movie choose to film other than the town where he lived and worked for so many years?  Therefore, when Walter Matthau, Meg Ryan, and Tim Robbins filmed “I.Q.” in Princeton in the early 90’s, the entire area was a-buzz.  I attended school there at the time and didn’t care about traffic jams since I was told one could often see Mr. Matthau, dressed as Albert Einstein, walking down the street eating an ice cream cone.

On a Beam of Light: A Story of Albert Einstein is written by Jennifer Berne and illustrated by Vladimir Radunsky, makes genius Albert Einstein seem accessible to those who sought to understand him.  Readers learn that Einstein was a late talker who questioned everything once his expressive language developed.  Einstein was disruptive in school and was told “he would never amount to anything unless he learned to behave like all the other students.”  As an adult, Einstein believed no one could make him wear socks so he used to walk around town in shoes without socks. 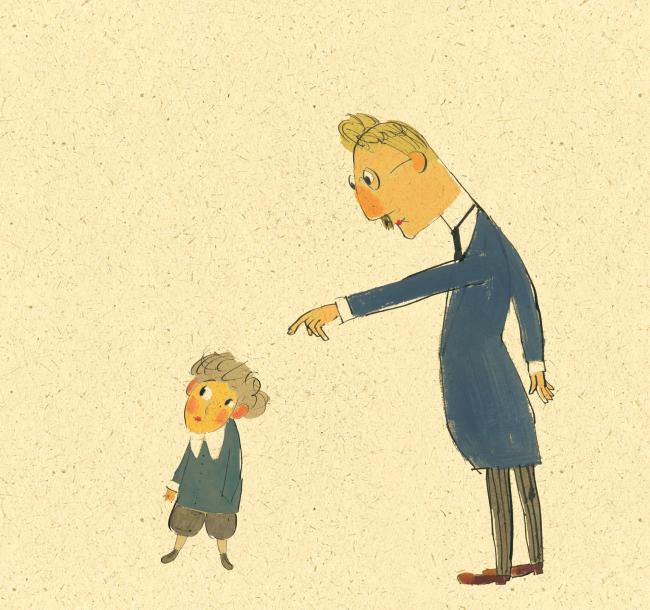 Besides establishing Einstein’s softer side, Berne helps young readers understand Einstein’s curiosity for things that puzzled him and his passion for information.  Berne wove Einstein’s unwavering curiosity through all stages of his life.  Early on we see a boy who questions everything.  He grew into a government worker who spent extra time thinking and wondering.  Eventually he became a professor who rode a sailboat and played his violin when he wanted to think or tackle complex problems.  By highlighting the importance of thinking and wondering throughout the book, readers are able to understand how Einstein’s ideas were able to bring about change, spur new inventions, and help people better understand the universe.

On a Beam of Light’s unique design contains pen-and-ink illustrations.  They show the loving family Einstein was born into in Germany and the ice cream cones Einstein ate while walking around Princeton in baggy sweaters.  The illustrations depict equations, as well as visuals that make hard-to-understand concepts (e.g., “everything in the world is made up of atoms”) accessible for young readers.  Radunsky uses speech bubbles to inject humor into some of his illustrations.  The drawings have a playful quality to them, which make them an additional way to bring Albert Einstein to life.

There are two pages of notes at the end of the book, which include more information about Einstein’s personality, the infamous E = mc2 equation, and about his discoveries leading to the atomic bomb (which he never wanted to see used since Einstein was a pacifist).  A list of additional resources is also provided so readers can learn more about Einstein.

On a Beam of Light: A Story of Albert Einstein would make an excellent addition to any biography unit of study in reading or writing workshop.  In addition, it’s an inspiring book for science teachers to share with their students.  Young people can also engage in discussions with their teachers about accepting differences, the importance of curiosity, and the value of hard work.  In addition, Einstein’s life serves as a reminder to us all that imagination and taking time to just think are critical for greatness.

Stacey Shubitz is a Pennsylvania-based literacy consultant and a former elementary school teacher.  She is the co-author of Day by Day: Refining Writing Workshop Through 180 Days of Reflective Practice (Stenhouse, 2010) and the Two Writing Teachers blog.  Last year Stacey started a personal blog, Raising a Literate Human , which is about raising a toddler to be literate in both the word and reading the world.  She can be found on Twitter at @raisealithuman.