Posted by CBethM on October 29, 2013 in Author Posts | Leave a comment

Reading was always an important part of my childhood. Whether it was for school, for fun, or in between my extracurricular activities, I always carried a book (or several!) with me every day. Sometimes that meant having to cram a book into a backpack already overflowing with costumes, dance shoes, and music, or running around backstage to find a quiet spot in which to read – but I always found a  way.

When I was young I always had a passion for all of Roald Dahl’s books. Each and every one was full of excitement, and they always took me to another world! Like many kids, “Charlie and the Chocolate Factory” was my favorite book from my childhood (and I also loved both the movies!)

In some ways, I felt just like Charlie when I got my chance, except my golden ticket was a plane ticket to New York City, and a chance to audition for the Broadway show, Billy Elliot. Just like Charlie, I had to go somewhere new and strange, which was scary and exciting all at the same time. Up until that moment, my life was about as quiet as you’d imagine for a middle-schooler from the Midwest. Nothing I had ever experienced could have prepared me for the challenges and rewards that lay ahead of me – but that’s the awesome thing about books. A great book is a chance to live in someone else’s shoes for a while. I might not have been ready for New York City, but I’d seen Charlie rise to the challenge of the Chocolate Factory, and it gave me the courage to face my own obstacles.

The awesome thing about books is that they let you experience things you might never get to otherwise – and sometimes, they show you how to go out and do it for yourself! That’s why I decided to write my own book, Alex Ko: From Iowa to Broadway. 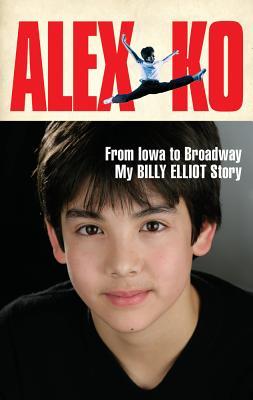 Alex Ko made his Broadway debut at age thirteen in the title role of Billy in the Tony Award-winning Billy Elliot: The Musical. Alex studied dance from the time he was five years old, and at the age of twelve he was the youngest student admitted to the University of Iowa Dance Department, where he received college credit with honors distinction. Alex was guided by ballet masters Eloy Barragán and George de la Peña in Iowa City and by Peter O’Brien and Wilhelm Burmann in New York City. Alex has had the distinct honor of being a guest dancer at the White House and has appeared on ABC Family’s Bunheads. Alex has won national and regional dance titles and is a USA gymnastics champion coached by 1996 Olympic gold medalist Dmitri Trouch. His autobiography was published by Harper Collins on April 30, 2013. You can find more about about Alex by reading his book or by checking out his website at http://www.alex-ko.com.