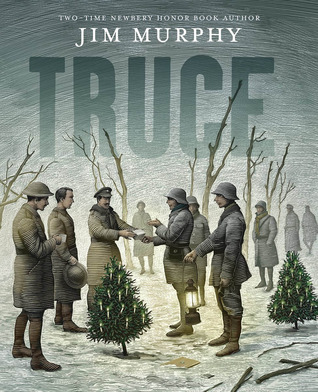 Ninety-nine years ago, and five months into what would become known as the First World War, a remarkable series of events occurred  along the trenches on Christmas Eve and into Christmas day.  In many places along the 475 miles of the front, soldiers began making unofficial truces with the enemy.

In Truce Jim Murphy has drawn a fine thumbnail sketch of the beginning of The Great War and how it quickly resolved into defensive lines of trench warfare in the face of modern weapons.  Murphy’s meticulous attention to detail in his research is apparent as he weaves together vivid firsthand accounts and photographs of the terrible conditions in which soldiers on both sides found themselves, and of the futile attacks launched through the “No Man’s Land” between the trenches.

Conditions and losses were so terrible on the front that on November 23, 1914, Winston Churchill wrote in a letter to his wife: “What would happen, I wonder, if the Armies suddenly and simultaneously went on strike and said some other method must be found of settling the dispute?”

This background leads up to the events on Christmas Eve in those trenches where soldiers on both sides, sometimes only yards apart could hear their opposite numbers singing carols.  The dawn of Christmas Day brought with it many individual incidents of fraternization along the hundreds of miles of the Western Front.  What would become known as The Christmas Truce was unlike any wartime truce before or since.

The inevitability of the war was not evident that day because those who were charged to fight simply agreed not to do so.

While the truce stretched on for days and weeks and even months in isolated pockets of the front, Churchill’s question was sadly never answered.  Four years of brutal warfare followed the Christmas Truce, without further interruption.

This book offers both a powerful and complicated view of history – and the potential for the reader to view their present in a different light. Instead of simply accepting the situations at hand at face value, these soldiers chose to decide their own fates on that day, far different ones than they had experienced thus far in the conflict. Why then should we readers assume that whatever negative situations we have experienced thus far need to continue to be our reality? We, like the soldiers, can choose to rise above the fray.

David Walthour is a retired German Reformed Pastor and an avid, omnivorous reader.

Cindy Minnich is lucky enough to live the charmed life of a high school English teacher, mom to one future librarian,  wife to a fellow reader, and daughter to David Walthour. She can be found on Twitter as @cbethm, on web at http://www.chartingbythestars.com, and in real life on her princess chair enjoying a book and a cup of coffee.