What a great year to be a reader of nonfiction!  When the Nerdy nominations were announced for this category, I immediately started reserving books at my library that hadn’t already been read.  What a treat I’ve had the past few weeks, immersing myself in fascinating topics!  But the Nerdy Book Club voters have spoken, and have actually created a first for the Nerdy Awards – all five of our winners are biographies!  Each of these biographies is a tribute to someone who was brilliant, and dared to look at life differently.  So, with no further ado, here are the titles you have selected to win the 2013 Nerdy Award for best nonfiction picture books. 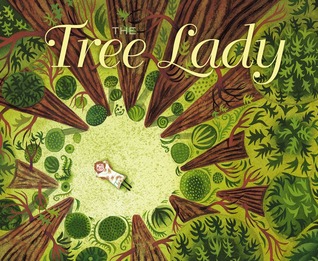 The Tree Lady: The True Story of How One Tree-Loving Woman Changed a City Forever Written by H. Joseph Hopkins; Illustrated by Jill McElmurry

The Tree Lady shares the story of Kate Sessions and how she changed the landscape of San Diego, California, forever.  From an early age Kate was fascinated by science and living things, especially trees.  This book tracks Kate’s life from student to teacher to master gardener.  When Kate first arrived in San Diego after graduating from college, it was desert land, with very few trees visible.  In the course of her lifetime, she changed that landscape, by researching and then planting trees that could grow in San Diego’s climate and soil.  Her best know achievement is populating Balboa Park with trees for the Panama-California Exposition in 1915.  The author makes great use of repetition, sharing multiple ways that someone didn’t think a task could be completed, and then following that with, “but Kate did.”  The power of Kate Sessions’ perseverance is in evidence throughout this story, and makes it an important book to share with children. 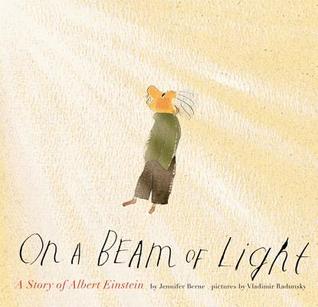 On a Beam of Light: A Story of Albert Einstein Written by Jennifer Berne; Illustrated by Vladimir Radunsky

On a Beam of Light underlines the power of wondering, thinking, and imagining.  Those readers not familiar with Albert Einstein might be shocked to find out that he didn’t speak at all until after he was two; in fact, he only spoke a few words when he was three years old.  It turns out Albert was saving all his words for the questions he had about our universe.  When his teachers said he asked too many questions, he turned to books to find the answers (maybe a Nerdy Book Club member?).  And he spent all his spare time studying the questions of interest to him.  In the Author’s Note, she has included more specific information about some of the topics of particular interest to Einstein.  This is a wonderful story about the importance of making time to pursue and study topics that are of interest to you. 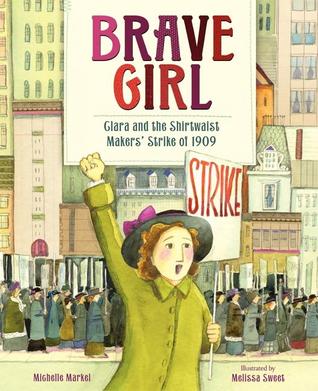 Brave Girl is a wonderful story about being brave and standing up for what you believe.  The main character, Clara, is an immigrant to the United States with her family in the early 1900’s.   When her father can’t find employment, Clara finds work at a garment factory.  This story gives the reader an insight into the horrible conditions under which Clara, and women like her, were forced to work.  More importantly, the story by Michelle Markel shows how one person can start a movement destined to change lives forever.   The illustrations by Melissa Sweet accompany the text with perfection. 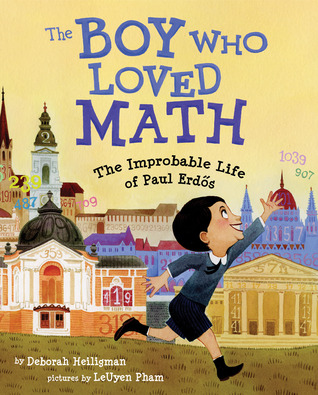 The Boy Who Loved Math: The Improbable Life of Paul Erdos Written by Deborah Heiligman; Illustrated by LeUyen Pham

The Boy Who Loved Math tells a story of a famous mathematician who continually pushed the thinking of himself and others.  The author includes numbers quite cleverly, and often, within her text, reminding the reader of Erdos’ love of numbers.  He was a fascinating dichotomy – he had a total inability to follow institutional rules (like those of school or his governess), but he adored the rules of numbers.  And though he was brilliant, people cared for him his entire life – they cooked his food, did his laundry, and paid his bills.  What great conversations these pieces of information would elicit!  One of my favorite pages in the book is an illustration of how people were connected to Erdos with math; they were actually given an “Erdos number” based on how far removed their math work was from Paul.  It reminded me a bit of “Six Degrees of Kevin Bacon,” only with a mathematical twist.  When I got to the author’s note and the illustrator’s note, I spent over an hour reading and rereading this section.  Paul Erdos was quite a complex man, and it was fascinating to get to know him in more depth. 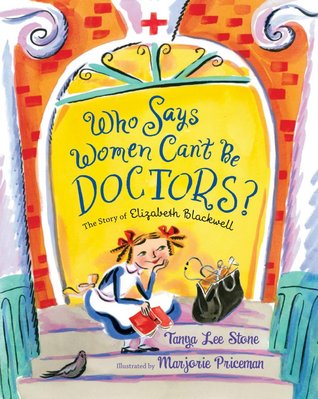 Who Says Women Can’t Be Doctors: The Story of Elizabeth Blackwell Written by Tanya Lee Stone; Illustrated by Marjorie Priceman

Who Says Women Can’t Be Doctors is a story of a woman who wouldn’t take no for an answer when the question was whether or not she should be in medical school and become a doctor.  Interestingly enough, early in life, blood actually made Elizabeth queasy and she had no drive to help the sick, including herself.  But once the seed was planted that she should be a doctor, Elizabeth didn’t back down from the challenges facing her – many rejection letters from medical schools, the taunts of her male classmates once she was accepted to Geneva Medical School, the townspeople non-acceptance, and other doctors being angry once she graduated.  The author’s note at the end shares some rich specific information about what Elizabeth accomplished in her lifetime as a doctor.   This is a powerful story about what a person can achieve even when others are naysayers.

Karen Terlecky is a 5th grade language arts teacher who loves to read and considers read aloud in her classroom as her favorite part of the day.  Over the holiday break, when her family gathered together, it was wonderful for her to see that in the quiet moments, both her daughters (ages 26 and 23) still love to pick up a book (or a Kindle) and get immersed in a story.  Karen can be found on Twitter at @karenterlecky and at the blog she shares, Literate Lives (http://literatelives.blogspot.com).