It has been an amazing year in the world of YA.  The five books honored with Nerdies in YA Fiction certainly demonstrate that YA literature is experiencing another golden age. Three of the winners take a look at the past, one fast forwards to a chilling future, and another explores the very present.  No matter the time and the place of these novels, each one presents a teen finding her way through seemingly insurmountable difficulties.  Be forewarned, though, if you crack open any of these five books, you must be prepared for marathon reading.  These books grab you by the heart and hold you fast within their clutches.

Fans of this dystopian trilogy waited with bated breath following the shocking revelations at the end of Insurgent.  In Allegiant, Roth delivers a final examination of a futuristic civilization divided by factions and controlled by ruthless leaders.  Alternate chapters are narrated by Tris and Tobias as they leave the world they have always known and travel into the uncertainty of the land beyond the fences.  It is there that more startling discoveries once again draw the pair and their friends into political intrigue fraught with danger.  Intense, suspenseful, and ultimately  heartbreaking, Roth pulls no punches as she brings the trilogy to its conclusion. This brief book trailer sets up the final installment with its hint of what is to come:

Rowell sets her story in the 1980s, not history for many of us but a distant past for our teen readers to be sure.  However, here is a story for the ages: a story of friendship and love, a story of abuse and neglect, and a story of redemption and survival.  Eleanor is rescued when a reluctant Park offers her a seat next to him on the school bus on the first day of school.  This simple act evolves into much more as the school year progresses and Eleanor and Park come to know more about one another.  Eleanor learns what it is like to trust another person with the darkest secrets of her life.  Park, in turn, comes to understand what he must do to help Eleanor.  Dual narrators serve to heighten the suspense and the budding romance between Park and Eleanor.  A hint of the lyrical language of the novel is evident in this short book trailer:

Yes, a second book by Rowell is a Nerdies Finalist.  And this book demonstrates the range the author brings to her work.  Meet Cath, a quiet, shy young woman who is heading off for her freshman year in college.  There she is separated from her twin sister for the first time. Cath feels she has been set adrift. The only comfort she has is from her work on a fanfiction novel based on a popular series.  College will bring many new experiences for Cath including new friends and perhaps romance.   Rowell includes Cath’s fanfiction between many of the chapters to provide readers glimpses into the inner life of her introverted protagonist.  Here is a link to a very short book trailer for the novel: 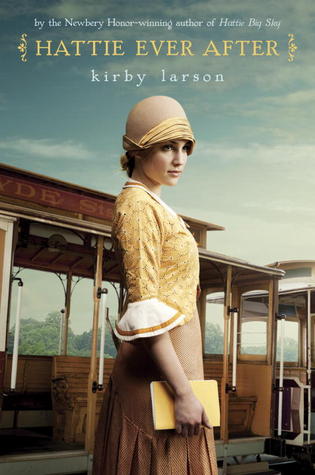 Hattie Ever After by Kirby Larson.  Delacorte Books for Young Readers.

Hattie’s story began in the Newbery Honor winning Hattie Big Sky. Now, Larson brings readers along as Hattie leaves home (Montana) and travels to San Francisco working as a seamstress for a traveling vaudeville group.   Once in the big city, Hattie begins to realize her dreams eventually writing for the San Francisco Chronicle about women in the workforce during  WWI.  Through Hattie’s eyes, readers will experience romance, betrayal, friendship, and so much more.  Larson’s vibrant characters and attention to detail, particularly about the bustling San Francisco of the time, brings history to life for readers.   Here is a video of a booktalk about Hattie’s story:

Out of the Easy by Ruta Sepetys.  Philomel/Penguin Books for Young Readers.

Sepetys’ first novel Between Shades of Gray, was on the shortlist for the Morris Award presented for outstanding debut novels.  In her sophomore effort, Sepetys takes readers into the Big Easy, New Orleans, in the 1950s.  Josie is 17.  Her mother works in one of the brothels outside of the city., a fact that makes Josie an outcast.  She lives above a bookstore where she works part time as a clerk hoping to set aside enough money to leave New Orleans and attend Smith College.  Unfortunately, Josie’s mother owes money to a crime boss who targets Josie for repayment of the debt.  Intrigue, danger, and suspense will keep readers turning pages as they worry about Josie’s fate.   This interview with Sepetys discusses some of her process in writing this novel:

Teri Lesesne is a professor in the Department of Library Science at Sam Houston State University in Texas.  She is the author of 3 professional books: Making the Match,  Naked Reading,  and Reading Ladders.  She maintains two blogs as well:  http://professornana.livejournalcom and www.ls5385blog.blogspot.com.