Writing About the Holocaust by Rabbi Rafael Grossman

I was in the fifth grade when the Second World War ended. My family had moved to a small town in New Jersey, but during the week, I lived at a yeshiva in Brooklyn. One day the school principal came into our class to tell us that the yeshiva would take in fifty boys, orphans who had survived the Holocaust. All the yeshiva schools in New York with dormitories had agreed to take in as many young Holocaust survivors as possible.

One of the boys who came into my class had nothing with him, except for a small, tin box. He never let it out of his sight. We later discovered that inside the box was a bar of soap. He believed that the soap, manufactured by the Nazis, was made from the body fat of Jews murdered in the death camps.

And he believed that maybe, just maybe, that bar of soap contained his parents’ remains. He said he didn’t have anything else from his parents, not even a photograph.

It’s a story I never forgot because if my parents had stayed in Europe, I could have been that boy.

As an adult, I became the rabbi of one of the largest Orthodox synagogues in the United States, Baron Hirsch Congregation in Memphis, Tennessee. I repeatedly told this story to my congregants, but I never had the time to write it, so eventually I entrusted it to someone whose skills I respected. The person I entrusted it to, a congregant at the time, chose to write the story as a book for middle grade readers. Because I believed that sixth graders and older needed to know as much as possible about what happened to the Jews during the Holocaust, I was comfortable with her choice. 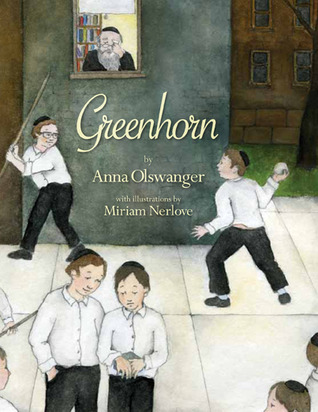 The writer didn’t have my memories. She asked me what seemed like hundreds of questions, and because I may have forgotten some details, and because she may not have gotten every detail right, in the end, she called the story a novel. She titled it Greenhorn, and although it is a novel, it’s essentially a true story, one that portrays the human condition, for better or for worse.

Greenhorn was published a year ago. Now it’s being developed into a film. Greenhorn delivers a painful message, that even the most cultured people, the Germans, were capable of perpetrating atrocious and despicable acts. But it’s a book that also confronts Holocaust deniers, people like Mahmoud Ahmadinejad, the president of Iran, who even today says that the extermination of six million Jews during World War II was a fabrication, people like Willis Cato and the Institute for Historical Review, David Duke, David Irving, Hamas leaders, the Syrian government, the Palestinian Authority, all of whom have claimed that the Holocaust did not take place—even when the Germans have not denied it, and those in other parts of the world who aided the Germans have not denied it.

But Greenhorn goes beyond confronting Holocaust deniers. The fact that a hunted people was able to survive and remain a people, and not only remained a people, but did something that they dreamed of for 2000 years—establish their own country with the capacity for protecting themselves—was a victory for humankind. What the Jews did became a source of hope for people in Rwanda, in Dafur, Sri Lanka, Cambodia.

Rabbi Rafael Grossman is a past president of the Beth Din of America and the Rabbinical Council of America. The story of his childhood friend and the tin box is the basis of the middle grade novel Greenhorn by Anna Olswanger. For more information about the Greenhorn film, please visit www.olswanger.com/greenhorn/filmproject.shtml.