Often, when I visit schools, I explain to kids that one of the very best things about writing is that it gives me the power to rewrite history, a chance to tell my own story the way I wish it could have happened.

I say, “You know how you always think of a perfect comeback three minutes after the mean kid walks away?  Well, if you write a story about that moment, you have time to dream up the perfect comeback!”

With my last two books, this has been especially true for me. With Bigger than a Bread Box, I had the chance to revise my childhood memories of divorce.  To add a bit of magic, and say the things to my parents I didn’t say when I was a kid.  It was a deeply satisfying feeling to give them each a copy of the book, and say, “Here, this is my version.”

With Seven Stories Up, I went further back and attempted to alter a different family drama.   I revised my grandmother.

When I was very young, my grandmother was my favorite person. She loved me, of course, but beyond that, she spoke the language of kids.  Grandmother was a children’s librarian, and in a lot of ways, she was at her best with people my age.  She and I would take long walks and notice tiny things together—tide pools or fall leaves.  She talked with me, in respectful ways, about fairies and magic.  She liked to play dress up, and have tea parties. She loved to read with me in her lap.

But then I grew up and her lap wasn’t big enough anymore.

At about that time, I began to notice that Grandmother didn’t get along with my mom very well, or any other grownups for that matter.  She was demanding. She was critical.  Sometimes she seemed very selfish.  After her husband passed away (my step-grandfather, a very kind and patient man), she seemed angry most of the time.  She explained to me that the world didn’t understand her.  That the world wasn’t sensitive to her.  And that people had always been like this—out to hurt her. Thoughtless. Cold.

As time went by, she walled herself off from her children, her neighbors. She would tell me she had “special relationships” with people she barely knew—a waitress at a restaurant she liked, a bag boy at the grocery store—but she seemed incapable of being close to anyone. It was painful to watch.  And since I was now a grownup myself, I was on the other side of that wall.  I’d forgotten how to speak her language, how to have tea parties.  Though I tried to maintain contact, it was difficult.  It’s hard to love someone who is always hurt, always angry.

I’ll forever wonder what might have happened to Grandmother if she’d been born a few decades later, in an age of therapy and medication.  I have no doubt there’s a word now for what made her so unhappy, a syndrome of some kind.  But whenever we tried to get Grandmother to see doctors, the walls went up even higher.

Then, about eight years ago, she disappeared. Nobody could reach her by phone.  Nobody had seen her in weeks.  Her answering machine was full.  So we began to hunt for her, and at last we found her in the hospital. She was dying.  We flew out to see her one last time.

In the hospital, she was angrier than ever. But sadder too, and finished.  It was heartbreaking.   She’d been thwarted, it seemed to me.  Cheated out of so much of her life. She was so worn down, and yet she spent her energy on resentment.  It was like she was burning herself out in anger.

That week she told me a story, about how, as a girl, she’d been sick. She’d had rheumatic fever, and her parents had locked her away, in a hotel room (they owned the hotel).  She claimed nobody came to see her. Her mother went off to a wedding, on vacation, and took her sisters along.  Nobody thought about her at all. Nobody cared. Nobody remembered she was even there. She told me this story more than once.

Her heart failed.   Weakened in part by the very illness that had quarantined her, trapped her away as a child. So that was the end of her story. I went home, cried, then had a baby, lived my life, wrote books, carried on. As one does.  She’d forbidden us to even have a funeral for her.  What could I do?

Still, for years her story echoed in my head—I couldn’t shake the image of a little girl alone in a room.

My great aunt assures me it’s not entirely true. That she wasn’t left alone.  That she seemed fine at the time.  But it doesn’t much matter, does it?  In Grandmother’s internal narrative, she was abandoned, and that caused her great pain, then  rippled through the rest of her life.  From that day forward she felt alone, misunderstood, mistreated.  And in her final days, she tracked it all back to that room in the hotel.

Which made so much sense of the imaginary games, the tea parties we’d shared. The fact that children were her favorite people.  She’d spent her life trying to recreate the childhood she felt she’d missed out on.

So, since I couldn’t let go of the memory, I set out to rewrite history.  I asked myself what would have happened if the quarantine had been broken.  What difference might one true friend have made in Grandmother’s lonely life?

I tell kids all the time: you only need one friend.   And I believe this, deeply. In my own childhood this was absolutely true. As a kid I could handle any amount of bullying, aloneness, or family drama, because I had one real best friend. One person who thought I was the most awesome person in the world. Even if my jeans were cheap and I was no good at kickball. 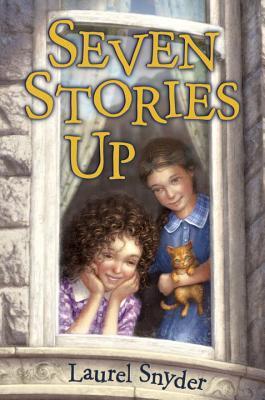 It seemed to me that what Grandmother had been missing was such a friend, so I decided to time travel, to meet her in a hotel room in 1937.  To see what would happen if someone was there, to hold her hand.   In the end my historical revision became a book, which I called Seven Stories Up.  In its pages, I let Grandmother out of the hotel, sent her on romps through the streets.  I took her roller skating and up on a Ferris wheel. Midnight raids on the kitchen.

This isn’t enough, of course. It doesn’t make up for her actual unhappiness.  And it makes me sad that I can’t share the book with her, can’t hand her a copy and say, “Here, I made this for you.”  It makes me sad she doesn’t know.

But it also makes me happy.  I look at the book, with her lovely lonely portrait in the back, and I think that it is just the kind of book we’d have read together, she and I.  Because even when people let Grandmother down, books didn’t.

Grandmother believed in books.  They were her friends.  They were constant and thoughtful.  They kept her company.  Beyond that, books were magical, with the power to do amazing things.

So maybe, just maybe, she does know.  The grownup part of me knows that’s silly and impossible.  But the kid part of me, the part that understood my grandmother, and believed in fairies, isn’t entirely certain.

The kid part of me can dream.

Laurel Snyder is the author of the middle grade novels Seven Stories Up, Bigger than a Bread Box, Penny Dreadful, Any Which Wall, and Up and Down Down the Scratchy Mountains, as well as a few picture books, including Baxter, the Pig Who Wanted to Be Kosher, Inside the Slidy Diner, and The Longest Night.

You can find her online at http://laurelsnyder or follow her on Twitter @laurelsnyder, and if you’d like to read the first chapter of Seven Stories Up, it’s available here: https://medium.com/book-excerpts/a32bc9c1f167