Home » New Book Reviews » Upside Down in the Middle of Nowhere by Julie T. Lamana – Review by Cathy Blackler 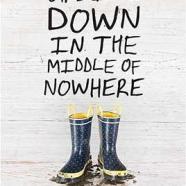 Upside Down in the Middle of Nowhere by Julie T. Lamana – Review by Cathy Blackler

On a recent trip to Las Vegas I observed a trio of adults set out from a Mini-Mart in the early morning for parts unknown. The fact that they were armed with backpacks and dressed in layers of clothing that had definitely not seen the inside of a washing machine in quite some time led me to decide that they were homeless. As I watched them interact with one another, a leader clearly apparent, I couldn’t help but wonder about the idea of a dystopian society.  A quick Internet search yielded this definition:

I sheepishly realized that for many, this is anything but imaginary; that there are people who exist in a dystopian society each and every day while many of us, myself included, carry on with business as usual. This startling insight helped me take a critical look at many instances where the reality of others is nothing like mine. I couldn’t help but recall the searing images of Hurricane Katrina.

In her debut novel, Upside Down in the Middle of Nowhere, Julie T. Lamana immerses her readers in the story of Armani Curtis. Soon-to-be 10 years old, Armani has high expectations for the big party that will celebrate her milestone. Anticipation swells, as does the weather, carried along by Hurricane Katrina. Armani makes a decision that will tether her to sorrow and regret as the impending storm intensifies, placing her and her family in a Lower Nines that looks and feels nothing like the one they have existed in; where they carried on, business as usual. Dehumanized and fearful, Armani’s journey becomes palpable. Readers will pause, weep, and struggle to make sense of a world that is difficult to grasp, all the while realizing that this is not dystopia, as we know it, and yet it is.

Lamana’s words come to life as she shares Armani’s story.

“An unexpected shiver made its way up the middle of my back. I stood there with myself soaking up the beauty of the mesmerizing sky. But then, without no kind of warning, the blue gave up and let the dark, thick clouds move back in. A soft rain started falling.

I seen the tree.

The tree lying across Daddy’s truck was one of Mam’s favorites-the big tree that shed a shadow as big as Texas across our whole front yard, keeping the blistering sun out of the house in the afternoons.”

As the levees break, the situation becomes dire, yet it is Armani who remains at the forefront of the story.

“The shoes that Memaw gave me to wear weren’t shoes at all. They were boots. The most horrible, ugly rubber roots ever made. They were navy blue with baby pee yellow polka dots. Memaw said they used to be her garden boots. I wanted to know why she didn’t bury them in the garden when she’d had the chance.”

Armani and her book-loving younger sister, Sealy, clinging to one another, are carried along with very little to keep them afloat. Their story is non-stop, as the weight of their journey does not let up.

In 2005, as I watched the unthinkable events of Katrina develop with disbelief, I was faced with an epistemological crisis. How could we, the greatest country in the world, dehumanize our own citizens? Our ugly secret of poverty, the marginalization of our own people, was flushed out from under the rug for the entire world to see. I was ashamed and horrified. And my sorrow was nothing compared to that of those who experienced the devastation, the dystopia, first hand.

Every reader knows the feeling of exhaustion when you are held captive by a story. The weight of the book is real, weighting you down, pulling you in. Such is the case with Armani’s story. Lamina has given readers an absolute gift.

“Upside Down in the Middle of Nowhere is a story of courage. It is a story of survival. But more importantly it is the miraculous power of hope and love in the face of the unthinkable.”

We all need to remember how “the miraculous power of hope and love in the face of the unthinkable” can help us weather many a storm. Thank you, Julie T. Lamana, for giving Armani’s story to readers. I for one will treasure it always.

Cathy Blackler teaches High School English in Southern California. A proud, card-carrying member of the #nerdybookclub, she served as her District’s Teacher of the Year during the 2012-2013 school year, is currently serving a three-year term on the California Young Reader Medal (CYRM) Committee, and was recently inducted into her High School’s Alumni Hall of Fame. She truly leads a reading life, and still owns the first book she purchased with her own money.

Like Loading...
← My Own Copy by Charlotte Cundiff The Top 10 Reasons Why I Can’t Stop Reading Children’s & Young Adult Literature by Emily Meixner →