I love reclaimed wood. The wall of my office is lined with planks from an old mill that stood for decades not far from the confluence of the Snake and Clearwater Rivers.

I hate the industry of reclaimed wood. Courtesy of hugely expensive furniture in high-end catalogs, farmers are now incentivized to tear down old family barns that measure time by generations. Not too many years ago, I climbed through a four story timber-frame barn built up against a regal white cluster one hundred and ten foot tall grain silos no longer in use, because people didn’t like the grain trains rolling through town.

A couple weeks after I climbed rough ladders up through those huge beautifully intact beams that didn’t show the slightest sag or weariness, men with chainsaws came through. They harvested even the memory of that place down to the concrete pad. Some of it might be in your last order from Restoration Hardware.

Can you tell that I’m conflicted? I want the beams. But I want the barns more. And they’re vanishing. After all, the world must be coffee tabled.

My taste doesn’t change when I write. But I’m less conflicted about it. I can sling a chainsaw over my shoulder and go wandering the great barns and mills and silos of the world of story. When I see beams in a Pizza Express (an Inn in Chaucer’s time) in Oxford, I fire up my chainsaw. When I see characters and themes and motifs and yearnings in myth and epic and fantastical history that still stand after millennia, I hunger and I ache and I go to work.

The stories that have survived centuries immediately attract me. Why are they still here? Is there something in them that appeals to humanity universal? What makes those beams so stout and strong that they can weather dozens of bad translations and centuries of (mostly) boring scholarship? What is it that sings in this character or that character? In this quest or that one? 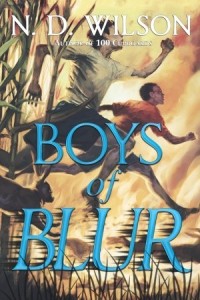 And can I…ahem…borrow it for a minute?

“The Ashtown Burials” series is a rather extensive buffet of reclaimed and modified story—beyond anything I had done before. I had a blast, and I’m a little sad to be marching into the fourth and final volume. The stories center on a museum-like place, and I wanted them to be museum-like themselves. But I’ll resist the temptation to start blathering on about every little thing I stole (correction: reclaimed) for that patchwork quilt. Instead, I will skip seamlessly onto the subject of my newest book.

Boys of Blur is a little different. In many ways, I was more careful with it than I have been with Ashtown. You see, with Blur, I didn’t want to strip assorted beams from assorted places. I was going to imitate and inhabit Beowulf. Full stop. It’s one of my favorite old stories, and I wanted to move new characters and new readers through that ancient envy-riddled mead hall in a new and swampy football-playing setting (complete with rings and ring-giving and heroic swagger).

And I wanted to do it explicitly enough that kids could see that I had.

The classics tend to be classics for a reason. Even when left to rot, empty in a field, without the old railroad traffic, we cannot understand where we are now without them. And the beauty of echoing them, of recasting them, of reclaiming their bones, is that doing so doesn’t erase them from memory or tear them down at all. It freshens. It preserves. It clears forgotten roads to forgotten places for young explorers with wide eyes, eager to taste the tales of forgotten generations.

But I’m still conflicted. I love those old timbers. (So long as the mill was falling down anyway…) And I hate fake wood grains. Faux classics. Prestamped boards. That red barn shed bought in a parking lot and dropped off by a truck. Sometimes. But more often I’m just a sucker…and the cynicism doesn’t stick.

And I am happy.

N.D. Wilson has published eight novels for children, all with Random House, and is raising five late-night readers in his own home (who are all unreasonably demanding more). He is especially fond of high winds, milk, and night-time. Boys of Blur is fresh off the RH grill.

Like Loading...
← The Loneliness of the Short Distance Writer by David Lubar Of Stanks, Swamps, Cane, and Courage: Boys of Blur by N.D. Wilson; Reviewed by Teri S. Lesesne →