I’m thrilled to be back at the Nerdy Book Club with another guest post. The last time I was here, I wrote about the beauty of bookshelves. (Update: finished my new bookshelves … they’re awesome!) 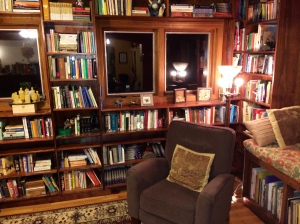 Today marks a very special day for me—after over nine years of writing and re-writing, my novel The Night Gardener finally arrives on store shelves! The Night Gardener is a Victorian ghost story about two abandoned Irish siblings who travel to work as servants at a creepy, crumbling English manor house. But the house and its family are not quite what they seem. Soon the children are confronted by a mysterious spectre and an ancient curse that threatens their very lives. More than just a spooky tale, it’s also a moral fable about human greed and the power of storytelling.

To celebrate my book birthday, I thought I’d write about four books that helped show me the way through my own story . . .

Something Wicked This Way Comes by Ray Bradbury

The first inspiration was Something Wicked This Way Comes. This is a chilling story is about two boys on the cusp of adolescence whose lives are threatened when a soul-stealing carnival appears in their sleepy Midwestern town. The language of this book can sometimes be a little florid, but the themes and imagery are worth the journey. At its core, Something Wicked is a moral tale about the price people will pay to hide from the things that frighten them most. My father first read this book aloud to me when I was eleven years old, and it scared the snot out of me. Indeed—it was during aSomething Wicked-inspired nightmare that I caught my first glimpse of the Night Gardener.

Those who know me know that I am a gigantic Burnett fan. The Secret Garden is not only a wonderful book, but it’s also a major inspiration for The Night Gardener. For those who haven’t read it, Secret Garden is about a spoiled girl who named Mary Lennox; after her parents die of cholera, she is shipped off to live with her uncle in a creepy old mansion called “Misselthwaite Manor.” Once there, she begins to realize that the people in this home are plagued by some mysterious tragedy from the past—and she takes it upon herself to discover the truth.  Burnett’s book perfectly captures two contrasting moods: gothic mystery and inspiring pastoral. The combination is nothing short of magical. While writing The Night Gardener, I used Burnett as a sort of guide for how to balance the light with the dark in terms of tone and mood.  Moreover, Burnett’s character of Dicken was a major inspiration for my own gardening hero, Kip.

The Sketchbook of Geoffrey Crayon by Washington Irving

Most people know this book as “the one with Sleepy Hollow and Rip-Van-Winkle.” A lot of people are familiar with the more famous stories in this book, but really the whole thing is worth reading. Like Burnett, Irving is a master of blending dark and light—finding ways to inject his ghost stories with humor and wit. At some point while writing The Night Gardner, I became lost in the gloom of the plot, and in desperation I went back to Irving. It was there I re-discovered a character I had all but forgotten: the roving story collector Geoffrey Crayon. Behind every tale hides Irving’s kind, mysterious narrator, who guides readers safely through the darkest valleys. Geoffrey Crayon became a major inspiration for my own story-collecting character, Hester Kettle … and it was through Hester that I was able to get to the most important question in The Night Gardener: what’s the difference between a story and a lie?

The last inspiring book is not actually a book at all; rather it is a speech entitled “Courage,” which was given by Barrie to the students of St. Andrews College in 1922. Barrie was addressing a crowd of young men who had just emerged from the horrors of WWI—it was meant to be the last public appearance he ever made. The speech is as brilliant and stirring as anything you might expect from the man who created Peter Pan. “Courage” is about a walking stick, a storyteller named M’Connachie, and what it means to fight for peace. Most importantly, it is about what young people are to do in a world in which adults have failed to care for them. “Courage” was the final piece of the puzzle for my own book. It helped guide me toward a better understanding of what it can mean to face fear, and what it means to move on from pain—both central themes to The Night Gardener.

That’s it for me! As I mentioned, The Night Gardener comes out today. If you like spooky stories with a little touch of humor, I’d love for you to check it out. And if you do enjoy it, I urge you to take a look at the books that inspired it!

JONATHAN AUXIER writes strange stories for strange children. His new novel, The Night Gardener, hits bookstores today—why not come to his book launch party? You can visit him online at www.TheScop.com where he blogs about children’s books old and new.