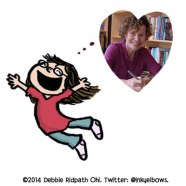 When I found out I was going to be illustrating Judy Blume books, I was immediately struck with both joy and terror. Reason for the joy is obvious … I mean… JUDY BLUME.
Reason for the terror? Well … JUDY BLUME.
I am longtime Judy Blume fangirl and felt the weight of immense responsibility at the thought of my illustrations helping a new generation discover Ms. Blume’s work. One of the challenges: to help update the visuals while still being aware and respectful of the original story. 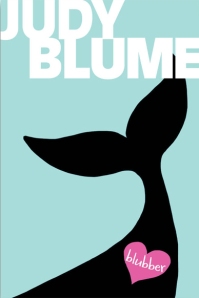 Some people have asked if I interacted much with Ms. Blume during the process of illustrating the middle grade covers as well as the interiors for the chapter books. I had no direct interaction with Ms. Blume through most of the illustration process; everything went through associate art director Lauren Rille and Simon & Schuster Children’s editorial first.
Ms. Blume did tag me on a few Twitter posts, though, and I was VERY excited each time she did. Once my husband was working at home at the time, and I yelled up to him, “GUESS WHAT GUESS WHAT? JUDY BLUME TWEETED ME!!!” 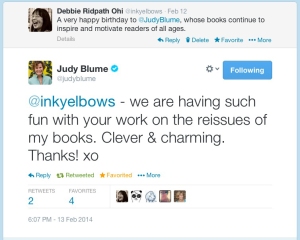 I also received a request from Ms. Blume before I started sketches: she asked that I make sure there was ethnic diversity shown in my illustrations of the students in the class as well as teachers. Yay for Judy Blume! This request made me very happy. 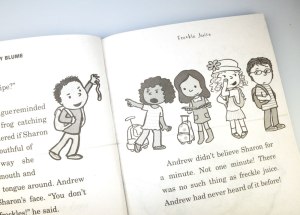 Before I started working on cover illustration sketches, I reread all of the books. I recall how Lauren and I marvelled at the fact we got to read Judy Blume books and say it was part of our work. I made a ton of notes as I read each book, and marked any potential cover ideas. I also had a list of illustration ideas for each book that people at Simon & Schuster Children’s had come up with. 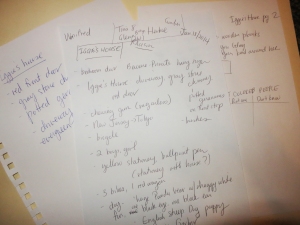 As I read, I was struck by how many of the issues and situations raised in Ms. Blume’s books are still relevant to young people today. And they’re such GOOD STORIES. The latter was a problem for me, to tell you the truth, because I kept getting sucked into the stories and forgetting to take notes. 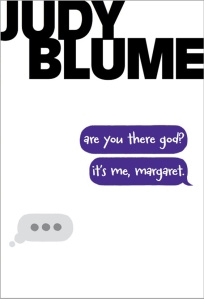 The new cover for Are You There God? It’s Me, Margaret has gotten a lot of attention. Some mistakenly attribute the wonderful new design to me, and I want to make sure that the right people get credit.
To better help understand the difference between illustrating and designing a book cover as well as interior pages, I asked Lauren Rille to explain her role in creating the new Judy Blume middle grade and chapter books, and how we interacted.
Lauren said that her role in the re-packaging of the Judy Blume chapter and middle grade books began brainstorming for a concept—a ‘look’ for the books. “The editor, publisher, creative director and myself knew we wanted a consistent series look for the middle grade novels, and that we wanted the slightly younger chapter books to visually link to those older middle grades, too, but look more appropriate for a slightly younger audience. Finding a concept that would work for older and younger middle grades, and for both genders, was tricky, but we eventually landed on a iconic approach, showing one image on each cover, against a solid background. We mocked up some rough versions of that vision in-house, and the editor then presented those to Ms. Blume for her approval. She liked that direction, and so we then began the hunt for an artist, which lead us to you!”
Once I got involved, the creative team at S&S told me about the concept and asked me to very roughly sketch out an icon for each book. The group in-house had spent a considerable amount of time coming up with a list of icons, or symbols, for each book that they thought best spoke to the essence of the book, but they also asked me to come up with any that I thought were good, that they’d overlooked.
I had already done a lot of sketches during the audition process. Here are some of the sketches I did for the cover illustration for Blubber: 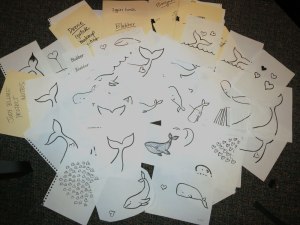 As I sketched away, Lauren started playing with text options for the author and title treatment, and investigating printing methods and special effects. “We knew we wanted these covers to really pop off the shelves, and so I met with our production manager to discuss printing options—foils, laminations, different inks, papers, etc.. We ultimately decided to print with Pantone colors, as opposed to a standard 4-color, CMYK production method, to be able to get those VERY vibrant colors that can only be created using the Pantone system. We played with that direction and decided to go with one Pantone color for the background, and one to be used as an accent on the icon, along with black and white.” 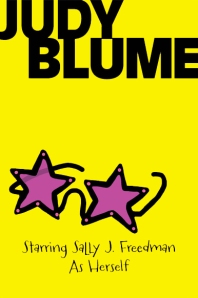 From Lauren: “As I refined those bits, Debbie was working away. She’d send in sketches, we’d review them, and throw them back to her with some notes for her to consider. As she started locking them down, it was time to add another pot on the fire and start in on character studies for the interior pages of the chapter books. Debbie created those and sent them over to us, and we reviewed them for accuracy to the text (age range, look of the characters, etc) and general cuteness 🙂 They came together quickly and then we took those to Ms. Blume, again for her approval. She loved them too and so we were ready to give Debbie the green light to sketch away.” 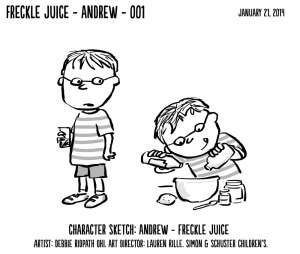 Because the deadline was tight, I had to start sketching before seeing the layout of the interior pages; I knew I’d need to adjust some of the sketches after the layout had been finalized.
From Lauren: “The tricky part with illustrated interiors is getting the page count correct; we knew we needed the books to be around a specific page count, and books only print in signatures of 16, so its the designer’s job to set the type in a size and style that is appropriate for young readers, designate size and placement for the illustrations, and to get the text to end at the right page number. After a lot of fussing, I was able to get the books to end on the right page, and had the right moments and space carved out for Debbie to illustrate.” 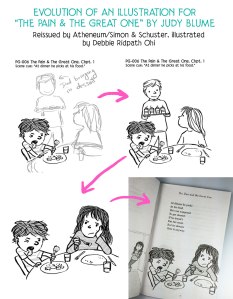 After I received the galleys from Lauren, there was a lot of back and forth, refining the illustrations to fit with the book and the design to fit with the illustrations. From Lauren: “Someone once said that good design should be invisible, and that’s what I aim for in the books I get to work on; I strive to showcase the artist’s work as best as possible, in a way that is most appropriate to the text, and most beneficial the reader. In the case of the Blumes, doing so was fast-paced, and challenging at times, but also fun and entirely rewarding.”
I loved working with Lauren Rille! Despite the tight deadline, we had a lot of fun throughout the process, especially since both of us are big fans of Ms. Blume and her work. 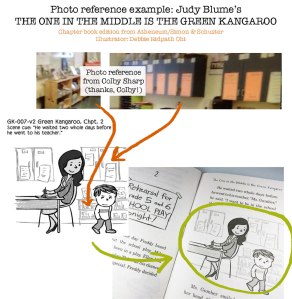 And thanks so much to Colby Sharp and Allison Durno for sharing classroom photos to help me get ideas for backgrounds in some of my illustrations.
VERY excited to see these books on the shelves. The middle grade books are out now, and the chapter books will be available on May 27th (paperback) and June 3rd (hardcover).

Like Loading...
← Reader? Teacher? Both. by Amanda Jaksetic Varian Johnson’s Code of Conduct (Or the rules of writing The Great Greene Heist) →