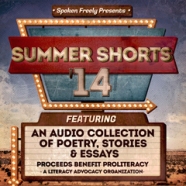 Last year, fellow audiobook narrator Xe Sands decided that for June Is Audiobook Month, she’d get together 30 narrators to narrate a public domain story, which would each be streamed for free for a day, and then made available for a small price, all proceeds of which would go to charity. Well, it was wildly successful and it’s back this year, with a bit of a twist: instead of seeking out public domain works, we would instead seek out the audio rights to works we enjoyed. So, I reached out to Tom Angleberger, and he immediately agreed and sent me an unpublished story of his, called “How Angelina Buglebrain Got Her Start.”

It’s amazing that I get to be the one to unveil this story to the world, and I hope you all enjoy it. Also, Tom and I got together this past week to film a book trailer for the story. Enjoy!

Nerdy Book Club is proud to be part of the Summer Shorts 14 blog hop – and especially thrilled to present “How Angelina Buglebrain Got Her Start” by Tom Angleberger, narrated by Mark Turetsky.  Enjoy the free streaming audio of this short story today – it won’t be available tomorrow! 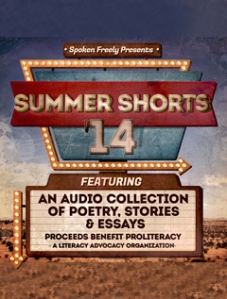 The audiobook community is giving back! Spoken Freely, a group of more than 40 professional narrators, has teamed with Going Public and Tantor Media to celebrate June is Audiobook Month (JIAM) by offering Summer Shorts ’14, an audio collection of poetry, short stories and essays. All proceeds from sales of the collection will go to ProLiteracy, a national literacy outreach and advocacy organization.

Throughout June 2014, 1-2 stories, poems and essays will be released online each day via Going Public, as well as on various author and book blogs. As a “Thank you!” to listeners, pieces will be available for free online listening on their day of release. As a bonus for those who purchase the full collection from Tantor Media in support of ProLiteracy, there are over 20 additional tracks only available via the compilation download.

You can see the full release schedule here, but be sure to check out the following free listening opportunities today and tomorrow:

Mark Turetsky is an award-winning audiobook narrator and voice over artist living in Brooklyn, New York. In addition to his audiobooks, Mark has voiced numerous commercials, video games, and online presentations. He is a graduate of New York University’s Tisch School of the Arts, and holds a minor in English and American Literature. Mark was an AudioFile Best Voice for 2010 and 2013.

Like Loading...
← Seeing People, Not Differences by Kay Honeyman Reading, My Lover; Theater, My Spouse by Michael Barakiva →