The Adventures of a Childhood Fueled by Books by Cathleen Daly

When I was a child I lived for books. I lived in books. I entered the stories therein completely and wholeheartedly.  You see, we didn’t have a television. My mom didn’t believe in TV.

Hmm… WHAT? How could you not believe in TV? In The Partridge Family? In H.R. Puff N’Stuff? The Courtship of Eddie’s Father? After all, Eddie was his father’s best friend, his one boy, cuddly toy, his up, his down, his pride and joy, and we were missing out!

This drove my sister and me crazy. We begged our mom repeatedly with much fervor and at extreme length, to please, please buy a TV already. She always said no. And I’m grateful to her, finally, now that I’m completely grown-up (or rumored to be grown-up), I have to admit, I’m really glad she held her ground. I ended up voraciously reading stories instead of sitting and passively watching them. Reading so much had tremendous benefits, many (most) of which I wasn’t aware of at the time. I think one of the best things was I grew very comfortable being alone. I don’t mean being a loner, I mean I took great solace in the company of a book, I enjoyed the company of a book as much as the company of most people, and reading as much as I did I developed a rich inner world that allowed me to be, for the most part, with or without a book, happy in my own company.

This active, dense inner world also fueled a font creative endeavors which were as odd as they varied. After reading all of Hans Christian Anderson and Grimm’s Fairytales (some of those Grimm’s tales were a little grim if I recall correctly) over and over, I  spent hours building fairy houses in the white sparkly rocks and exposed plant roots outside our floor length living room windows. I had a collection of tiny wicker furniture I’d set up in various appealing arrangements. I created beds with blankets made of rose petals and pillows that were perfectly smooth oval stones. What fairy could resist such an enticing bungalow? I’d lie on the shag carpet and stare out the window at a spot NEAR the fairy house, but never directly at it. I felt like the fairies were much more likely to come if I lent only a corner of my eye to their activities instead of my full gaze.

After reading the Chronicles of Narnia multiple times, my friend Ariane and I tried to enter Narnia in variety of adventurous, if slightly dangerous, ways. Once we climbed on the roof of my garage lugging a wooden carved sculpture of a ram. It was a smooth mahogany ram about the size of a football with sturdy  legs and curly-cue horns. We each grabbed a horn and, with intensity, hummed a song together under our breath, then at an agreed upon point in the hummed melody we jumped off the garage roof still holding the ram by the horns. Luckily our house was that low, ranch style architecture so the distance from the garage roof to the driveway wasn’t, apparently, bone-breaking distance.

When we read A Wrinkle In Time, Ariane and I tried to travel both backwards and forwards in time via bubble-gum cigarettes. Can you believe that they used to sell bubble-gum cigarettes to kids? Well they did and we puffed `em. They had a kind of white powder coating on the gum under the “cigarette” paper. We’d blow on one end and a little cloud of “smoke” would come out the other end. Well, we’d puff on them in a ritualized manner, peel off the paper, chew them, hold hands, twirl in a circle a set number of times, and then start to chant the year we wanted to arrive in. It never worked. Or maybe it did and Ariane and I are really from the mid 19th century. 1855 to be exact.

I read somewhere that Ray Bradbury said that writers should read, read, read as much as possible – this feeds the imagination to the point of bursting, that it’s likely to come spilling out on the page this way. This was certainly was true for me a child. I spent hours hanging out in the local library reading and writing. I wrote long stories in a red, blank journal, most of them were about a sort of Goth ballerina named Dorian, who was taciturn and gaunt (yet lovely), and, of course, orphaned. She struggled with many physical ailments but nothing could tear her away from her meteoric dancing career or her true love, a young ballerino named “Jeff.” (Guess who had a crush on a boy named Jeff in her downtown dance class?)  I wrote a script for television about three orphans (yes, more orphans) lost in a storm. I sent the handwritten script (very neatly handwritten, on binder paper) to ABC headquarters along with my school picture (wallet-sized) suggesting that I play the youngest sister in the story. I wrote and directed an experimental, tactile version of The Parent Trap that involved me getting raw eggs massaged into my scalp, it was performed on our back patio for a gaggle of very patient and kind neighbors. I wrote poems, songs lyrics, and  even a short monologue satirizing Julia Childs. Occasional spontaneous recitations were given at recess.

I got a TV as an adult and enjoyed it. A lot. Perhaps even more so for having been deprived of one as a kid. My TV broke though. On election night 2012 (I know, bad timing!) but I never fixed it or replaced it. I started painting again, something I hadn’t done since high-school. I started making sculpture-like paintings out of paper mache and paint. I was going through a difficult time and smushing stuff around with my hands, playing with shapes and colors, turns out to be very therapeutic. You know what I found even more therapeutic? Glitter. Mounds and globs of glitter. I bought a 12 pack of glitter. That wasn’t sufficient so I bought a 24 pack of glitter. I started loading my creations up with glitter thinking, “If I put glitter on this no café or gallery owner will ever hang it on their walls.”  I listened to that self-critical voice and then decided to ignore it. Ray Bradbury also said, “If you don’t love something, then don’t do it.” Well, I love putting gobs of glitter on things. 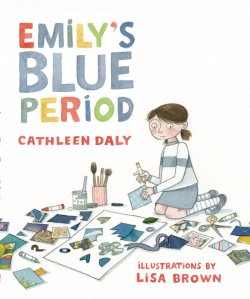 The slightly odd thing is this is a perfect case of life imitating art. My new book called Emily’s Blue Period is about a girl who’s having a difficult time because her parents are separating, making art gives her solace and helps her make sense of what she’s going through. When I wrote the book, I wasn’t making art at all or going through any particular difficulties. But the realm of the imagination is a vast and mysterious place, the book is a strangely accurate reflection of (and even guide for) my current circumstances… Maybe those candy cigarettes worked after all?! Whatever the case may be, my main hope for the book is that it give solace and inspiration to young readers who may or may not be going through difficulties of their own.

Cathleen Daly is a writer and performance artist who lives in the San Francisco Bay Area. She is the author of the novel Flirt Club, and the picture book Prudence Wants a Pet, both published by Roaring Brook Press. Emily’s Blue Period is her latest book.

Like Loading...
← Summer Reading – Ready or Not? by Tamara Sakuda The Meaning of Maggie by Megan Jean Sovern – Review by Linda Urban →