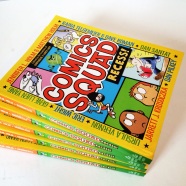 You know The Muppet Movie, right? The one where Kermit and Fozzie Bear travel the country, making friends along the way—bringing together the most memorable group in puppet entertainment history? That’s sort of what it’s been like working in kids’ comics over the last several years. A bunch of passionate artists from various corners of the country have come together to put on a show. But we cartoonists don’t have a stage; we have panels on the page.

I first met Jenni Holm while we were on book tour somewhere in the Midwest. Matt Holm and I met at the Texas Library Association conference when our publisher sat us at the same dinner table. As many people have been, I was introduced to Gene Yang at San Diego Comic Con. Dan Santat? I can’t remember exactly, but it was somewhere in L.A. and it involved food.  And to give you historical context in all of this, I first met Raina Telgemeier on MySpace. We have all met one another in various ways, but all of our initial meetings have had the same common thread— comradery and a great appreciation for one another’s work.

Over Twitter earlier this year, Jenni, Matt and I announced Comics Squad as if we were coming up with the idea for this new anthology in real time. Ironically, the initial germ for all of this did come over social media. After creating a short comic for an anthology that was prose-driven, I sent out a missive over Facebook that editors should invite me to more anthologies. As you see in this screen shot, Jenni had an interesting comment, and then we took the conversation offline with Matt. The three of us laid out our vision: a comics anthology with a very relatable theme for the elementary set. See that date in the screen shot? Comics Squad has been in the works for a while now. . . and we are SO pumped to finally unleash it into the wild!

Comics Squad is all about bringing together the creators of beloved kids’ comics. Jenni, Matt and I could not be prouder of the work that the team executed for this first book. Each contributor is such a rock star. (And can we geek out about Dav Pilkey for a moment?!) This is a book that we all wish that we had as kids. It’s also a book that we knew all of our educator friends could put to good use. There might be a Babymouse fan who reads Comics Squad and, after putting it down, might seek out a Dave Roman comic. Or visa versa! These stories don’t need to be read in order; you can bounce around however you’d like…now combine that with the alluring power of comics!  We cannot wait to hear what happens when this book is placed into the hands of the most reluctant of readers. 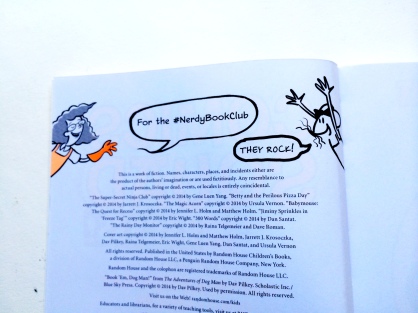 And that dedication? Well, that was an easy decision. None of us would be living out our childhood dreams if it weren’t for the passionate educators who champion comics as a valid form of reading. We have been honored to have had our works shelved in your libraries and classrooms. And we know that you have had to deal with the occasional Statler and Waldorf in all of this. Thank you for fighting the good fight, Nerdy Book Club.

Movin’ right along. We’re truly birds of a feather, we’re in this together… 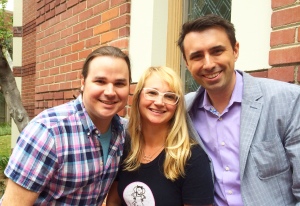 Jarrett J. Krosoczka has been passionate about storytelling through words and pictures since he was a kid.  Six months after graduation, Jarrett received his first contract for a trade book that he authored. Knopf Books for Young Readers published Good Night, Monkey Boy on June 12, 2001 and Jarrett hasn’t stopped or slowed down since. He currently has authored twenty one published books—ten picture books, ten graphic novels and his new chapter book—Platypus Police Squad: The Frog Who Croaked. His Lunch Lady series has twice won a Children’s Choice Book Award, in the Third to Fourth Grade Book of the Year category, and was nominated for a Will Eisner Comic Industry Award. Jarrett’s TED Talk, which chronicles his journey form boy to artist, has been viewed more than a half-million times. Both his Punk Farm and Lunch Lady series are in development as feature films. While Jarrett awaits seeing his work adapted for the silver screen, he can be heard on The Book Report with JJK, his radio segment on Sirius XM’s Kids Place Live. Jarrett is happily living out his childhood dream in Northampton, Massachusetts, where he resides with his wife and daughters and their pug, Ralph Macchio.

Like Loading...
← What Would Be in Your Book Box? by Janet Bass Rules of Summer by Shaun Tan – Review by Shawna Coppola →