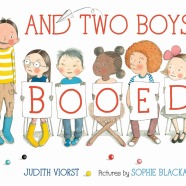 I spent a great deal of my childhood up a tree with a book. My brother was usually in the tree next door, also with a book. We had a brilliantly designed, poorly executed rope, pulley and basket system between trees to exchange books. (We were in our Famous Five period, and fortunately Enid Blyton was prolific enough to keep us fueled.) We only ever read paperback books in trees. For one thing, the book exchange was precarious, and many books went flying down to no man’s land between the branches. Also, my tree was a pink peppercorn and oozed sticky sap. Also, also, we didn’t always remember to bring our books down with us, and even though this was South Australia, it sometimes rained.

We read our hardcover books indoors. We never wrote our names in them, or folded down corners. We treated dust jackets with respect. What were the indoor books? Most of the set of Beatrix Potter. A few Dr. Seuss. Where the Wild Things Are. The Elephant and the Bad Baby. Books with pictures.

I loved both reading experiences. Curled up in an armchair on a rainy day, poring over the watercolors of Mr McGregor’s garden was probably when I first considered becoming an illustrator. Squishing a mosquito between pages 124 and 125 of Five Go to Smuggler’s Top was a permanent reminder of a good catch and a great Summer.

As an adult, I spend most of my waking hours talking about, writing about, thinking about and making picture books. I consider six different paper stocks with an art director. I beg an editor for an extra spread. For a bit of spot lamination. And, trying my luck, for embossing and die-cuts and a ribbon. But here’s my confession: I treat all my books as tree books*. I would do away with the dust jacket altogether. I like finding crumbs and messages in margins. I like reading a book which has been previously dog-eared, especially by someone I love. I have even torn a book in half to share with a fellow book-starved traveller (Great Expectations, on a train in China.)

The printed book is a tactile object. We connect with the story within its pages, and sometimes leave traces of our own stories behind. 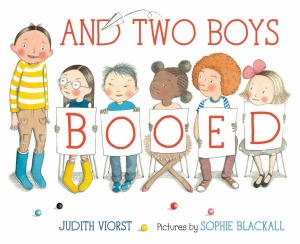 And Two Boys Booed is a picture book with paper flaps, which is as tactile as can be. I hope that kids will read Judith Viorst’s brilliant words, and want to lift those flaps, and wake the boy up and make the teacher clap her hands. And I hope they like doing it so much that the flaps fall right off and their calm and competent teacher/librarian/parent will mend it with tape, that the book will be battered and loved.

Here’s to making indoor books to be read in trees.

*I do respect library books, I promise.

Sophie Blackall is a Brooklyn based Australian artist. She has illustrated over twenty books for children, including Ruby’s Wish (Chronicle Books, 2003) which won the Ezra Jack Keats Award, Meet Wild Boars (Henry Holt, 2005) which won a BCCB Blue Ribbon Picture Book Award and the Founders Award from the Society of Illustrators, Big Red Lollipop (Viking, 2010) which was a New York Times Top Ten Picture Book for 2010, and the ongoing Ivy and Bean series (Chronicle Books), which has over a million copies in print. Visit her online at SophieBlackall.com.

Like Loading...
← Friend Request an Author by Margaret Simon THE SECRET SKY by Atia Abawi – Review by Jillian Heise →