El Deafo by Cece Bell – Review by Laura Given

Posted by CBethM on September 4, 2014 in New Book Reviews | 5 Comments

That was my alarm for September, which means that El Deafo is now available in stores!

This past January I was introduced to El Deafo by Cece Bell through a 50 page sampler.

Instantly I knew this book was something special (and it wasn’t just because it had a five in the illustrations (Why a five?). I have had my alarm set for September and El Deafo’s release ever since. 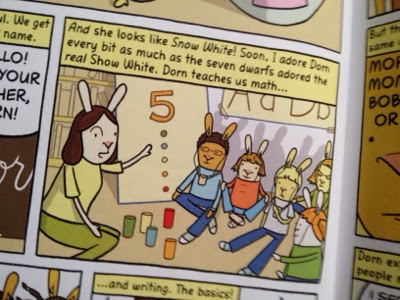 El Deafo is an amazing graphic novel memoir about author Cece Bell’s hearing loss at age 4 due to meningitis.

Her Phonic-Ear-super-hearing is her superpower! It is the superpower of El Deafo, Cece’s superhero name for herself.

El Deafo is a deeply personal and engaging memoir. The unique specifics of Cece’s own experience will intrigue and captivate readers.  While Cece’s story is uniquely hers, it is also one that young readers will most certainly identify with. And it’s the many connections readers will make to their own (perhaps universal) experiences that will grab hold and not let them go.

El Deafo is a story about feeling different.

It is a story about wanting a true friend.

It is a story about discovering someone isn’t quite who you thought they were.

It is a story about having a first crush.

It is a story about learning to like who you are.

…and it is a story about a young bunny who wears a Phonic Ear with an adorable little r.

Share this book with every reader, especially those who enjoy graphic novels like Smile by Raina Telgemeier or stories about kids ultimately embracing their differences as superpowers like Wonder by R J Palacio.

And pinkie swear that when you get your copy of El Deafo, you will read the “Note from the Author” at the end. Profound and wonderful, it is a great reminder that each of us is only ever an expert on our own experiences, and that it truly is our differences that are our superpowers.

Visit Cece Bell’s website for more about her and her books.

Laura Given is a K-8 Library Media Specialist. Her house in Minnesota is filled with stacks of books and her 5 collection. Find her online on twitter @LibLaura5 or at www.liblaura5.blogspot.com.

El Deafo is now out in stores, but this review was written before the release date based on a review copy from the publisher.

Like Loading...
← THE SECRET SKY by Atia Abawi – Review by Jillian Heise Have Books, Will Fish by Natalie Rogers →