Home » Reading Lives » “On a field sable, the letter A+ gules” by Jonathan R. Werner

“On a field sable, the letter A+ gules” by Jonathan R. Werner 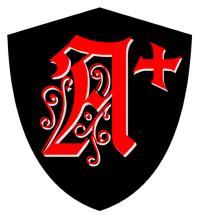 Think back to the day you met Hester Prynne.

Poor, forlorn Hester.  Knocking on countless unfriendly Salemites’ doors.  Rarely greeted with a smile.  Ever the subject of derision.  Seemingly lost in the shadow of her all-encompassing A.  It strikes me that Hester isn’t all that different from her novel when it has come to knock on classroom doors over the decades.  Unwelcome, rarely greeted with a smile, frequently the subject of derision, never seen for more than its beautifully wrought A.

But in the hands of Mrs. Kathleen Reilly, Hester and her world became among the most compelling literary landscapes of my teenage reading life.  Really?! I hear you balking.  Yes, really.  And if I can anticipate your next question: you were one of those kids, weren’t you?  By which you mean an incredibly avid, way above-grade level bookworm.  But, no.  I really didn’t think much of books or reading at all.  After Choose Your Own Adventure lost its luster for me, I only read what was assigned.  And none too enthusiastically at that.

Yet I grew to love Hester and her world because Mrs. Reilly loved her.  Adored her, spoke of her as she would a cherished sister, made it clear in every moment we interacted with the text that Hester was a fully formed flesh and blood person that Mrs. Reilly called her close friend.  “Wouldn’t you just DIE to have her over for tea?!” she once squealed.  I remember rolling my eyes outwardly.  But I also beamed on the inside in that involuntary way you do when you watch a dancer who loves to dance or hear a musician who loves to play.  I couldn’t help myself.  None of us could.

Until I became a Librarian a few years ago, I used to credit The Scarlet Letter with being the book that transformed me from a reluctant page turner to a voracious reader.  I called it my shovel, the first tool that broke the sod above what would become my English teacher turned Librarian’s literary garden.  Indeed the novel did provide me with my first opportunity to fully appreciate an author’s power to create character, his or her ability to manipulate me through plot, to dazzle me with language and, yes, with vocabulary.  At Hawthorne’s knee, I finally understood why words themselves matter.  Farthingale. Malefactress. Preternatural.  I ate them up, tasted their syllables, revelled in their subtleties.

But not because of Hawthorne.  Because of Mrs. Reilly.  Because how could I resist watching her take bite after bite of this delicious fare, the pleasure evident on her face, and refuse the helping she was offering us?  Clearly I would miss something spectacular if I didn’t take the proffered fork fulls of animadversion and contumely.

Put another way, I no longer credit Hester’s story, nor Hawthorne’s prose, but instead believe it was Mrs. Reilly’s transparent joy, her passion for the novel and for its heroine, that made my magic reading beans grow.  In all honesty, I’ve gone back to reread Hester’s tale several times and, like the fourth viewing of that favorite Mel Brooks’ film which was unbearably hilarious in your memory, The Scarlet Letter hasn’t completely held up for me as the work of genius I once believed it to be.

Certainly I am not naive enough to think there’s a foolproof recipe for creating passionate literature lovers nor that every effusive educator creates a room full of hungry readers.  But Mrs. Reilly augmented her contagious excitement with what were then cutting edge techniques that I still think of as potent ingredients in my own Raising Readers brew.

First, she never presumed she knew what would draw her students in.  Long before it was an accepted practice, she presented us with a buffet from which to choose.  Some required text, some small book groups, some independent titles.  If the book was required, as was The Scarlet Letter, she worked triple time to connect us to that text.  If we were in groups, she tweaked and fussed until every title was the right match for what she called her Superstars.  And, when she gave us the freedom to choose, she gave us Book Frenzies that would make Donalyn Miller smile had she walked in on one all those years ago.

Second, she emphasized the opportunities texts could provide us to step outside of ourselves.  She urged us to drink the Polyjuice Potion, to don the Cloak of Invisibility and explore worlds we could not otherwise inhabit.  It was far too easy in wealthy suburban New York to peer out through a single privileged lens.  So she had us try on every pair of literary shoes we could smash our feet into and then asked us to walk around in them for as long as we could.

Finally, and perhaps only slightly less potent than her passion, Mrs. Reilly honored our perspectives.  She heard our points of view.  And she listened.  I have absolutely no idea what I wrote about in my Scarlet Letter paper for her — though I wouldn’t be the least bit surprised if she still remembered today.  But what I can still see clearly in my mind’s eye is the A+ on top of the page, blazing like Hester’s ignominious embroidered token.  It felt to me as though Mrs. Reilly had extended a secret handshake, confirmed me as a member of a club I hadn’t even known existed: “Thank you for welcoming Hester to your table, for looking beyond her exterior, for delving deep and giving her a chance to grow on you.  Now let me introduce you to some of my other wonderful friends.”

It wasn’t the grade.  It was Mrs. Reilly’s honoring my effort, celebrating my willingness to engage, affirming that I was a scholar and a writer and — something I have treasured every day since I left her class that June twenty five years ago — a reader.  One worthy of her esteem.  And, perhaps, even of Hester’s.

Jonathan R. Werner is a Library & Instructional Technology Specialist (LITS) at the Library and Learning Commons in Cape Elizabeth, Maine.  After teaching English in Pennsylvania for several years post college, he made the CVE (Critical Vocational Error) of becoming a lawyer.  Once he awoke from that nightmare, he returned to teaching English when he and his family moved to Maine in 2005.  Though he will always be an English Teacher at heart, he is now the happiest LITS in America, spending his days sharing books and iPads with the fantastic teachers and students at Cape Elizabeth Middle School and High School.  You can learn more about his work on Twitter (@maineschooltech) where he is a co-organizer of #1to1techat, and where he regularly contributes to #edtechchat and #tlchat.

Like Loading...
← WHY WE DO: A Play in One Act by Adam F. Shaffer History Is Awesome by Ben Thompson →