By about fourth grade, many kids bypass the library’s picture book shelves and head straight for chapter books. This only makes sense, as they’re striving to grow up as quickly as possible as part of the headlong march toward puberty. At the same time teachers and parents encourage older elementary kids to read chapter books to increase their comprehension, vocabulary, and problem-solving skills. This is all as it should be, and only natural, except when picture books are thrown completely out the window. You might remember a New York Times article a few years back that lamented the loss of popularity, and consequently publication and sales, of picture books. Anecdotally, I fear this may be an inadvertent effect of the Common Core focus on non-fiction, technical texts. I’m already seeing teachers at my daughters’ school changing the routine check out of one picture book, one non-fiction title, and one chapter book, to three books of any combination except picture books.

Research bears out that picture books can be quite effective at introducing students through age 14 to themes or subject areas. Picture books offer a unique melding of visual and textual aspects unavailable in any other format outside of graphic novels. They encourage visual literacy, problem solving, teach children to make comparisons, and help develop writing skills.  The best picture books appeal to kids of many ages, don’t bore parents and teachers to death, and encourage kids to think at a deeper level.

I had the pleasure of sitting in the crowd when Bob Shea visited my neck of the woods via the Southwest Florida Reading Festival in 2013.  He presented the incomparably hilarious I’m A Shark through a retelling that included live drawing and plenty of audience participation. I remember being struck by the fact that the young kids to whom the book was marketed were not the only ones laughing their heads off. Older elementary and young middle schoolers were also engaged, along with absolutely all of the parents in the audience. Shea mentioned that he’d honed his craft as a writer for Comedy Central before diving into creating children’s books. The benefits of this experience couldn’t have been more evident than they were as I guffawed along under that tent two winters ago. 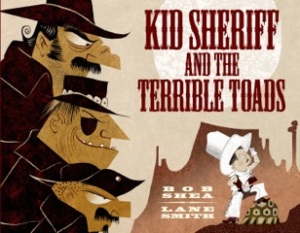 About a month ago I brought home Kid Sheriff and the Terrible Toads, the second picture book in which Shea joins forces with award-winning picture book artist Lane Smith. Kid Sheriff is just about a perfect picture book when it comes to working on the multiple levels I’ve described above. Besides all that serious stuff, it may be one of the funniest picture books ever. In my house, Bark George has long held that trophy, but I think Shea and Lane may have finally given Jules Feiffer a run for his money.

Kid Sheriff and the Terrible Toads pays homage to all the cheesy western movies you may have enjoyed as a kid. You must first put on your worst John Wayne accent when reading it aloud. Then introduce your audience to a small boy gussied up like Buffalo Bill himself. Said youngster rides into town slowly (“give him a minute”) on the back of not a horse, but a tortoise. He’s come to rescue the wild west from a band of ne’er-do-wells known as the Terrible Toads and announces his intention to serve as the new town sheriff. The baffled (adult) mayor asks:

“Can you handle a shooting iron?”

“Stay up past eight?”

“Well then, what makes you a sheriff?”

“I know a really lot about dinosaurs.”

“Pleased to meet you, Sheriff.”

Herein lies the reason that kids of all ages can enjoy Kid Sheriff: Shea and Lane have crafted a thoroughly post-modern romp of a throwback. There are several levels to this story that older elementary and younger middle school kids will enjoy being privy to. It’s always fun, after all, to have a one up on a story’s characters. In Kid Sheriff, readers are the only ones wise to the fact that dinosaurs maybe aren’t responsible for all the chaos troubling the town of Drywater Gulch.  Readers witness Kid Sheriff, the lone child of the story, not only trick the adult Terrible Toads into confessing their dastardly deeds, but get them to willingly walk into jail, where Kid promptly locks the door behind them. Mayor McMuffin and several other adult caricatures never catch on to the way in which Kid uses his extreme knowledge of dinosaurs (and we all know at least one real-life six-year-old paleontologist) to capture the wily criminals. Readers are left unsure if Kid Sheriff really believes dinosaurs are responsible for the pandemonium, or if he’s just that much cleverer than all the adults he rescues from terror. The possible spin-off classroom conversations on point of view, omniscient narrators, and slapstick comedy are endless, to name a few.

As a children’s librarian, I love to push the envelope with older elementary readers, especially the ones who think they’re getting a little too cool for school.  A Blazing Saddles redux for the G-rated set, Kid Sheriff and the Terrible Toads is not just hilariously fun to read aloud, but demonstrates storytelling of a complexity necessary to be enjoyed by older kids. This makes it perfect for older kids who may be a teensy-bit rusty on picture book enjoyment.

Lane Smith’s spot-on sardonic illustrations heighten the comedy; readers will enjoy Kid’s extremely serious demeanor, as well as the baffled and slightly stupid expressions worn by the accompanying adults on both sides of the law. My own three kids range in age from six to twelve, and our shared affinity for Kid Sheriff (along with a maxed-out version of my husband’s honestly-earned Kentucky accent), have made him a household name. (Our collective favorite line: “Why I smooched them beefy lips my own self!”) I can’t wait to see the look on my kindergarten son’s face when a copy of Kid Sheriff appears under the tree on Christmas morning with chaps, a Stetson, and cowboy boots alongside. I’m looking forward to his older sisters snickering along as they do their own read-aloud impressions of the Dry Gulch denizens.

Rebecca Jones is a children’s librarian and mother of three. She blogs about all things books at http://abooklongenough.com.