Home » Author Posts » The Power of the Crayon by Sarah Albee 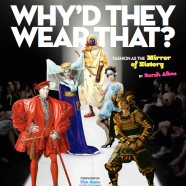 The Power of the Crayon by Sarah Albee

I remember the moment when I decided to become a writer.

I was seven. Back then, there were only three channels on television, and the only decent kid programs were Saturday morning cartoons and Sunday evening’s Wonderful World of Disney. The rest of the time, you had to watch whatever the other people in your family wanted to watch. Especially if, like me, you were the youngest in a large family.

So there I was, sitting on the floor drawing on an enormous pad with my red crayon, as my parents watched a boring documentary about the British Royal Family. I drew a picture of Queen Elizabeth and the rest of her family. And after the show was over, I asked my mom to help me send it to the Queen. I wrote her a cover letter (also on enormous paper). We addressed a large envelope to Queen Elizabeth, Buckingham Palace, London England, and sent it off.

My older brothers told me she’d never receive it, let alone write back. Because, they pointed out, the British have been mad at us ever since the Boston tea party. Every letter that shows up from America, they said, is simply tossed into the sea.

“She will too read it,” I retorted, but uncertainty began to creep in.

And then, two weeks later, I got a reply. Here it is. 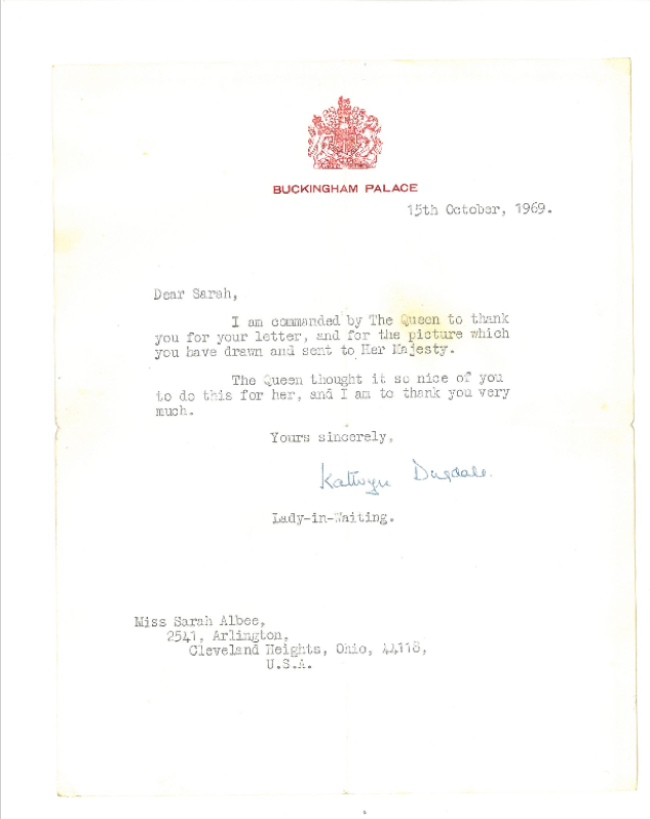 In case you can’t make out the faded writing, I’ll tell you what it says:

I am commanded by The Queen to thank you for your letter, and for the picture which you have drawn and sent to Her Majesty.

The Queen thought it so nice of you to do this for her, and I am to thank you very much.

Can you imagine? I was a seven year old girl. With my red crayon, I got a queen to write to me. That was the moment I realized the power of my crayon.

And that was the moment that I resolved to become a writer—because I realized then that writing gives you power. I started writing letters to everyone. The president. Television actors. And most often of all . . . my favorite authors.

And they all wrote back. I got a letter from Beverly Cleary. (Sadly, it has been lost.) I’d written to her because my older brother had insisted that Henry Huggins should be pronounced “Henry Huge-ins.” (He was just messing with me, but I didn’t realize it.) She wrote back with a handwritten, autographed picture that said,

Thank you for writing. It is pronounced ‘HUG-gins,’ so your brother is wrong and loses the bet.

My older sister began writing letters, too. Here’s one she got from Roald Dahl: 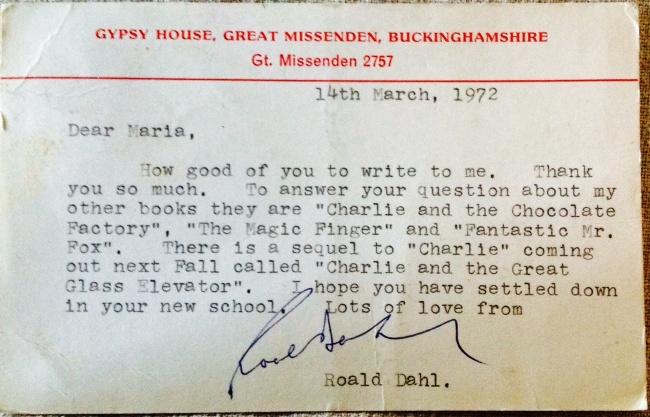 Now that I have become an author myself, I’m amazed to find kids writing to me. Recently, a twelve-year-old girl wrote me a sweet letter. When I wrote her back, I made the mistake of thanking her for the cool, sparkly card. She sent me a follow-up letter on an even more sparkly card. 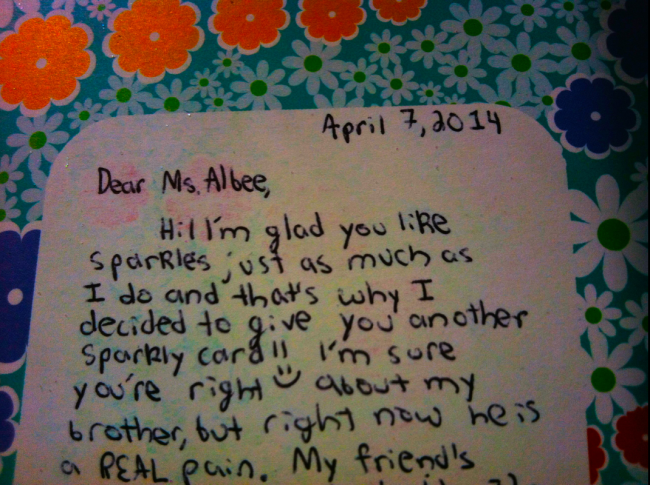 I was finding sparkles for days after, on my keyboard, in my coffee, on the dog.

Like many of my fellow authors, I’ve gotten semi-panicked emails from kids writing reports and asking me to answer their homework questions (“URGENT: Please respond ASAP” is usually a reliable indicator). Or I’ll get a batch of thank-you letters from a thoughtful teacher who had her whole class write me after a school visit. And I do thank heaven for Twitter, which allows for quick acknowledgements.

But the letters I treasure are the heartfelt ones, the ones that appear to have been sent by a kid unprompted, unassigned. I still find it hard to believe that I have grown up to become an author that kids write to, but it makes me grateful every day for what I do.

Sarah Albee writes mostly middle-grade, nonfiction history. Her latest book, WHY’D THEY WEAR THAT? (National Geographic) releases today. Her recent titles include BUGGED: HOW INSECTS CHANGED HISTORY (Walker/Bloomsbury), and POOP HAPPENED: A HISTORY OF THE WORLD FROM THE BOTTOM UP (Walker/Bloomsbury). Sarah blogs about offbeat history at www.sarahalbeebooks.com, is a contributor to the Interesting Nonfiction for Kids “Nonfiction Minute” (http://www.nonfictionminute.com), and loves to visit schools. Follow her on Twitter @SarahAlbee,

Like Loading...
← A Book Diet: Try It! by Sandy Otto Feeding a Love of Reading by Cory Putman Oakes →