Home » Author Posts » Two Authors, One Voice for the Voiceless by Kirby Larson and Mary Nethery 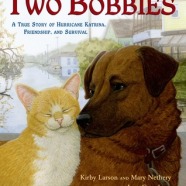 Two Authors, One Voice for the Voiceless by Kirby Larson and Mary Nethery

Hurricane Katrina has been called the largest and most devastating natural disaster in the history of our country. Ten years ago this week we watched in deep sadness as our fellow Americans suffered great losses.

But out of horrific experiences come opportunities for giving and receiving love. As author Tory McClure, (A Pearl In the Storm) wrote, “Love is what makes our humanity bearable.”

After Hurricane Katrina hit, thousands of volunteers put their unconditional love and friendship on display as they poured into the Gulf Coast; their numbers included Kirby who flew first to Pearlington, Mississippi, and then Houma, Louisiana, to help with clean-up and rebuilding.

But, as we discovered, love, friendship, and loyalty are not reserved for the human species. Two tender pets — Bobbi, a five-month-old puppy and Bob Cat, just out of kittenhood — managed to survive Hurricane Katrina by lending each other a paw.  In doing so, they have become timeless ambassadors for “goodness,” not only for children but adults as well, inspiring us all to be better than we ever thought we could be.

Bobbi and Bob Cat immediately after being reunited at the shelter

Two Bobbies: A True Story of Hurricane Katrina, Friendship and Survival (illustrated by Jean Cassels; Walker Books for Young Readers) our first book together. It cemented the core of our collaborative work: writing narrative non-fiction stories about interspecies friendships.

Prior to Two Bobbies, we’d searched for months for a story that would launch our collaboration, one that would strike a chord in each of us. After all those months of searching, we never could have imagined that a hurricane would bring us to the heart and soul of what we wanted to write about. That universal essence we’d been searching for jelled immediately: Love is the most powerful force in the universe.

And we were the fortunate authors who had humbly been brought to the job of speaking for the voiceless; in this case authentically telling the story of Bobbi and Bob Cat’s journey, the decisions they made to support one another, and the unconditional love that finally brought them to safety.

As we know, the devil is in the details, which meant exhaustive interviewing and research on our parts. But we are bit players. What Bobbi and Bob Cat did is the source of their inspiration and the power of their influence on our readers’ lives.  Their story impacted us personally in a dramatic way.  We realized that being a friend is not peripheral to life, but rather one of the primary reasons we are here.

Yes, Two Bobbies, with over 70,000 books in print to date, has won the ASPCA Henry Bergh Award and the Southern Booksellers Award, and 13 state Children’s Choice awards. But we had no full or deep understanding of the magnitude of their lives or their journey until we started hearing from our readers. We’d like to share a few of those responses with you.

A dance instructor, Jenn Eisenberg, used Two Bobbies with nearly 700 students in NY and Hoboken, NJ, struggling in the aftermath of Hurricane Sandy. (The lesson can be found at www.jenneisenberg.com.)

“When my seven-year-old daughter kept telling me about Two Bobbies, I didn’t think it would stand out more than any other children’s book I’ve read . . . She wouldn’t let it go . . . So, I bought it for her birthday. I was about halfway through when the author revealed a surprise about one of the animals. I felt a sudden lump in my throat. Are you kidding me … I’m going to get choked up over a children’s book? It was by far one of the most memorable children’s books I’ve ever read. Two Bobbies taught me something about reading to my children. It’s OK to share a real-life story with them. They don’t always need glass slippers and happily ever afters . . . It’s about time they heard a remarkable, true story – a story of the bond of friendship in the toughest of times.”

This adult reader appreciated the healing kindness of the two Bobbies:

“I wanted to write and thank you for your wonderful book. My wife bought it as a Christmas present for our niece. When my beloved pet dog, Bear, passed away unexpectedly earlier this week, my wife handed me your book and asked me to read it. I was so touched by the story, and by the kindness that those two showed to each other. Your book has helped me greatly through my grief over my pet’s death. I never thought that I—a 30-year-old man—would find so much comfort and joy in a children’s book..”

Another email testified to the healing power of the Bobs’ story of unconditional love:

“I’m still crying, the story touched me so. I was born in New Orleans and raised in Waveland, Mississippi.  You may know that Waveland was completely destroyed in Katrina. My parents and two brothers completely lost their homes.  Of course, the greatest losses were friends, neighbors: my mother died shortly afterwards as much of a broken heart as her illness. I’ve heard so many stories of survival but none as touching as this one. These stories of survival help us heal the loss and lessens the grief a bit.”

Most importantly, Bobbi and Bob Cat have managed to inspire young readers to develop empathy, compassion and a sense of service. One of the earliest responses to the book was from a young girl who was so moved by the story, she convinced her family to adopt a Katrina pet. We’ve heard from schools that have held penny drives to buy dog and cat food for local shelters, and those that have raised money for the ASPCA. Two young girls in Colorado decided they would make a difference by volunteering at their local shelter and saving their allowances to donate $100 to that shelter. And one young reader convinced her family to take a working “vacation” at the Best Friends Animal Society sanctuary in Utah to do volunteer work there.

And this powerful message comes  from Juwell, an eighth grader who was displaced by the hurricane: “I love your book. It really gave me comfort and some healing. You inspired me to go up and beyond my limits to start helping dogs and people in need.”

It continues to be a privilege for us to be a voice for the voiceless; their magnificent stories of love must be told. Thank you, Bobbi and Bob Cat, on this tenth anniversary of Hurricane Katrina, for creating out of chaos and despair an opportunity to display goodness and love.

When Kirby Larson is not writing nonfiction picture books with her pal Mary Nethery, she is lost in the world of historical fiction. Her books have earned the Newbery Honor (Hattie Big Sky) and the Scott O’Dell Award for Historical Fiction (Dash). She is grateful that Mary puts up with her seat of the pants writing style.

Mary Nethery is the New York Times, USA Today and Publisher’s Weekly bestselling author of many picture books for children, as well as books for readers of all ages.

In addition to Two Bobbies, she has collaborated with her dear friend Kirby Larson on Nubs: The True Story of a Mutt, a Marine and a Miracle, recipient of the Christopher award, and 15 state Young Readers Choice Awards.

Mary lives in Santa Fe, New Mexico. Her latest picture book, illustrated by John Manders, is The Famous Nini: A Mostly True Story of How a Plain White Cat Became a Star.