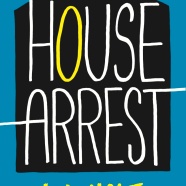 Whirlwinds and Riptides by K.A. Holt

Sometimes, bad things happen. It’s not your fault, and it’s not something you can control. These whirlwinds and riptides grab hold of you and so you grab hold back, trying to keep air in your lungs as you are whipped along.

Bad things happen when you’re young and old. They happen when you’re rich and poor. They happen to girls and boys. There is not one person alive on this earth who hasn’t experienced a bad thing. This should give you comfort, and yet, when the bad thing has you in its grip you feel like you’re all alone. You feel as though no one in the world could possibly understand the pain and terror you are experiencing. You are the only star in the universe, and a black hole has you, and what do you do? What can you do?

This is why I wrote House Arrest. I wrote it as an offering to every child who feels alone because of a bad thing. And I wrote it as a salve for my own bad things. I also wrote it as a way to think about gray areas. Right and wrong is really hammered home when you’re a kid, but what about those times when a wrong makes a right? When a right is really wrong? How do we navigate the gray areas? How far do you go to battle the bad things?

When my youngest son was born, he was very sick. He was born three months early and weighed only two pounds. After a long stay in neonatal intensive care, he was big enough to come home. We thought he was healthy, but it turns out he wasn’t. Like Levi in House Arrest, my son had a condition called subglottic stenosis. It is very rare, and it means that your trachea is so narrow barely any air can get through. My son was five months old when he caught his first cold and stopped breathing completely. In the hospital they put a hole in his neck so he could breath, and we were told this would be his life. Our world was filled with hospitals and doctors and eventually, nurses and medical equipment in the house. I became proficient in changing tracheostomy tubes and performing CPR. My other children found themselves on an incredibly steep learning curve about what it’s like to have a medically fragile sibling. No friends over to play, very few family outings (and never all together), surgical masks when you’re sick, dealing with strange nurses in the house at all hours. It was an incredibly difficult time. Life and death were present every hour of every day. Our days were spent reacting. Surviving.

When my son was two years old, we traveled from Texas to Ohio to see a world-renowned surgeon. We were able to do this because of the generosity of family and strangers (and because of a Medicaid waiver for very sick children). It was one of the most difficult things I have done as a mother, admitting that our family needed help. It was even harder to accept that help. Just like Timothy says in House Arrest, you don’t want to be the family whose faces are on the change jars in the grocery store. But here’s the thing: accepting help does not mean you are admitting defeat. That’s a very complicated concept for an adult to grapple with, and I know it’s difficult for children as well. That’s another reason why this book exists. It’s okay to ask for help. It’s okay to allow people to lift you from the trenches.

My son’s trachea was completely reconstructed using one of his ribs as a graft. He’s seven now and is a typical Minecraft-obsessed second grader. You can’t even see the scar where the tube used to be in his neck. He doesn’t have many memories of those difficult years, but the rest of the family does. I knew, for my own sanity, I needed a way to work through everything. I needed a way to grab onto the bad thing and make it a good thing, or at least make it a thing that might help other people. House Arrest came from this need to get the upper hand.

It may sound like this book is autobiographical, but really it’s just informed by real life. House Arrest is most definitely a work of fiction, but it is born from emotions shared across age, gender, and socio-economic status. You might not be a young boy, and you might not have a sibling with a life-threatening affliction, but you know how it feels when it seems like the world is sitting on your shoulders. You know the gut-punch of wishing desperately for something to happen, and not always getting your wish.

Timothy is your guide through these feelings. He is your permission slip to be angry and confused. He is the Sherpa, holding your hand up an insurmountable mountain, showing you that while it’s tough going there are moments when it can possibly, maybe be fun. Timothy is that feeling we all have when the only thing you can do is laugh, because your other option is to try not to feel at all. Timothy is the part of you that doesn’t accept no for an answer – at any cost.

Timothy’s story and my story are not the same. But his story is a story I wish I’d had when the bad things were happening. It’s a story I wish I could have read to my children. It’s a story that I hope will be the kind of thing that starts a discussion in a classroom, and also leaves a comet trail of hope and solidarity in the heart of the kid who needs it the most.

Of all the books I’ve written, House Arrest was by far the most difficult. But in difficulty comes understanding, and eventually relief, and maybe even peace. I hope the readers of this book will feel less alone; will feel more able to muse over right and wrong; and will find a little bit of themselves in Timothy. Timothy is a little bit of all of us, I think. He’s the id of the cornered soul, fighting its way against the whirlwinds and riptides, showing us that even when things are not okay, there is always room for hope.

K.A. Holt is the author of several books for young people, including the new middle grade verse novel House Arrest, and Rhyme Schemer, a Bank Street Best Book of 2014 and an Amazon Best Book for Kids and Teens. She lives in Austin, TX and eats a lot of tacos.

Like Loading...
← Top Ten Fictional Places in Literature by Isabelle Sudron A Reading Life: Making Our Literacy Traditions Explicit to the Children We Teach by Dorothy Suskind →