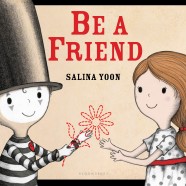 What it Means to BE A FRIEND by Salina Yoon 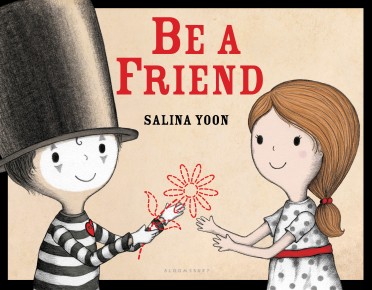 I was an ordinary Korean child. 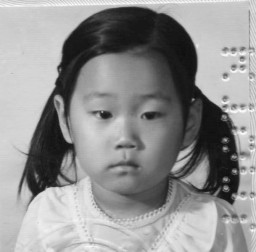 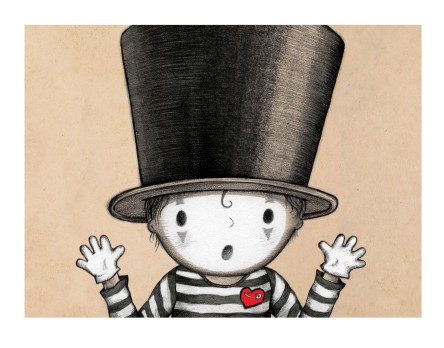 In America, my new home, I felt anything but ordinary. Kindergarten was scary. I didn’t speak English or know American culture. I didn’t even know how to make a friend.

He would only ACT — in scenes.

I felt foreign, different, and out of place. I also had to get used to my new given American name, “Salina Yoon,” to take the place of my Korean birth name, “Yoon Ah.” My parents hoped that the new name would help me blend in and better assimilate.

Everyone called him Mime Boy. 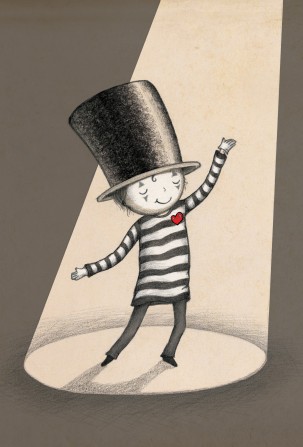 I couldn’t understand my teacher or my classmates.

It was as if he were standing on the other side of a WALL. 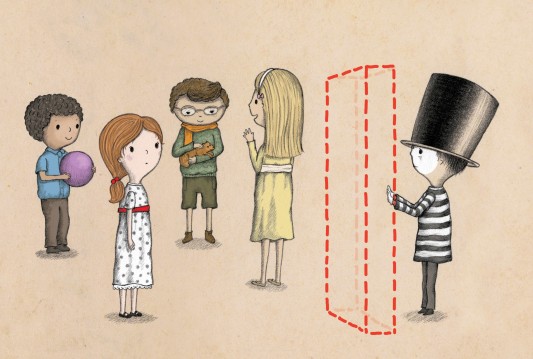 I had come from Busan, Korea just one year before I started school. I learned what I could from watching Sesame Street and Romper Room on television. But since my parents couldn’t read, write, or speak English, it was difficult to learn. I was surrounded by a classroom full of kids, but I felt alone and stayed silent.

People just assumed I was shy.

Even trees get LONELY sometimes.

Until one day, I met a friend. And this changed my life.

In first grade, I met a friend named Dorothy.

She was Korean just like me! And she spoke English and Korean. Turns out I wasn’t shy after all, because I loved talking with her in Korean and broken English. In fact, I even got a note sent to my parents because I was talking TOO MUCH! I made jokes, laughed out loud, ran, and played in the playground. It meant everything to have a friend.

BE A FRIEND is a story about a boy named Dennis who’s life is silent because he is a mime, but lonely because he’s not understood. Until one day, he makes a friend who does.

It was not my intention to write a story about my experience as a child, but as this story developed, it was clear to me how much I identified with the main character. And it also occurred to me how many other people of all ages would identify with his personal struggle with connecting with the world.

But this story isn’t only about Dennis. This story is about Joy, the young girl that reaches out to Dennis in just the right way to make the friendship that ultimately changes his world, and hers.

While adults today are busy making new virtual friends by the dozens or even hundreds through social media, young children are still making new friends the old fashioned way, one child at a time, one on one—in their classrooms or the playground. Joy demonstrates this in a gentle and sensitive way.

My hope for this book is to encourage readers (both children and adults) to embrace their uniqueness no matter how different they feel, and to keep their heads up. If your head is down, you might never see the friend that’s reaching out.

Look up. And be a friend. 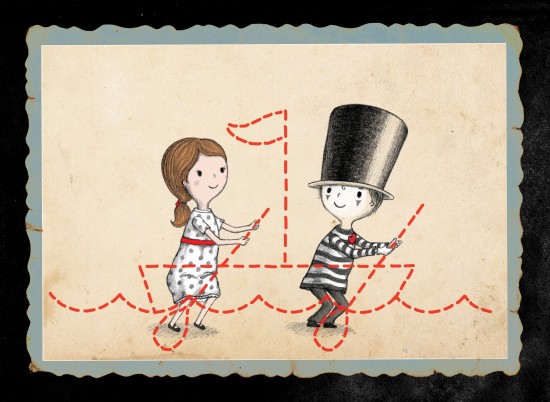 Salina Yoon has written/illustrated more than 100 books for children. Her latest, BE A FRIEND, celebrates its book birthday today. You can find her online at www.salinayoon.com and on Twitter as @SalinaYoon.

Like Loading...
← But I Do Read: Lessons in Pop Culture from a Teenage Girl by Colleen Pennell iLoveMG by Trevor Ingerson →