Home » Author Posts » “You Should Write Something for Us”: A Full Circle of Inspiration by Kristen Kittscher

“You Should Write Something for Us”: A Full Circle of Inspiration by Kristen Kittscher

At the National Council of Teacher of English conference dinner this past year, other authors and I were asked to share a story about an educator who made a difference in our lives. The heartwarming, and often hilarious stories poured out, one after the other: there was the librarian who shared the a book that inspired a lifelong love of reading; the teacher who offered the perfect words of encouragement at the right time; the coach who saw something in us that no one had yet noticed.

It was, in microcosm, evidence of the way teachers inspire kids everyday, everywhere, whether they grow up to be authors or engineers.

I couldn’t have been the only one who had to secretly dab the corner of my eyes with my napkin by the end of the sharing.

I had my own story, of course. When I was six, one of two American kids at a Catholic school near London, Sister Christina whisked into my life with her blazing smile, ruddy cheeks, and her twice weekly classes in “Creative English.” She gave us little notebooks that we decorated ourselves and prompts that had us imagining ourselves as fall leaves and majestic birds. I fell in love with storytelling. It helped that Sister Christina praised my story about Tiddles the Elephant as if it were a literary masterpiece. Tiddles, who was kidnapped and forced to be in the circus, but who found a best friend in Clarence the Camel (mystery, intrigue, and friendship stories have never been far from my heart!). “This is superb!” said Sister Christina, beaming, and I never really wanted to do anything else again.

Sadly, though, I moved away soon after that – and moved again, and again—every two years growing up—and while I had many great teachers and always loved storytelling, I lost confidence and grew shyer and silent. I come from a family of practical business people. I would never have dared to say out loud I wanted to spend my life reading and writing stories. That wouldn’t do. That wouldn’t make money. That couldn’t possibly bring “success.” I might as well have declared I wanted to be a rock star. I kept my stories to myself. 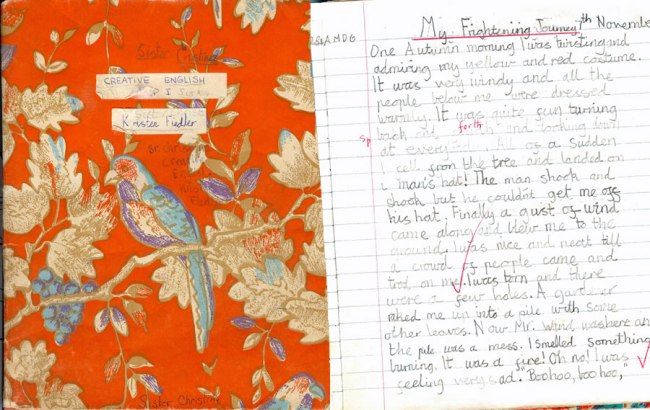 But something marvelous happened later in life. I became a seventh grade English teacher. It was then that I discovered a secret. Teachers are not the only ones who do the inspiring.

Sure, maybe I did a little inspiring here and there. But my students repaid my small efforts a thousandfold. They rushed into class with books I just had to read. They pressed their stories into my hands and asked for advice. They begged me for more and more book recommendations, prompting me to read until I was staying up till 1 a.m. nights to even begin to keep up.

Best of all, they inspired me to write. After all, I had to walk the walk, I told myself. The first time I mustered the courage to share a little of a quick freewrite we’d done together at the start of class, my students fell silent. I’d done it, I thought. They knew it now: their English teacher was a fraud!

Finally, someone broke the silence. It was Annie Thorne—Annie Thorne, who has since graduated from law school and is getting married in a couple months—but whose words at twelve I’ll never forget. “Whoa,” she said. “You should, like, really write. You should write something for us.”

It’d be years before I took Annie Thorne’s advice. But her words would echo in my head like a refrain until I finally did. You should write something for us.

It’s truly thanks to my students—even more than Sister Christina—that I have become an author. They picked up where my own teachers left off and inspired me with their own encouragement and passion. It wasn’t until I imagined telling a story for them that I was able to find my voice.

Thanks to them, too, I understand the bridges we build to books aren’t filled with one-way traffic. Nor do they slope downwards from on high. Kids and adults together create a marvelous (and nerdy) tangle of interconnections that multiplies the booklove, if only we’re open to receiving it.

KRISTEN KITTSCHER is the author of bestselling tween mystery The Wig in the Window (Harper Children’s, 2013) which garnered a starred review from School Library Journal and was named to ten Best of the Year lists. The 2014 James Thurber House Children’s Writer-in-Residence and a graduate of Brown University, Kristen is a frequent presenter at schools, libraries, and festivals. She lives with her husband in Pasadena, home of the Rose Parade—the inspiration for her latest novel, The Tiara on the Terrace. Visit kristenkittscher.com or follow her on Facebook and Twitter (@kkittscher).

Like Loading...
← Top 10 (or so) Chapter Books for Transitioning Readers by Arika Dickens Myself on the Shelf by Robb Pearlman →