Imagining a World Without Books by Kimberly Adkins 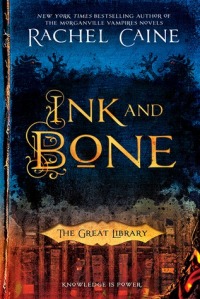 Yesterday, my daughter had a friend over for lunch.  They couldn’t sit at our kitchen table to eat because it was covered with books…  books that I had bought, books that I had checked out of the library, books that I had brought home from school.  I often look at the piles of books situated randomly throughout my house and realize that I could have traveled to Europe with the money spent on books.  I can’t help it –I love the way they feel in my hands, the way they smell when they are brand new, and the promise of time spent in an imaginary space.  Every time the credit card bill arrives, my spouse desperately begs me to turn off the One-Click setting on my Amazon account.  I can’t imagine a world in which I would not be allowed to own a book.  That, however, is the world created by Rachel Caine in her newest novel, Ink and Bone, the first in The Great Library series.

The Great Library of Alexandria controls the access and distribution of all knowledge.  Daughter libraries exist in all the major cities of the world.  If granted access to the text of a book, the words are transferred by alchemists locked in the Iron Tower in Alexandria to blank books that each person owns.  The words disappear as they are read.  No one may own an original book.  The price of stealing or smuggling books from the library is death.

Jess Brightwell has been trained by his father to be a runner.  Runners deliver black market original books to collectors or to the perverted ink-lickers.  While Jess’ father is only concerned about the monetary value of books, he teaches Jess to respect them.   Jess comes to love the feel and smell of the books he holds in his hands and he begins to steal away for hours at a time to read the precious originals his father owns.

When Jess is tested and earns a spot as a postulant in the Great Library, his father rejoices to have a spy within the Library.  But all is not as it seems.  The Library holds its power by force and rebels called “Burners” fight to bring down the system.  When Jess and his fellow postulants are sent to rescue a treasure trove of books found in the besieged library of Oxford, he quickly learns that, to the Great Library, books are considered infinitely more precious than any life…including his own.

Ms. Caine has created a credible steam-punk world.  Steam carriages, automatons, and trains that move hundreds of miles an hour, lend an air of fantasy, while the depictions of war, sadly, are all too familiar.   The characters are well-fleshed out and the plot twists, breath-taking.  I’m anxiously awaiting the next book in the series to discover how Jess will survive the Machiavellian machinations of the Artifex Magnus.

When I began reading this book, I thought that it might simply be a reimagining of Bradbury’s masterful invective denouncing censorship, Fahrenheit 451. Nothing could be further from the truth.   In an age when libraries and librarians are threatened with budget cuts and extinction, to imagine a world in which the library is all powerful can be somewhat heartening.  But the maxim that absolute power corrupts absolutely is true in this case.  Jess’ world, a world in which the role of the library is self-serving at best, evil, at worst, becomes an object lesson in the misuse of knowledge.  This is a world in which the great storehouses of humanity’s collected wisdom have been turned into instruments of torture and death.  This book should lend itself to heated discussion in book groups or in classrooms.  There is much food here for thought.

Kimberly Adkins has been a librarian for 18 years.  She has so many books in her house that the an AT&T repairman thought she was trying to start a library.  She believes absolutely in the power of reading and cannot imaging a life where books are not spilling over every flat surface.  Her daughter recently bought her a shirt that says, “Librarian only because Book Wizard is not an official job title.”  That about says it all.  You can find her practicing her wizardry at C.E. Byrd High School in Shreveport, Louisiana.  READ!

Like Loading...
← A Tyranny of Petticoats: The Beginnings of an Anthology by Jessica Spotswood Drum Dream Girl by Margarita Engle – Reviewed by Katie Priske →