A Forest full of Memories by Jessica Walton

There are some picture books that survived my childhood love, my carefree abuse of their precious pages. What are a few signs of wear and tear between friends? The slightly damaged spines and the loose page stitching seem now to be proof of quality, enjoyment, history, a connection, a relationship. A book has no purpose if it’s not being read, and I read them nearly to death. I held on to them both for myself and for my future children.

One of the joys of becoming a parent has been moving my treasured picture books from my bookshelf to my toddler’s, but I couldn’t help worrying just a little. Would they get damaged further? Maybe even destroyed? Would I regret this? I very briefly entertained the idea of waiting until Errol was older, so I could explain their worth, explain that they held dear memories and were more than the words and pictures that were printed on them… but the magic of these books is that I knew them from the very beginning when my parents first read to me, and I read them over and over until they became a part of me, my identity, my way of seeing the world. The thing that made them precious to me was the same thing that compelled me to let him at them from a young age. And so I did. Hopefully they survive his childhood love too, and can continue to be passed on.

With certain books, you’re passing on more than a treasured object; some books communicate messages that are valuable and relevant for more than one generation. Where the Forest Meets the Sea by Jeannie Baker (1987) is one of these. The story opens with a child travelling by boat (which happens to be called ‘Time Machine’) with his father to a stretch of beach next to a tropical rainforest. Thanks to the author’s note we know that this place is the Daintree Rainforest in North Queensland, Australia. The book explores, through the eyes of a child, what the rainforest and beach might have been like a hundred million years ago, what they’re like now, and what they could be in the future if the area is overdeveloped and commercialized for the purposes of tourism.

I vividly remember the first time I read this book as a child. Baker’s illustrations are exquisitely beautiful works of art; her magical collage rainforest landscapes still take my breath away. There was something about the final page of that book, the translucent image of hotels and four wheel drives and human rubbish overlaying the pristine beach, river and forest, that stimulated my imagination. It woke me up in some way; I had genuinely never thought about what the place I lived in was really like before houses and roads and shops were built, what the places I went on holiday were like before they became tourist hotspots, and what Australia might have been like before it was invaded. 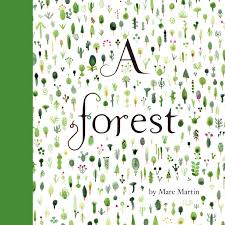 A recent addition to my son’s bookshelf, A Forest by Melbourne artist Marc Martin, has become one of his firm favourites. It shares the same message as Where the Forest Meets the Sea, exploring the consequences of destruction of the natural environment by human beings to inspire a desire for conservation. However, while Where the Forest Meets the Sea gently warns that nature will lose if human greed is not held in check, A Forest shows the complete obliteration of the forest and the nasty consequences of that loss for humankind.

This story begins with a forest that has grown thick and lush over thousands of years. As humans cut the trees down, they start out by replanting them. Overcome by greed, they eventually stop replanting and cut trees down with ever increasing speed. When all the trees are gone, they build a city. Losing the trees doesn’t work out too well for the humans, and I’ll be honest: it’s kind of nice to see the forest get revenge and stage a comeback.

I really bought this book for myself, because of the environmental message and the beautiful texta-and-watercolour illustrations, but now that my son loves it, it has become his. It may seem like a sophisticated message for a two-year-old, but Errol is currently interested in counting the many trees in the forest at the beginning of the book, and shouting gleefully ONE TREE when the forest begins to grow again. In my mind, this book is linked permanently with Where the Forest Meets the Sea, and the way that that book helped shape my early views on environmental issues. I can only hope that Errol will grow up to treasure both of these books about forests, his mama’s and his own, because his generation and the ones to come will face difficult and potentially catastrophic environmental challenges made worse by the inaction of those who came before them.

Perhaps Where the Forest Meets the Sea and A Forest will become a small part of my family’s story, our conscience, our relationship with the environment. I like the idea that one day, my son’s children might read them and feel the same awakening that I did as a child, all those years ago.

Jessica Walton lives with her wife, son, and cats in Melbourne, Australia. She was inspired to write Introducing Teddy after her father transitioned into the woman she had always been on the inside, and Jess wanted to find a way to tell that story to her young son. A former secondary teacher, Jess is passionate about literature, board games, the ukulele, and funky prosthetic legs (her current one features green dragon scales). Introducing Teddy is her first book.

Like Loading...
← Passing the Baton by Maria Canela The Right Tool for the Job by Kate Roberts and Maggie Beattie Roberts →