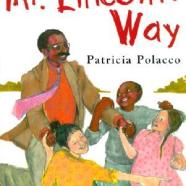 The Great Ways of Mr. Lincoln by Kioka Tuck

You were born with the power to change others. You change people by the way you treat them.  That is what changes the human heart.

The first time I was introduced to Patricia Polacco’s work I was enrolled in a Reading Literacy Class in college.  I became a fan of her works for young readers very quickly.  Polacco always chooses to talk about diverse stories that should be brought to classrooms everywhere.  She is able to face tough issues through children’s book.  She has tackled bullying, racism, learning disabilities, and much more.  One of my favorites is Mr. Lincoln’s Way. The book tells the story about an elementary principal named Mr. Lincoln.  He was loved by all of his students except for Eugene Esterhause.  The students at the school gave him the nickname “Mean Eugene” because he was a bully. Eugene used racist words to mark students that he came in contact with on a daily basis. Eugene’s life at home caused him to be full of hatred.  His father taught him to torment anyone that was different from him at school.  Eugene was dismissed by so many teachers because he always showed a negative behavior.

Sometimes we meet so many children like Eugene and we destroy them with our own words.  Mr. Lincoln believed that Eugene was just a product of his environment and was taught to hate.  He makes it his mission to help Eugene become a great student.  He did not focus on Eugene’s negative behavior and what others said about him.  He discovered that Eugene had a love for birds and misses his grandfather.  After making this discovery, Mr. Lincoln realizes that Eugene knows a lot about birds. Also, he founds out that Eugene learned about nature and birds from his grandfather.  He gives him a project to help birds come to an atrium that is built within the school. Mr. Lincoln illuminates Eugene’s passion and helps him learn compassion.

As an educator, I have taught children like Eugene.  It can be hard when there is so many odds stacked against them.  A child’s brain is like a sponge and the learning is just like different types of liquid.  The liquid can be bad liquid or good liquid.  Mr. Lincoln decided to be good liquid for Eugene and made the greatest change.  Mr.  Lincoln demonstrated patience and acceptance without hesitation.  Mr. Lincoln taught him pass the academics and the structure within the school system.  He taught Eugene through his love of birds that the beauty is in the difference of the individual.  He encouraged “Mean Eugene” to be “Great Eugene.”  Hopefully, there are more  teachers like Mr. Lincoln working at elementary, middle, and high schools everywhere.

Kioka Tuck is from Rockford, Alabama, and is currently a Lead Pre-K Teacher.  She loves teaching diversity and social skills through literature for children and young adults.  Her blog is called Miss T’s Book Room.  Follow her blog at www.askmskt.blogspot.com.

Like Loading...
← Sailing Oceans of Story by Padma Venkatraman 5 Picture Books That Have Influenced My Teaching of Social Justice Issues by Vanessa Capaldo →