Home » New Book Reviews » Where Were You? Nine, Ten, A September 11 Story by Nora Raleigh Baskin – Review by Patrick Andrus 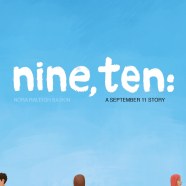 Where Were You? Nine, Ten, A September 11 Story by Nora Raleigh Baskin – Review by Patrick Andrus

Where were you on March, 30, 1981?  I was home sick spending the day with my mom.  This was the day President Reagan was shot.

Where were you on January 28, 1986?  I was a senior in high school eating lunch.  This was the day that the Space Shuttle Challenger exploded.

Where were you on January 17, 1991?  I had just finished student teaching and was beginning to look for a teaching job.  This was the day that Operation Desert Storm began.

Where were you on June 17, 1994?  I had just finished an evening bike ride when I turned on the television and saw OJ Simpson in a white Bronco on a Los Angeles freeway.

Where were you on August 31, 1997?  I was home recovering from a summer of surgeries and chemotherapy.  When I woke up that morning I learned that Princess Diana was killed in a car accident in Paris.

If you are old enough to remember Tuesday, September 11, 2001, you know exactly where you were and what you were doing when you heard the news.  I was in my car driving to work listening to my favorite radio when the DJ started talking about an incident in New York City.  The day that followed was one of the most surreal days in my teaching career and my life for that matter.  After what seemed liked a never-ending day, I arrived home to take my wife and two young children into my arms.  I also remember laying in bed that night to silence; it was so quiet because there was no air traffic. 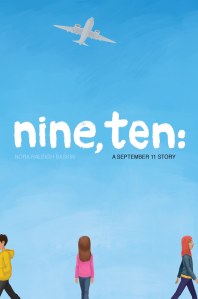 Flash Forward to the summer of 2016.  I was lucky enough to be on the receiving end of a copy of Nora Raleigh Baskin’s newest novel.  This was a book that I had been looking forward to reading for quite some time.  I couldn’t wait to get started.

What followed was an afternoon of reading one of the most special and powerful stories I’ve ever experienced.  Nora created a uniquely different fictional tale of four children living their lives in the days just before our country’s largest terrorist attack.

Meet Aimee.  She is a middle-school student living in California.  Aimee has just started a new school and is trying to fit in.  She is missing her mother who is away on a business trip.  Her mother has actually traveled to New York City for her meeting.

Meet Sergio:  He is also a middle-school boy who lives in Brooklyn New York.  Sergio lives with a loving grandmother who took him in after his father disappeared.  While navigating his way through the city, Sergio meets a New York City fire fighter and forms a special relationship with him.

Meet Nadira:  She is a Muslim living in Columbus, Ohio.  Nadira has always embraced her heritage, but as she tries to fit into middle-school, she is torn between her culture and being one of the “American’ girls.  This doesn’t prove to be as easy as she wishes.

Meet Will:  He is our fourth middle-school character living in Pennsylvania.  Life for Will and his family hasn’t been easy since an accident that killed his father.  He is trying to figure out why the accident had to occur and leave his family “fatherless.”

Nora creates an emotional two-day journey that follows these four children has they live their independent lives leading up to one of the most horrific days our country has ever experienced.  Their four stories are told separately focusing on their family and school life.  Each of them is dealing with their own issues and learning to not only accept themselves, but also the people around them.

When I saw the cover and title of the novel, I thought the book would concentrate on the actual events of 9/11.  I was worried that it would be hard to read about this historical event and how it affected these young people.  Surprisingly, the focus was on the characters living their lives and dealing with their own stuff.  Each of them is “tied” to terrorist attack in their own way.

The reader gets an inside look at their lives and becomes a part of the story as it slowly builds toward Tuesday, September 11, 2001.  We read about their morning of 9/11 and what each of them finds themselves doing as the country learns of its fate.

A year later; Will, Sergio, Aimee, and Nadira all travel to the Memorial Service marking the one-year anniversary.  Each of them is there for their own reason, but in the end maybe they are really there for the exact same reason.

As I think back on this reading experience, I remember the afternoon sitting with the novel meeting the four children and having their stories sink their way into my heart.  The writing is incredible, beautiful, and poignant.  As a white man living in the United States, I truly only know my own story and what I remember about that day.  This story opened my mind and my heart to four perspectives each unique to the terrorist attack.

When I finished the novel I began to think about ways I could use the story with my fourth grade students.  It is an important book and one that needs to be handled with care, thought, and heart.  I can picture the heart-felt discussions that could be had while sharing the book with my students.

There are so many historical events that I remember from my childhood, my teen years and of course being an adult.  As difficult and heart-breaking as these events are, I’ve learned that if I look at them with open eyes and an open heart, in the end I’m a better person for it.  Stories, novels, and writings can also help us deal with life-altering events.  This is one such book that did that for me.

Epilogue:  I had the honor of interviewing Nora Raleigh Baskin after reading her novel.  Here is a link to that interview:

Patrick Andrus is a fourth grade teacher in Eden Prairie, MN.  His number one goal for his students is to create an internal passion for reading and books.  He makes it a daily habit of visiting the Nerdy Book Club Site.  Patrick is beyond thrilled to have this be his seventh post on the site.   You can find his own blog by visiting http://readwonder.blogspot.com.  He is also an active member on Twitter and his screen name is patrickontwit.  Patrick will be attending his first NerdCampMI this July 2016.

Like Loading...
← Top Ten Children’s Books about Presidents and Politics by Rachel Ruiz STOP! Collaborate and listen! by Robin Mellom and Lindsey Leavitt →