As a middle school librarian, I see a multitude of readers both eager and reluctant every day in my library.  The female heroines in this book represent a collection of independent and strong-willed characters that demonstrate resilience and persistence that we want our students to emulate.

Sophia Bellamy is not your average debutante in the Commonwealth and the notorious Red Rook is attempting to rescue prisoners from the dystopian Sunken City (formerly known as Paris).  When a marriage contract is arranged with a wealthy man Rene, Sophia knows she has to agree to save her family’s business.  However, her new fiance has a hidden past and only the mysterious Red Rook can rescue her brother, when evil politicians arrest him for being the Red Rook.  These seem like two opposite storylines, but Sharon Cameron skillfully weaves them together with action and romance reminiscent of classics like The Scarlet Pimpernel and The Three Musketeers.

North of Beautiful by Justina Chen

Terra is a beautiful teenager who’s determined to escape her verbally abusive father by applying to colleges far away. She has a port wine stain on her face that has always been something she felt she had to apologize for or make up the difference by having a good figure.  Then she meets Jacob and a series of events unfold that bring her out of her comfort zone and into the paths to her future.  A journey together allows Terra to map her own dreams and Jacob shows her what real love means.  Luminous, beautiful writing that empowers young women to celebrate their inner beauty in why Terra is a fierce heroine!!

The Lie Tree by Frances Hardinge

This book is a thumping good mystery that I could not put down! Faith’s father is dead and she’s the only one who suspects he was murdered for his connection to a mysterious mythical tree. Her father believed there was a legendary tree that is fed on lies and that would give the owner the ability to see the truth. Set in Victorian England, Faith is a dynamic heroine and she is clever in how she recognizes the ways she breaks the stereotypical Victorian model for females. She wants to be a scientist and has no desire to get married like society suggests. Her intrepid strategies discover the motives and the machinations in the search for the tree.

The Girl in the Blue Coat by Monica Hesse

This novel tells the story of World War II through the viewpoint of a young woman who has lost the love of her life but finds her calling in helping save the lives of others. In 1943, Hanneke is a Dutch citizen who works for the black market in Amsterdam to support her family during the war. She is heartbroken over losing her boyfriend, who was a soldier in the Dutch army, and died fighting the Nazis. One day her customer asks for help in finding a missing Jewish girl, who was in hiding.  Hanneke begins to work for the Dutch Resistance and discovers her inner strength in fighting to defend her beliefs and her country.  I enjoyed the story of the Dutch Resistance and it was fascinating to imagine the everyday people who showed courage in fighting the Nazis.

Liddi Jantzen is an heiress to the tech empire on her galaxy. When her brothers are kidnapped by an evil employee of her parent’s company, Liddi must utilize her scientific skills to journey to another planet to save them. This retelling of Hans Christian Andersen’s THE WILD SWANS, transports the reader to a universe where bravery is proven in saving the people you love.

Do you enjoy adventures stories and mysteries that keep you guessing? Kekla Magoon’s Shadows of Sherwood–A Robin Hoodlum Adventure will entrance the reader with the question of what has happened with Robin’s parents when the evil Crown stages a takeover to control the government of Nott City. This sci-fi retelling of the classic Robin Hood myth is filled with quirky characters and amazing inventions. Robin is a strong heroine, who is searching for her missing parents and also trying to help the poor people she meets along the way. I found the action and mystery the best parts of this novel because you really want to know if her parents are alive and what the mysterious messages they left behind mean. 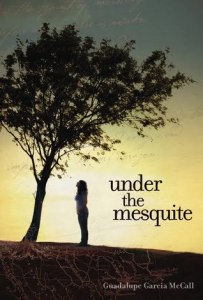 Under the Mesquite by Guadalupe Garcia McCall

During her senior year of high school, Lupita is filled with hopes and dreams for her future.  She will be the first in her family to attend college and she loves drama class, hanging out with friends and writing in her journal.  When her Mami discovers she has cancer, Lupita takes on even more responsibility of taking care of her siblings.  The mesquite tree in their yard becomes a symbol for Lupita’s courage.  This lyrical novel-in-verse is a poignant tribute to Ms. McCall’s own mother whom she lost when she was a young girl. 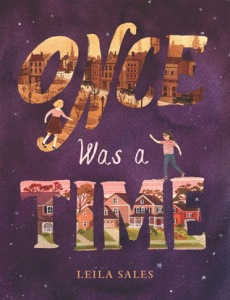 Once Was a Time by Leila Sales

If guy time traveled to save your best friend’s life and ended up years apart, would you ever give up on finding her? This is the story of Lottie and Kitty, who become separated by sixty years and several countries. The mystery begins of whether they will ever find each other again. In World War II, ten year old Lottie is transported by time travel to present day Wisconsin, where she must find her way back to her family and her best friend, Kitty.

Sisters, ghosts and adventurous discoveries take place in Raina Telegemeier’s latest graphic novel.  The bond between Catrina and her younger sister, Maya, are the nexus of this story.   Their family has moved to Northern California for the better weather to aid Maya’s illness and the sisters explore their new hometown.   Also, the poignant fear about Maya’s illness (cystic fibrosis) is the reason she is curious about ghosts and the fear of her own mortality. The sisters discover a neighbor and he invites them to find what ghosts could live in the Bahía de la Luna.  Catrina’s and Maya’s relationship is a powerful driving force and their bond is  Inventive and suspenseful storytelling (without the frightening ghouls) make this the ideal middle grade ghost story. 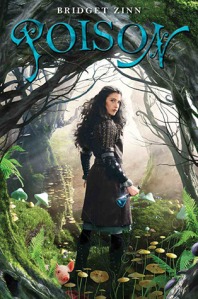 Poison by Bridget Zinn is a stand alone book that will make you laugh and cheer! Kyra is a potion master and she’s convinced she has to kill her best friend, Princess Ariana, to save the kingdom. Until she meets a magic sniffing pig, a handsome traveler and a few creepy creatures that help her determine the real quest. Kyra must believe in her potion skills and find a way to save the kingdom before she is captured or turned into a witch’s dinner. This read has lovely magical adventures as Kyra must save the kingdom!

Megan P. Fink is a middle school librarian at Charlotte Country Day School. She began her career in children’s book publishing, but fell in love with libraries while working for the New York Public Library. She is an active member of YALSA and has served on YALSA’s Award for Excellence in Nonfiction for Young Adults, Teen Read Week and Best Books for Young Adults committees.  Megan has written for VOYA, YALS and BOOKLINKS magazines and she has written TEEN SERVICES 101 (2015)  with the American Library Association http://www.alastore.ala.org/detail.aspx?ID=11341