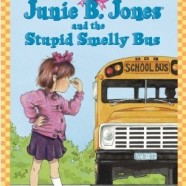 “Nitwit!” I hear my daughter yell, and instinctively I look up. We are on the beach in sunny San Diego, and she is screaming at a little boy who looks about 5 or 6 years old. I rush over to ask what the problem is, and my daughter angrily shouts and points at this kid, who is poking a jellyfish with a stick. I try to smooth things over and remind her that asking nicely is more likely to get the kind of response she wants. I wonder where she’s picked up the word “nitwit” anyway — What is this, the 1950s? Who calls someone a nitwit ? And then it hits me — Junie B. Jones.

My daughter has always loved characters who misbehave. David Shannon’s David books mesmerized her at an early age–she could recite No, David! while turning the pages at age two. She enjoyed all of the Berenstain Bears books, but most of all when Brother and Sister Bear were getting the gimmies or calling names. The Junie B. Jones books were the first chapter book series we read together, and I have to admit that at first I was skeptical. The incorrect grammar, the weird, made-up words, and the frequent use of the word “stupid” made me cringe. But my daughter loved those books! Like so many millions of other fans of Barbara Park’s writing, she connected with the quirky, sassy Junie B. We spent countless evenings curled up together before bedtime giggling about her antics. It was a bittersweet day last spring when we finished up the 28th and final book in the series. (Finally, we were finished! But what next?)

As spring turned to summer, we dove into Katherine Applegate’s short and sweet Roscoe Riley Rules series next. With a predictable format and a main character who always begins each book in time out, it was the perfect follow-up to Junie B.

My daughter had to have her tonsils removed mid-summer, and Roald Dahl distracted her during the worst of the pain that accompanied the healing process. We began with Charlie and the Chocolate Factory, and she delighted in hearing about Augustus Gloop, Veruca Salt, Mike Teavee, and Violet Beauregarde (and Charlie Bucket too, of course…but maybe not quite as much as the others.)  We followed that with George’s Marvelous Medicine, which she wanted to read all in one sitting. (A kid makes his “old hag” of a grandmother disappear with a magic potion…Just what the doctor ordered!) We rounded out our foray into Roald Dahl’s books with The Magic Finger and The Twits. She was ready for a break from his writing, and in a flash of inspiration I thought of one of my childhood favorites: Ramona Quimby. Why hadn’t I thought of her sooner? She was the original Junie B.

To my delight, my daughter embraced the Ramona books as enthusiastically as I had as a child. We began them during a time of great joy, when I was expecting a baby last summer, but it was not to be. I miscarried in mid-August. We continued reading about Beezus and Ramona throughout the late summer and early fall. I will be forever grateful to Beverly Cleary, whose passages about Susan and her boing-boing curls reminded me that I would find laughter again.

My daughter insisted on Captain Underpants next. George, Harold, Principal Krupp, Professor Poopypants, and the Wicked Wedgie Woman sent us into gales of giggles. Ivy and Bean, that pair of second-grade schemers, came next. We breezed through all 10 books in the series quickly, and we’ve circled back around to Beverly Cleary. We’re currently reading the Henry Huggins books now. He’s a much better behaved main character than Ramona, but she appreciates the cameo appearances Ramona and her sister make throughout the books.

Sometimes I wonder about my daughter’s taste in books. Why can’t she be one of those kids who are fascinated by Jack and Annie and their Magic Treehouse? (She tells me she’s tried them, and declares them to be boring.) She knows what she likes, and for whatever reason, it involves characters who don’t follow the rules. I will support her reading interests as best I can as she continues to grow as a reader, and there is one thing I’m looking forward to in just a few years: introducing her to Harriet the Spy.

Kirsten LeClerc is a teacher-librarian in Asheville, NC.  She is on Twitter @kirleclerc and blogs occasionally at http://bookswithcharacter.blogspot.com.

Like Loading...
← So Many Books, So Little Time: Tips for Reading Strategically by Donalyn Miller The Power of Art by Renée Watson →