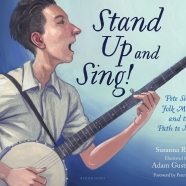 A cat may have nine lives, but a children’s book author can have more. With each book, I  live an entirely new life. This is true when I write fiction, and perhaps even more so when I write biography. I become completely immersed, like an actor inhabiting a role.

As a novelist, I conjure an imaginary world and play the part of each invented character. As a biographer, I’m a sleuth who steps into the shoes of my subject, channeling their personality and experiences into words and, when the book is published, giving presentations, readings and performances that reflect and amplify the text.

Here are a few of the lives I’ve lived.

While writing Painting the Wild Frontier: The Art and Adventures of George Catlin, I became an art historian and traveled the Great Plains and the jungles of Brazil at Catlin’s side.

With José! Born to Dance, my job title was dance historian, and I felt in my bones the challenges José faced as an immigrant child and his physical elation when he discovered dance.

Working on Minette’s Feast: The Delicious Story of Julia Child and Her Cat, I cooked French recipes and rejoiced with Julia’s cat, Minette, when she was given Julia’s leftovers. After the book came out, I was invited to do a presentation on the ALA cooking stage and lived the life of a chef. This involved learning to chop and stir and talk at the same time, which, believe me, is no easy task. Sandwiched between appearances by celebrity cookbook authors, I held up Julia’s favorite cat toy—a Brussels sprout tied to a string—and demonstrated how to make cold cucumber soup. It was the most delicious book I ever wrote.

In the past few years I’ve been writing books about musicians: Stand Up and Sing! Pete Seeger, Folk Music and the Path to Justice; Fab Four Friends: The Boys Who Became the Beatles; and a work-in-progress about the Gershwin brothers, George and Ira. My brain has become filled with Beatles songs, folk tunes, musical theater refrains. I hum all day long and sing in my sleep. I’ve discovered there’s no such thing as too much music. 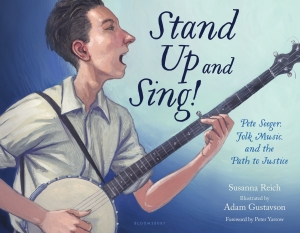 Stand Up and Sing! just came out, and I’ve been living a new life as a folksinger, leading sing-alongs at book signings. It’s something I’ve never done before, and each time it’s a thrill when people sing with me as I pound out the rhythm with my feet.

When I was an aspiring writer, I didn’t know I’d have so many lives, or that becoming an author meant becoming a public figure. I didn’t realize I’d be asked to speak about my books, read them in front of an audience, meet and mingle with readers, much less do cooking demonstrations and lead sing-alongs. I’d never heard of school visits, ALA or BEA. I thought writers just sat at their desks and wrote, and that suited me just fine.

I’ve always been shy. People who know me are sometimes surprised to hear this, because I’m friendly and sociable. But speaking in public didn’t come naturally to me the way writing did. It took many years for me to become comfortable with it.

I grew up in a musical household, and my natural inclination was to sing and dance. As a toddler, my neighbor’s rotating pink ballerina figurine put me into a trance of desire. In elementary school, my love of books was second only to my love of the stage. I eventually became a professional dancer, retiring at the ripe old age of 30, then worked for 10 years as a floral designer. Note that neither dancing nor flower arranging required me to talk, though I did have to learn how to present and sell design ideas to customers.

After nearly forty years of doing other things, I finally felt I had something to write about. At the beginning I had only a vague idea what it was. After a few books, it became clear: I wanted to write about the arts and the lives of artists.

Now that I’ve published eight books and lived eight lives, I’ve almost caught up with my cat. With more book projects on the horizon, I hope to eventually surpass her. There’s still a part of me that’s shy, that feels a sense of relief when a public presentation is over and I can crawl back to my desk and shut the door. But I wouldn’t trade being a children’s book author, and my many lives, for anything.

Susanna Reich is the award-winning author of both fiction and nonfiction books that have received many starred reviews and honors, such as Four Fab Friends: The Boys Who Became the Beatles and Minette’s Feast: The Delicious Story of Julia Child and Her Cat. She lives in Ossining, NY, with her husband, children’s book author, Gary Golio.  Visit her at www.susannareich.com.

Like Loading...
← Make New Friends, but Keep the Old by Michelle Blanchard Ardillo The Power of Representation by Ellen Oh →