​Celebrate the Weird Stuff in Life by Tammi Sauer

For me, the hardest part about writing a picture book is coming up with an idea. I’m not talking about a regular idea. Nope. I’m talking about a good idea. A fresh idea. An irresistible-to-readers idea.

Each year, I present at lots of schools and conferences. One thing I like to tell people is to celebrate the weird stuff in life. The weird stuff is good material for stories.

Many of my books have gotten their start from a weird moment in my life. Some resulted from a moment of surprise. Others from a moment of annoyance. One was even triggered by my Great Aunt Florence. My job is to pay attention to those instances, find the funny in them, and use them as starting points for real deal stories. The idea for my latest book, Caring for Your Lion, illustrated by Troy Cummings and published by Sterling Children’s Books, began with one such moment.

Mason was undeterred. He suddenly became a debate champion.

The next thing I knew, the two of us were standing in PetSmart and eyeballing aquariums bursting with small furry mammals. Mason was filled with elation. I was filled with dread.

Then I noticed something. Next to the aquariums packed with hamsters, gerbils, guinea pigs, and mice was a rack of Pet Care Guides. I picked up one of those brochures and skimmed over the details. Hmm…. 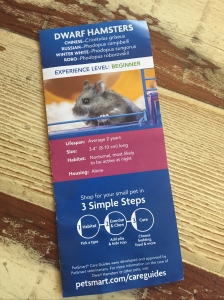 Now I was filled with elation.

I had a good idea!

Right away, I knew the first few lines.

Congratulations on your new lion. We know you ordered a kitten, but we ran out of those. Luckily, a lion is practically the same thing! Caring for you lion is easy. Just follow this handy guide.

Before long, Ralph was settled into his new home.

And my idea? It triggered a first draft that led to a second draft which eventually led to an eighth draft. 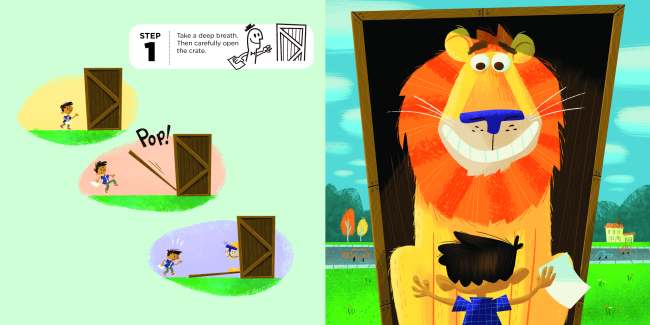 Mason and I were caught up in our separate tracks of joy. Joy, I tell you!

As the weeks went by, however, Mason’s enthusiasm for his new roommate waned. Ralph required a lot of time and energy. Ralph was nocturnal. Ralph was stinky.

While at a school visit, I mentioned Mason’s plight to the librarian. It turned out this wonderful lady want-want-wanted a dwarf hamster for her library. My hero! Mason donated Ralph to the cause, and Ralph ended up spending the rest of his days happily living it up with 650 elementary school kids in Moore, Oklahoma.

Even though Mason has been hamster-less for quite a while, he does have something else. He now has a certain book dedicated to him.

Tammi Sauer is a full time children’s book author who also presents at schools and conferences across the nation. She has sold 29 picture books to major publishing houses including Disney*Hyperion, HarperCollins, Houghton Mifflin Harcourt, Penguin Random House, Simon & Schuster, and Sterling. In addition to winning awards, Tammi’s books have gone on to do great things. Chicken Dance was made into a musical and it is currently on a national tour, Nugget & Fang was a featured book at the 2015 Scholastic Book Fair, and Your Alien, an NPR Best Book of the Year, was recently released in Italian, Spanish, Korean, and French – which makes her feel extra fancy. Tammi and her family live with one dog, two geckos, and a tank full of random fish (but no dwarf hamsters or lions) in Edmond, OK. Visit her online at www.tammisauer.com and on Twitter at @SauerTammi.

Like Loading...
← Classics, Colonization and a Call for Change by Padma Venkatraman The Book Love Foundation Summer Book Club by Penny Kittle →