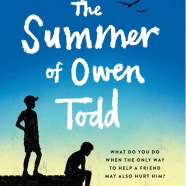 THE SUMMER OF OWEN TODD by Tony Abbott

Books come to their writers in different ways. You see a painting, overhear a conversation, stare at the sky, close your eyes, and suddenly—or not—there is a voice, speaking.

The Summer of Owen Todd, due out in the Fall of 2017 from Farrar Straus Giroux Books for Young Readers, came to me from a story told to my wife from a friend. Her son had been sexually abused beginning when he was eight. As he grew older, the memories of that violation did not fade, his sense of shame and anger mounted, and he eventually killed himself, still a young man barely out of his teens. One particular part of the story was that when the abuse was happening, the boy told his friend, but swore him to secrecy, and his friend never told. The mother wanted her son’s story out there, and since she knew I was a writer, she wondered if I knew anyone who might take it on.

I did know other writers. But even in those first few days after hearing the story and discussing it with my wife, moments—not even ideas and certainly not scenes—but moments in the arc of the story began to surface. I think any man, even if he has never been abused as a child, as I was not, knows something about the strangeness of an older man touching him. That certainly happened to me, as it must to nearly all boys. I wondered, of course, if it was even possible to tell the story with a character as young as eight, in other words, as a lower-middle-grade novel.

To form a story from actual truth was something I already knew—from my novels Firegirl and Lunch-Box Dream, both of which began as personal memories—would be fraught with questions and challenges, the chiefest of which was that real life incidents are either too oppressive or too slight to give a writer every aspect of the drama that a work of fiction must possess. As it happened, my wife’s friend was very sparing with details, and what really occurred to her son, came to me as no more than a frail outline, a few words and concepts at best. To become a novel, the characters, the setting, the cascade of details needed to create the drama—all of these things would have to be imagined afresh and rendered as real. I also knew that any editor’s interest in the manuscript that resulted would conjure further and further changes, resulting in a book that would bear perhaps a critical, but finally fleeting relationship to the original story.

This is in fact what happened. The eighty-page original draft more than doubled in size. Characters who were vague in the draft were allowed to speak and feel and blossom into real people. The setting, Cape Cod, a place I love and not at all the scene of the original abuse, became as much a living character as the humans. In growing the story, parts of the novel would, necessarily, not have anything to do with the boy and his abuse. As any writer knows, when a character is born, he or she comes with interests and tendencies that seem to be that character’s birthright, not the imposition of a heavy-handed authority. So, my main character Owen, the friend of the abused boy, was passionate about go-karts. The well-known track in Harwich, Mass., became the model for J&D Karts, Owen’s father’s track. Summer baseball also became an element in the story; Owen was not the poorest, but not the best player, either. Owen’s sister and grandmother, shadows in the original, now walk and talk and feel, weaving their life in and around Owen in ways that had little to nothing to do with my wife’s friend and her son.

The novel blossomed from the bare details of a horrific true story into a three-dimensional world. In that huge difference, however, one hopes there is real truth and power.

One agonizing aspect of the editorial and publishing progress of the manuscript was the difficulty and final impossibility—at least at this time—of crafting the narrative for the eight-year-olds who might really benefit from hearing it. The story became simply too hard and too graphic for that young of a reader. I would have had to simplify and couch the truth with vague statements about “bad touching,” and I was not prepared to dull the language or impact of the story in this and other ways. The characters in The Summer of Owen Todd are, therefore, eleven. The action takes place during the summer between fifth grade and middle school. A writer has to make sacrifices of this sort, strange as they are. I know I may continue to question this decision, but less and less as the book moves out into the public. I have a hope that the thoughts and ideas the novel may generate discussion and, in a way, trickle down through families—older readers to younger siblings, parents to children.

The advance copies are just going out in a planned way now. I talked about the book at the recent New Jersey NerdCamp. I signed advance copies at ALA this June. Several reviews on Goodreads, the only ones we have so far, have been generous in their understanding of both the difficulty of the topic and how it is told. I remain in suspension until the book finally appears in October, but I’m encouraged by its early readers, who have responded with sensitivity and thoughtfulness.

Tony Abbott has written many books for young readers aged 6 to 14, including the series The Secrets of Droon and The Copernicus Legacy, and the novels Firegirl, The Postcard, and Lunch-Box Dream. The Summer of Owen Todd will appear from Farrar Straus Giroux Books for Young Readers in October 2017. Tony has been on the faculty of Lesley University’s MFA in Creative Writing, and is a frequent conference speaker and visitor to schools. His website is www.tonyabbottbooks.com.