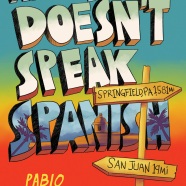 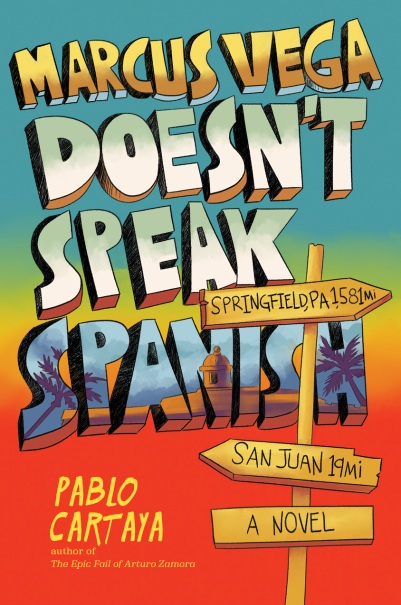 The song of the coquí, Puerto Rico’s enchanting little frog echoed in my head long after I left the island on my most recent visit. I was revising my next middle grade novel, Marcus Vega Doesn’t Speak Spanish (Viking, August 2018), which is about a fourteen-year-old boy named Marcus who travels to Puerto Rico to find his estranged father. On that journey, he connects with long-forgotten relatives and discovers a part of his identity and culture that he never knew. The book is meant to be a paean to the island. To connect readers with this special place that is actually part of the United States.

My wife and I were staying at a hotel just west of Fajardo near el Yunque, Puerto Rico’s illustrious rain forest. We visited friends in Cayey, the mountainous central region of the island. We went to Montaña Santa, El Charco Azul (a hidden enclave where locals gather to swim), and travelled to La Ruta del Lechón in Guavate, literally “Pork Highway”. This is where locals go on weekends. Along the mountainous road, there are restaurants playing reggaeton and roadside food spots called chinchorros roasting whole pigs. People on the street walk and eat, catch-up with each other, and occasionally break out into dance. Experiencing this, you would never imagine that there could be a debt crisis drowning the island or the myriad of other challenges facing the people of Puerto Rico. Because what I’ve learned about this place is that even in hardship, Puerto Ricans celebrate life. Pa’lante, as they say. Forward. Always forward.

On the road to Guavate we stopped at an art shop tucked into a mountainside. An older woman greeted us and introduced herself as the owner, proudly declaring that local artists in Guavate made the artwork in her shop. She told me her husband was Cuban. She said I reminded her of him. I told her I tell stories for a living. Then she gave me a little sculpture of a man sitting on a rock with a spear on his side and a book in his hands. She told me, “el escritor que leé, sabe fajar con palabras.” She wrapped it in newspaper, put it in a little grocery bag, and invited us to stay at her house the next time we were in PR. It was the perfect cap to a remarkable last trip and just what I needed to finish my final draft.

Three weeks later, two back-to-back hurricanes tore through the island, leaving millions without power or ways to communicate with loved ones who hoped for some news of their safety, myself included. As recently as December 18, the New York Times reported that the initial death toll of 68 is actually over a thousand (and counting). Much of the island is still without power—including schools whose children have been studying by sunlight. To say this is not a tragedy, to suggest that somehow Puerto Ricans are to blame for years of economic hardship, as the President of the United States expressed in a series of tweets on September 30, is to betray the Puerto Rican people.

Ever since the hurricane hit this fall, the story has taken on even more meaning for me. I think back to what the woman in Guavate told me when she gave me the little sculpture. She said, “The writer who reads can fight with words.” Marcus Vega Doesn’t Speak Spanish (shout-out to Jorge Lacera’s artwork and cover design) is about home, the many facets of fatherhood, and the spirit of the people of Puerto Rico. I hope the story brings all readers a little closer to Puerto Rico and motivates us to keep fighting for our neighbors there.

NOTE: For those of you interested, here are a few ways you can help the people in Puerto Rico still reeling from the devastation.

Pablo Cartaya is the author of The Epic Fail of Arturo Zamora (Viking, May 2017) and the upcoming Marcus Vega Doesn’t Speak Spanish (Viking, 2018). He is lead faculty at Sierra Nevada College’s MFA in Writing for Children & Young Adults.

Like Loading...
← A Short History of the Girl Next Door, by Jared Reck – Review by Aileen Hower It’s Not You, It’s Me: Talking about the Things We Don’t Talk About Mental Health in YA Fiction by Kim Briggs →