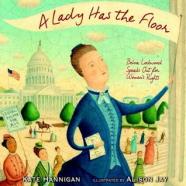 Visiting classrooms to talk about researching and writing books, I’m often asked where story ideas come from. I tell students that we can find story ideas everywhere—reading the news, eavesdropping on restaurant conversations, even observing our dogs. I especially love finding them in other books. Such is the case when I was researching a recent project about the barrier-smashing daredevil stunt-reporter Nellie Bly. Reading about her 1889 race around the world against Elizabeth Bisland, I came across a curious newspaper interview Nellie had done the year before.

The headline trumpeted WOMAN’S PART IN POLITICS and in it, Nellie interviewed a woman I’d never heard of before: Belva Lockwood. “The Feminine Candidate for the Presidency of This Great Country Thinks She Has a Fighting Chance,” blared the deck headline.

I was intrigued. Putting the story about the Nellie-Elizabeth race on hold, I chased after Belva instead. And immersing myself in research—from primary sources like online newspaper archives and Belva’s own writing to historical works about the early suffragettes—I couldn’t stop reading about this fascinating and inspiring pioneer for equality. A Lady Has the Floor: Belva Lockwood Speaks Out for Women’s Rights is the result. 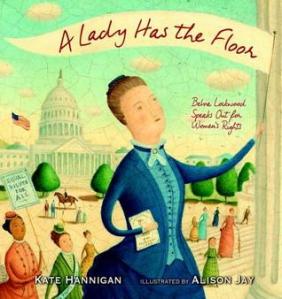 Leave a comment below for a chance to win a free copy of A Lady Has the Floor from publisher Boyds Mills Press.

“She is a womanly woman,” Nellie Bly wrote of Belva Lockwood in the August 12, 1888, interview that ran in Nellie’s newspaper, The New York World. In just one more year, Nellie would take off on her race against time—and Elizabeth—and The World’s circulation would skyrocket to feed readers’ insatiable interest in these globetrotting women. But about Belva, Nellie waxed, “What greater praise can one give her. She is firm and intelligent, without being manly; and gentle and womanly without being frivolous. She is the beau ideal of a woman with a brain.”

I’d always been under the impression that Victoria Woodhull was the first woman to throw her bonnet in the ring for the White House, in 1872. But the more I read about Belva Lockwood, the more I believed she was deserving of the title of First Woman Presidential Candidate. Digging through the history books and newspaper archives, I found that Belva’s campaign was serious if short. She only accepted her party’s nomination to run in September 1884 (oh, for the days of two-month presidential campaigns!). But Belva campaigned fiercely and her name appeared on ballots, while scholars dispute whether Victoria’s ever did. Belva received 4,000 votes.

“I cannot vote, but I can be voted for,” was Belva’s slogan, keenly highlighting the steep challenges women faced running for political office when their half of the population did not enjoy any rights at the ballot box.

Tracing backward through Belva’s life, I learned she had the chops for political office. One of the first women to earn a law degree, Belva set up her own office in Washington, D.C. There she opened her doors to “outsiders” like herself—widows and other women who found themselves frustrated or treated unfairly by the male-dominated system that denied them rights. Other clients included freed slaves, Native Americans, and Civil War veterans seeking pensions.

A lifelong progressive, Belva worked on the ground floor of her home while she and her family lived on the upper floors. Her daughter trained to become a lawyer like Mom, as did her niece. Her mother lived there too. And knowing how hard it was to find adequate childcare, Belva welcomed her granddaughter and other workers’ children to play in the offices as their mothers worked nearby.

The first woman admitted to the bar of the Supreme Court, and the first woman to argue a case before it, Belva endured humiliating treatment from judges, juries, and fellow attorneys. But she persisted, not allowing what she saw as petty small-mindedness to get in her way.

“What good do you expect to result from your campaign,” Nellie asked Belva in the 1888 article, which was timed to Belva’s second run for president.

“It educates the people to the idea,” Belva told her. “If we always talk and never work we will not accomplish anything. Men always say, ‘Let’s see what you can do.’ Now we are trying to show them.”

Non-fiction picture book biographies spotlight the upstanders, the barrier breakers, the people who dared. They make powerful tools for demonstrating how everyday people can possess qualities such as bravery, tenacity, and generosity. I wrote A Lady Has the Floor (publishing next week with Boyds Mills Press) to plant a little seed in young readers’ minds that maybe those qualities reside in each one of us, too. When I think of all the women stepping forward and lifting their voices in 2018, I believe Belva Lockwood—and Nellie Bly—would be proud.

Chicago author Kate Hannigan writes fiction and non-fiction for young readers, and she finally did finish writing that Nellie Bly-Elizabeth Bisland picture book. Her historical novel The Detective’s Assistant, based on America’s first woman detective, won the Golden Kite Award for best middle-grade. Kate is a proud recipient of a Nerdy Book Award. Visit her online at KateHannigan.com.

Like Loading...
← The Bookmark of a Reader by Kirsten LeClerc Top Ten (Well, Actually Eight) – In Honor of Frankenstein’s 200th Birthday by Rob Bittner →