Home » Retro Reviews » Retro review: ‘Holding up the Universe.’ Learning to love yourself by Vanessa Simpson 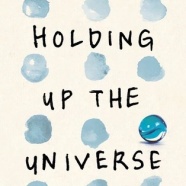 Retro review: ‘Holding up the Universe.’ Learning to love yourself by Vanessa Simpson

The release of Holding up the Universe by Jennifer Niven was highly anticipated to be a huge hit in April 2016, as the success of her previous Young Adult novel, All the Bright Places, had left her readers wondering how she could possibly pull at their emotions any more. As soon as I found out a little about the content for this book, I knew it was going to be another important one in terms of daily struggles that one might face, be that under the pressures of high school or beyond.

Holding Up the Universe brought a new set of emotions as we are introduced to Libby Stroud, who had once been named ‘America’s Fattest Teen’. YA literature is an incredibly important platform for these issues, as lack of body positivity is known to be a huge problem among teenagers in today’s society. Libby has lost her mother and had let her eating habits spiral out of control. The story follows her after she has already lost some of the weight, starting a new school and we begin to see Libby embrace her body and learn to love herself as she realises that she is a fantastic person, despite the size of her clothes.

The story is told from the perspectives of both Libby and Jack Masselin, a popular boy at school who is keeping the secret that he has the condition Prosopagnosia, meaning he can’t recognise faces. Ever. It’s a very interesting story with an unusual angle. Jack’s inability to recognise people gives us an insight into why he feels the need to keep up a facade at school, and as the story develops we start to see him figure out a lot about himself. He hasn’t told anyone about his condition, not his friends or family, which is an incredible burden when he wakes up in the morning and can’t even recognise his own brother. He is self diagnosed and feels the weight of the world on his shoulders as he has to try extra hard every day to get by in his own lonely world.

The unusual nature of Jack’s condition also helps him to see Libby for her true self, as well as his working to understand more about his own personality, as he battles with the conventions of the American high school in terms of befriending ‘the fat girl’. Libby, obviously, is struggling as she is the new girl at school and there is a lot of focus on her weight. We are also given the hardships of grief and loss, as Libby is still coming to terms with the death of her mother, another important topic that is touched upon in many YA novels. We begin to learn that Libby isn’t just about her size, not even close. She is kind and funny and bubbly, and also a keen and fantastic dancer, which is pretty topical at the moment because of the #donthatetheshake campaign, encouraging everyone to post a video of themselves dancing on social media to promote all body types.

Basically, this book could be extremely important to a lot of people who are struggling with the way they look. It is successful in promoting body positivity without trivialising the sad truth that so many people are striving for ‘the perfect body’ which simply doesn’t exist. It sends out a great message as far as a YA novel goes, you don’t have to look a certain way, and you should always be happy and comfortable in your own skin. The unlikely pairing of Libby and Jack gives the book a unique setting that you have probably never seen before, with hopeful intentions that you might be able to see past the way somebody looks.

Vanessa Simpson works for a children’s book concession store in the UK. She is able to keep up to date with the key trends and popular titles through her work. She studied Ancient History at University which fuelled her passion for literature and enjoys reading, writing and blogging in her spare time. Her blog can be found at www.champdoeslife.wordpress.com, where she is often writing about books, body positivity, and finding her favourite slice of cake.

Like Loading...
← Celebrating the ALA Youth Media Awards with my Students by Colby Sharp Incombustible Ideas: The Subtle Bigotry of Book Banning by Jennifer LaGarde and Travis Crowder →