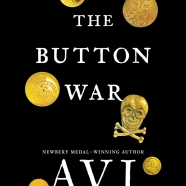 Avi: What Do Writers Write?

I made up my mind to become a writer when I was a senior in high school. I wrote that down in the only diary I have ever kept.

I began high school at Stuyvesant High School in New York City. It was a huge, high-powered school, with some five thousand boys (no girls). That first freshman semester I took five classes. One of them was French. I can recall Mademoiselle Popo (that really was her name) calling upon me for something. When I gave my answer, she said, “Vous êtes stupide!” Even I, with my poor French, knew what that meant: “You are stupid!”

Indeed, when my first report card came home, I had failed all my classes. Within days, my parents informed me that I would stop going to Stuyvesant High School and would start at Elisabeth Irwin High School, a private school. This school had about a hundred students and was focused on reading and writing. I was much happier there.

But at the end of my second year, Mr. Stillman, my English teacher, called my parents and said, “Avi is the worst student I have ever had.”

If I wished to return to Elisabeth Irwin, I would have to:

The first was relatively easy. The second was not—to put it mildly—something I wished to do. But I did want to go back to that school. Thus it was that I spent the summer of 1953, four mornings a week, working with Ella Ratner, a teacher friend of my parents’. Ironically, she was a French teacher.

Before I first met with her, Ms. Ratner asked to see my school writing. It was supplied. At our first session, I sat down at her kitchen table. I was nervous and unhappy. She began by saying something that changed my life and made me want to become a writer.

She said, “You know, I’ve read your writing. You are an interesting person. If you wrote better, people would know that.”

Keep in mind that I was sixteen years old and no one had ever said I was an “interesting person.” I surely did not think that of myself. (Vous êtes stupide.) The idea that I was interesting, and that other people (maybe my classmates?) would think me interesting if I wrote better, was like catnip. Did Ms. Ratner mean it, or was she just being clever? I have no idea. But I loved it. It meant I did not have to write for Mr. Stillman and his grade. I could write for others.

But if you want to be a professional writer, you have to write for many others. Moreover, you have to write for strangers, people who know nothing about you except what you have written. You have to write in such a way that other people understand your ideas, your images, your feelings, your thoughts. These readers have to find your writing interesting. This notion gave rise to my own credo: Writers do not write writing, they write reading. Which is to say, writing is all about reading. You write for others.

If writing is about reading, then reading is about writing. If you wish to compose music, you have to listen to music. If you wish to learn about running, you have to run yourself. And if you want to learn about writing, you have to read. Because it’s writing. The more you read, the better writer you become. If you are lucky, if you read a great deal, your mind begins to work like a writer. You begin to arrange the world—in your head—as if it were a piece of reading.

Not that writing is easy. I find it, in fact, very hard. Oh sure, sometimes (rarely) something spools out that is good. But 99 percent of the time I have to rewrite over and over again. I think I must rewrite my books as many as eighty times. Even then, my wife or friends make suggestions for more rewrites. My editors always do. It’s all about making the writing interesting for the reader.

What do writers write? They write reading.

Avi comes from a family of writers going back to the nineteenth century. He has just published his eightieth book, The Button War (Candlewick Press), and has won many awards for his work, including a Newbery Medal and two Newbery Honors. He and his wife live in a log house high in the Colorado Rocky Mountains, in the middle of a forest. Their five children are all grown up.

Like Loading...
← Kids Need Books Everywhere by Jennifer LaGarde and Donalyn Miller Crystal Chan Takes on Complex Issues for Teens in New YA ‘All That I Can Fix’ – Interview by Kate Hannigan →