When you asked me to contribute to We Rise, We Resist, We Raise Our Voices, I was honored and thrilled to participate. The overall goal of the anthology—to speak to these precarious times and aim these dialogues and artistic expressions and exchanges at young people—was, in my opinion, extremely important. I immediately thought of the current situation regarding migrants, particularly those of color from Central America and Mexico who leave their countries fearing persecution and are detained at the southern border. I thought of the fearful, harassing climate that many migrants in our country face, given this current administration’s hostility toward them, particularly with raids upon migrant communities while at home, work, school, and even at hospitals seeking medical attention or giving birth. I was haunted and incensed by these incidents and felt compelled to explore one of these stories in fiction. We Rise, We Resist, We Raise Our Voices was the perfect literary project and vehicle for the piece, so I wrote specially for it because it spoke directly to the mission of such a racist, anti-immigrant administration.

I was haunted by an incident that I saw. A thirteen-year-old girl witnessed her father being arrested by ICE police after taking her to school. As she watched from the back seat of her parents’ car, ICE police descended upon her father. The anguish and confusion of her screaming and crying was caught on video and circulated through media outlets and online. That incident and those images spoke to me deeply, and that’s what I had in mind when I wrote “One Day Papí Drove Me to School” for We Rise, We Resist, We Raise Our Voices. It was a harrowing incident so pressing that the story came out of me in an instant, as if a poem.

I was blown away by Edel’s powerful, compelling work. Initially, I was under the impression that the story was going to be published without art. So when I was sent the galleys, I was so elated, you would’ve thought it was Christmas morning! Edel’s use of red, white, and blue; his subtle rendering of the ICE logo on the jacket sleeves of the hulking figure arresting the narrator’s father; and the face of the nine-year-old spunky narrator shown in the texture of a flag—the entire piece, in fact, transformed into a United States flag—is so subversive and emotionally rendered. It is the perfect visual narrative to compliment the written narrative. I think it is sheer brilliance, and I am so honored to have my words treated in such a powerful way that now I can’t picture it without Edel’s work. Like listening to an Aretha Franklin or Chaka Kahn song by someone else—that would be sacrilegious!

To me, literature and art are all about empathy. I want them to see the human element in the all-too-real harassment, violence, and terror that are a result of racist and disruptive policies. I want teachers, librarians, students, and all readers to engage the three-dimensionality of characters seldom seen and encountered in American children’s and young adult literature. I want them to be able to use the story to have rich discussions about race, class, immigration, cultural differences, human similarities, and universality, as well as issues of policing, racism, solidarity, unity, and activism.

I think young people are incredibly sensitive to what they believe to be unfair and unjust. Children are usually sticklers for the truth, and they usually stand together and fight for and protect those who are bullied. I am reminded of the film version of the novel Wonder, where the main character is repeatedly bullied and made fun of at school, and the children who befriend him stand up for him against the bullies. That was such an emotional scene; it left a lump in my throat seeing how beautiful the youngsters were in defending their friend. It was at that moment that Auggie felt he had found his tribe, his community. That’s activism. Recently, as the immigration issue has heated up to a level where this administration has clumsily and brutally begun separating asylum-seeking migrant babies and children from their parents, children in Atlanta raised over $13,000 with sales from their lemonade stand! That’s serious old-school activism!

When the great African American poet Langston Hughes was a middle school student, he was singled out and discriminated against by a white teacher for being a Black child in the predominantly white Midwestern school. She harassed him and the other Black students by separating their seats from the white students. Along with fellow students (both Black and white) and their parents, they made placards and posters and successfully demonstrated against the Jim Crow laws and racist attitudes practiced at that school by that teacher. Today, the Parkland High School students and the young Black Lives Matter activists have shown us how powerful their voices are in inspiring movements using social media and the Internet to galvanize people to action. So my advice would be to look to the historical and recent examples; utilize your resources and connections; always be about unity and solidarity; and build coalitions like the children in “One Day Papí Drove Me to School.” Students can use their talents to make signs, T-shirts, social media posts, and blogs to bring attention to injustices and to bear witness and speak truth to power. Activism means to take a stand, speak up and speak out, and get active and involved. It takes intelligence, sensitivity, empathy, compassion, and passion. Young people have all the right tools. They always have! 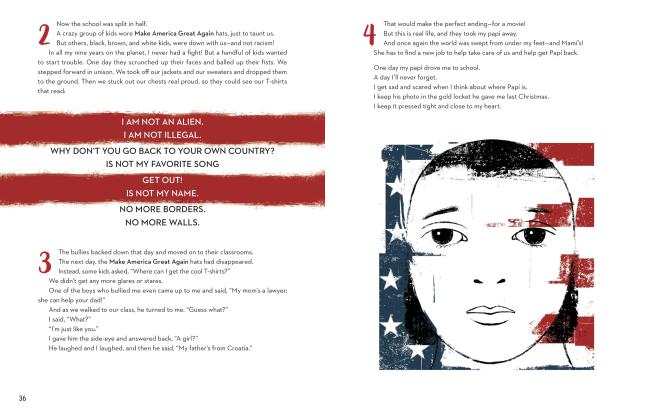 Like Loading...
← Top 10 Books that Should Have Won the Newbery (According to Me, Anyway) by Stacy Nockowitz Read It Again…and Again by Candice Watkins →