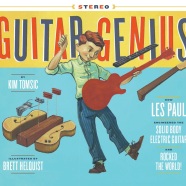 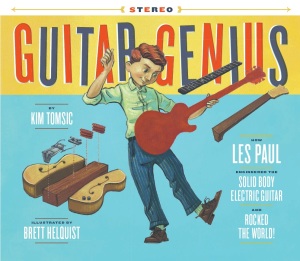 Though I love to brag about sitting first chair flute at Rancier Middle School from 6th-8th grade, I am sad to say I never learned to play the guitar. I am, however, the proud parent of a guitarist.

Here’s the thing about being the mother of a young guitarist—you must visit dozens of guitar stores with your son or daughter, otherwise your child won’t have the opportunity to play the store’s truly sweet instruments (and by “sweet” I mean expensive). I’ve logged hundreds of hours in stores like Wildwood Guitars, Corner Music, and Carter’s Vintage Guitars. One day, while I had my butt planted in one of the black leather chairs at Wildwood, I asked my son Cayman if I should write a picture book about Jimi Hendrix. He said, “That might be too dark for a picture book.” I said, “Okay, who’s this Les Paul guy?” My son about fell out of his chair. He told me Les Paul was the father of the solid body electric guitar, the man behind Sound on Sound music, the winner of seven Grammy Awards, and an inductee in many halls of fame. Then he loving called Les the OG, which roughly translates to say Les Paul represents both the origins of the artform and a powerfully lasting influence!

While Cayman spent the next few hours comparing humbucker pickups to P90s, I began my Guitar Genius research journey. I was enchanted to learn that as a child, little Lester didn’t want to miss anything. At night, he would tie a string to his big toe, then dangle the other end of the string out his upstairs bedroom window so that his friends could give him a tug if anything important came up. Sure enough, his friends often pulled that string, because Lester made everything more exciting.

I continued my research by reading dozens of newspaper and magazine articles, ordering books about Les Paul, and watching every documentary I could find about him. One piece of research always led to the next. I was on fire to dig deeper and learn more, so I took a chance and reached out to Sue Baker who was not only one of Les Paul’s closest friends during the last ten years of his life, but she’s also the program developer at the Les Paul Foundation.

In the first of what turned out to be dozens of emails and phone calls, Sue told me about how Les was a curious child. He was inventor who loved to tinker and take everything apart—things like his mother’s player piano, telephone, and phonograph. She told me how he saved his paper route money and ordered his first guitar from Sears, Roebuck & Co. She told me how Les tried and failed but never gave up, and that he had a mother who absolutely believed in him.

When Sue and I ended our first (two-hour-long!) call, I knew two things: (1) I’d found a new friend in Sue, and (2) Sue had provided me with the theme at the heart of Guitar Genius—perseverance. She told me when Les was a kid, his piano teacher sent him home with a note pinned to his shirt that said “Your boy, Lester, will never learn music, so save your money. Please don’t send him for any more lessons.”

Les persevered and later proved his teacher dead wrong. Most musicians old and young agree that music as we experience it today would not exist without Les Paul. The Rock & Roll Hall of Fame website says he’s responsible for “…developing revolutionary engineering techniques such as close-miking, echo delay, overdubbing, and multitracking.” Les Paul went on to have a blockbuster career in music and inventing. As for my own guitar genius—he’s currently studying commercial guitar in Nashville, Tennessee, and recently sold his R6 motorcycle to buy a Les Paul guitar of his own. I couldn’t be happier about this decision.

Kim Tomsic is a reader, writer, dreamer, believer, exclamation point abuser, lover of peanut M&Ms, devourer of ling-hi-muis, and fan of all things children’s literature and author of novel THE 11:11 WISH. She is active with the SCBWI and serves as Co-RA for the Rocky Mountain Chapter. Kim is also on the Board of Directors for the Friends of Haiti, a 501 (c) 3 charity organized to provide Haitian students the opportunity to go to school. Kim claims two super-powers: parallel parking and fierce loyalty. She has one husband, two children, and two dogs—all keep her laughing.