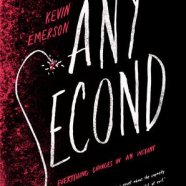 ANY SECOND: Anxiety, Isolation, and Empathy by Kevin Emerson

One time, during high school biology class, I peeled all the skin off the top third of my index finger. I know, gross, right? It was a symptom of anxiety, though I didn’t know it at the time. These days, my fingers look okay, but it’s not uncommon to see me sporting a Star Wars Band-Aid or two on my thumbs.

When I’m in a highly anxious state—most often while reading social media, or stuck in writer’s block, but it can also happen in traffic, or the moments right before a social event—that’s when my fingers get bloody. One thing all these situations have in common: I’m almost always alone.

In my new YA novel ANY SECOND, Maya is anxiously picking her fingers to gory results when her life nearly ends in an attempted suicide bombing at a Seattle mall. It’s Maya who stops the would-be bomber—Eli, also a teen and the story’s other narrator. They end up with their hands on the detonator for hours.

Flash forward to a year later: even though the bomb didn’t go off that afternoon, it’s been going off in Maya’s head ever since, her anxiety combining with PTSD. Her skin picking has graduated to hair pulling; she’s been in a string of increasingly unhealthy relationships; her grades are tanking; her participation in the world is waning, and her phone is always there to remind her how much happier and healthier everyone else is.

Eli is on his own slow, perilous journey back into the world after being abducted and indoctrinated by a man named Gabriel, who is still at large. He’s returned to school, but even the most basic facets of teen life seem alien to him.

Most days, it feels easier to withdraw. To stay isolated. And yet Maya and Eli soon realize that the only person they feel a true connection to is each other.

One problem: no one wants them to interact. Not their families and therapists, who worry that they’ll regress, nor the law enforcement officers watching them both, who are wary not only of Gabriel’s return as the mall anniversary looms, but of a series of online videos that threaten a copycat attack.

But Maya and Eli persevere, and once they find each other, they begin to discover the strength to reengage with life in ways they haven’t been able to for a long time.

I began writing ANY SECOND because of my own anxious reaction to the violence around us. I wanted to find a message of hope and empathy for readers and for myself. One thing became clear as the story unspooled: every character’s situation got worse when they became isolated. Every character improved when they forged connections.

One of the lies that anxiety tells is that you’re better off alone. That engaging with the world will make things worse. Sometimes it’s definitely the right move to take some time for yourself. But moments of withdrawal can also be when anxiety really sinks its claws in.

Because another way anxiety likes to lie is by spinning stories to support your fears. These stories are often incomplete, and yet, if left to fester in isolation, they can harden into solid walls that seem like fact. It’s only by engaging with the world that we can find the whole truth. Sometimes our worries turn out to be true, but more often we learn that there’s more to the story, and that actually, our challenges are more similar than we thought: that we are all in this together.

When Maya and Eli are finally allowed to hang out like somewhat normal teens, getting burgers, coffee, going to a show, they also begin a little ritual of making lists in Maya’s journal of details from the world around them: squirrel with a French fry, cloud shaped like a hippo, ticking of a car engine…. Something about this simple practice not only connects them to the moment and each other, but also makes them feel like they are part of something larger. Outside of their stormy heads, they feel a greater connection to everything and everyone.

(It might not be a surprise that during these moments, their phones are stuffed away.)

At one point, Eli reveals to Maya that almost every day since that afternoon at the mall, he has thought of the three words she said to him while they were hanging on for dear life: I got you. Maya doesn’t remember saying it, doesn’t even think it sounds like her. But she did. In that moment, with their lives literally in each other’s hands: three simple words, stronger than fear.

There are so many forces pushing us apart, isolating us, including many of the very ones that claim to make us more social. It takes courage to choose connection, to reject isolation, to reach out instead of retreating. Sometimes it can seem too risky, even impossible. But when we do, we open ourselves to the possibility of forging bonds of empathy, luminous connections that beat back the darkness.

Kevin Emerson is the author of middle grade and YA novels including LAST DAY ON MARS (the first in the Chronicle of the Dark Star series), and the forthcoming ANY SECOND. His previous titles include the Oliver Nocturne series, the Atlanteans series, and the Exile series. Kevin is a former K-8 science teacher and creative writing teacher. He sings and plays drums in various Seattle bands. He has won a spelling bee, lost a beauty pageant, and once appeared in a Swedish TV commercial.

Like Loading...
← A Long Way to Go on Gun Violence by Laura Shovan The Write Stuff: How to Turn Kids Who Aren’t Readers Into Writers by Katherine Marsh →