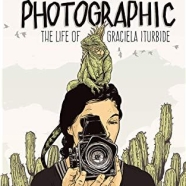 Break out your credit cards, fire up your library’s website to reserve some books, it’s time to share some more of the 2018 Nerdy Award winning titles with you. This list is one a group of my students will cheer for like no other. See, it doesn’t matter that I have over two hundred graphic novels in my seventh grade classroom, I’m constantly told by my graphic-novel-loving students that I need more. And while we already own the majority this year’s award winners, even I have already purchased a few more from this list . So join with me in giving these creators a standing ovation for creating stories my students devour, close the cover, and then immediately open up to read them again.

The 2018 Nerdies for Graphic Novels go to…

“Speak up for yourself-we want to know what you have to say.”

From the first moment of her freshman year at Merryweather High, Melinda knows this is a big fat lie, part of the nonsense of high school. She is friendless–an outcast–because she busted an end-of-summer party by calling the cops, so now nobody will talk to her, let alone listen to her. Through her work on an art project, she is finally able to face what really happened that night: She was raped by an upperclassman, a guy who still attends Merryweather and is still a threat to her. 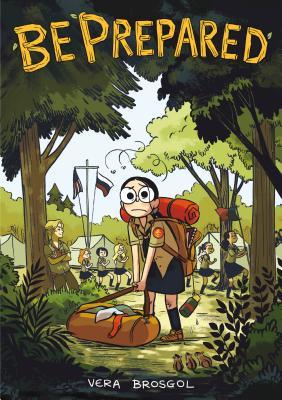 Written and Illustrated by Vera Brosgol

All Vera wants to do is fit in—but that’s not easy for a Russian girl in the suburbs. Her friends live in fancy houses and their parents can afford to send them to the best summer camps. Vera’s single mother can’t afford that sort of luxury, but there’s one summer camp in her price range—Russian summer camp.

Vera is sure she’s found the one place she can fit in, but camp is far from what she imagined. And nothing could prepare her for all the “cool girl” drama, endless Russian history lessons, and outhouses straight out of nightmares! 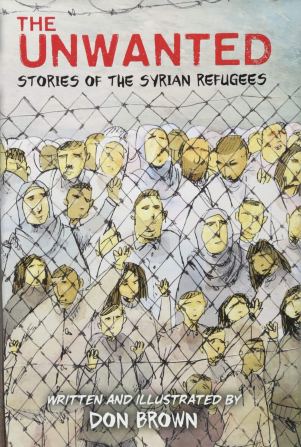 The Unwanted: Stories of the Syrian Refugees

Written and illustrated by Don Brown

Starting in 2011, refugees flood out of war-torn Syria in Exodus-like proportions. The surprising flood of victims overwhelms neighboring countries, and chaos follows. Resentment in host nations heightens as disruption and the cost of aid grows. By 2017, many want to turn their backs on the victims. The refugees are the unwanted.

Don Brown depicts moments of both heartbreaking horror and hope in the ongoing Syrian refugee crisis. Shining a light on the stories of the survivors, The Unwanted is a testament to the courage and resilience of the refugees and a call to action for all those who read.

Lowriders Blast from the Past

Written by Cathy Camper, illustrated by Raul the Third

When new friends Lupe, Flapjack, and Elirio are each bullied by Las Matamoscas, they know they’re going to like one another. When they find out they all love lowrider cars, they know they’ll be friends for life. But the bullies won’t leave the Lowriders alone—and they don’t let any girls or babies into car clubs. Can these three determined outcasts prove they deserve to be in the car show? Humor, Spanish words, and lowrider culture come together in this heartwarming graphic novel of three friends navigating the bumpy terrain of friendship, bullying, and standing up for what you believe in. ¡Vámonos! 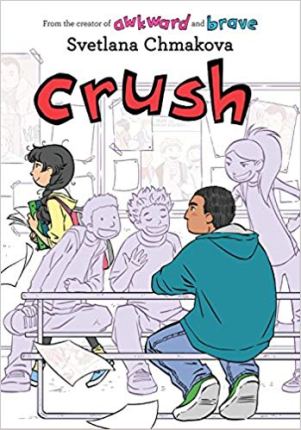 Written and illustrated by Svetlana Chmakova

Jorge seems to have it all together. He’s big enough that nobody really messes with him, but he’s also a genuinely sweet guy with a solid, reliable group of friends. The only time he ever really feels off his game is when he crosses paths with a certain girl… But when the group dynamic among the boys starts to shift, will Jorge be able to balance what his friends expect of him versus what he actually wants? 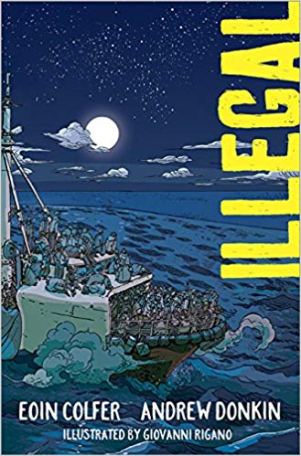 His sister left months ago. Now his brother has disappeared too, and Ebo knows it can only be to make the hazardous journey to Europe.

Ebo’s epic journey takes him across the Sahara Desert to the dangerous streets of Tripoli, and finally out to the merciless sea. But with every step he holds on to his hope for a new life, and a reunion with his sister. 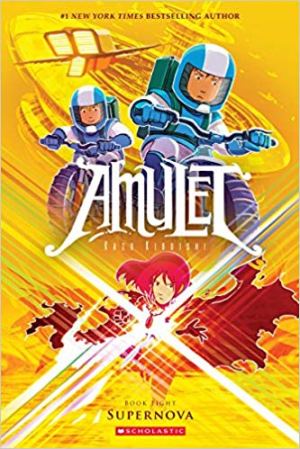 Written and illustrated by Kazu Kibuishi

Emily has lost control of her Amulet and is imprisoned in the Void, where she must find a way to escape the influence of the Voice. Meanwhile, Emily’s brother, Navin, travels to Lighthouse One, a space station where the Resistance is preparing to battle the approaching Shadow forces that would drain planet Alledia of all its resources. Emily and Navin must be smarter and stronger than ever to ensure Alledia’s survival. 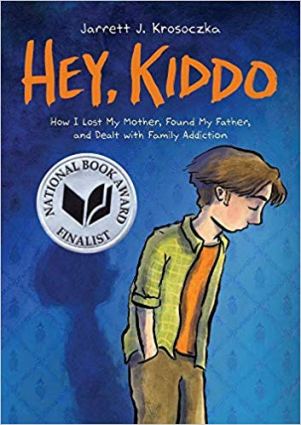 Hey, Kiddo is the graphic memoir of author-illustrator Jarrett J. Krosoczka. Raised by his colorful grandparents, who adopted him because his mother was an incarcerated heroin addict, Krosoczka didn’t know his father’s name until he saw his birth certificate when registering for a school ski trip. Hey, Kiddo traces Krosoczka’s search for his father, his difficult interactions with his mother, his day-to-day life with his grandparents, and his path to becoming an artist. 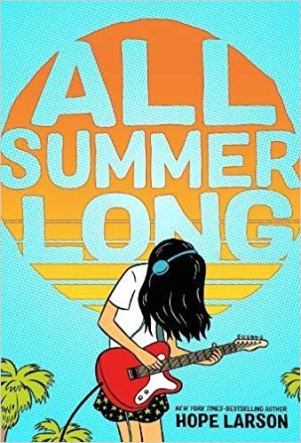 Written and illustrated by Hope Larson

Thirteen-year-old Bina has a long summer ahead of her. She and her best friend, Austin, usually do everything together, but he’s off to soccer camp for a month, and he’s been acting kind of weird lately anyway. So it’s up to Bina to see how much fun she can have on her own. At first it’s a lot of guitar playing, boredom, and bad TV, but things look up when she finds an unlikely companion in Austin’s older sister, who enjoys music just as much as Bina. But then Austin comes home from camp, and he’s acting even weirder than when he left. How Bina and Austin rise above their growing pains and reestablish their friendship and respect for their differences makes for a touching and funny coming-of-age story.

Written and illustrated by Terri Libenson

Middle school is all about labels.

Izzy is the dreamer. There’s nothing Izzy loves more than acting in skits and making up funny stories. The downside? She can never quite focus enough to get her schoolwork done.

Bri is the brain. But she wants people to see there’s more to her than just a report card full of As. At the same time, she wishes her mom would accept her the way she is and stop bugging her to “break out of her shell” and join drama club.

The girls’ lives converge in unexpected ways on the day of a school talent show, which turns out to be even more dramatic than either Bri or Izzy could have imagined. 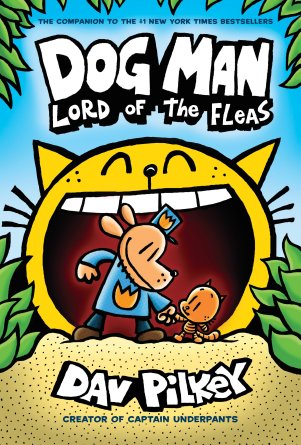 Dog Man: Lord of the Fleas

Written and illustrated by Dav Pilkey

When a new bunch of baddies bust up the town, Dog Man is called into action — and this time he isn’t alone. With a cute kitten and a remarkable robot by his side, our heroes must save the day by joining forces with an unlikely ally: Petey, the World’s Most Evil Cat. But can the villainous Petey avoid vengeance and venture into virtue?

Photographic: The Life of Graciela Iturbide

Graciela Iturbide was born in México City in 1942, the oldest of 13 children. When tragedy struck Iturbide as a young mother, she turned to photography for solace and understanding. From then on Iturbide embarked on a photographic journey that has taken her throughout her native México, from the Sonora Desert to Juchitán to Frida Kahlo’s bathroom, to the United States, India, and beyond. Photographic is a symbolic, poetic, and deeply personal graphic biography of this iconic photographer. 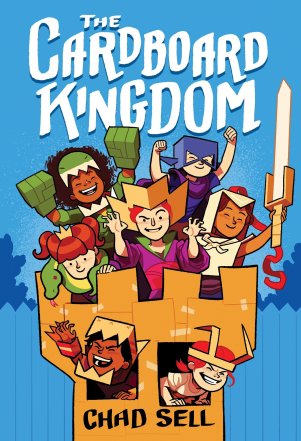 Welcome to a neighborhood of kids who transform ordinary boxes into colorful costumes, and their ordinary block into cardboard kingdom. This is the summer when sixteen kids encounter knights and rogues, robots and monsters–and their own inner demons–on one last quest before school starts again.

In the Cardboard Kingdom, you can be anything you want to be–imagine that!

Written and illustrated by Ngozi Ukazu

Y’all… I might not be ready for this. I may be a former junior figure skating champion, vlogger extraordinaire, and very talented amateur pâtissier, but being a freshman on the Samwell University hockey team is a whole new challenge. It’s nothing like co-ed club hockey back in Georgia! First of all? There’s checking. And then, there is Jack—our very attractive but moody captain.

The Prince and the Dressmaker

Written and illustrated by Jen Wang

Paris, at the dawn of the modern age:

Prince Sebastian is looking for a bride―or rather, his parents are looking for one for him. Sebastian is too busy hiding his secret life from everyone. At night he puts on daring dresses and takes Paris by storm as the fabulous Lady Crystallia―the hottest fashion icon in the world capital of fashion!

Sebastian’s secret weapon (and best friend) is the brilliant dressmaker Frances―one of only two people who know the truth: sometimes this boy wears dresses. But Frances dreams of greatness, and being someone’s secret weapon means being a secret. Forever. How long can Frances defer her dreams to protect a friend?

Congratulations to all of the 2018 Nerdy Book Club award winners for best graphic novels.

Katherine Sokolowski has taught for twenty-two years and currently teaches seventh grade in Monticello, Illinois. She is passionate about reading both in her classroom and also with her two sons. You can find her online at http://readwriteandreflect.blogspot.com/ and on Twitter as @katsok.