Home » Author Posts » SO NOT MARY POPPINS! by Margo Sorenson

SO NOT MARY POPPINS! by Margo Sorenson

The world of children is abuzz! Disney says its new Mary Poppins movie released in December will be truer to the books than the original movie in 1964, starring Dick Van Dyke and Julie Andrews.

Ah! Truer to the books—what a wonderful concept! Reading the Mary Poppins series aloud to children who have seen only that 1963 first movie and have never read the books is illuminating, as I discovered this last summer, when I read aloud two of the Mary Poppins books, MARY POPPINS IN THE PARK and MARY POPPINS, to my grandchildren, ages five and nine, the ages I was when I first read the books. Yes, they could have read the books on their own, but, as we know, reading aloud to young readers is a true delight, because it encourages questioning, dialogue, meaningful conversations, and unique insights. When I started out to read these favorite books from my childhood, however, I had no idea what we would discover together.

Reading the very first chapter of MARY POPPINS IN THE PARK (the second in the series, but, because I read that book first, as a kid, we read it first, too) was the occasion for real “head-snaps”! In Chapter One, “Every Goose a Swan,” Mary Poppins’s true character is fully revealed, as here, when young Michael is stumbling to explain himself, trying to get out of the tight spot he’s put himself into with Mary Poppins:

“I don’t mean somebody, Mary Poppins! I mean not somebody else! You’re Mary Poppins through and through! Inside and outside. And round about. All of you is Mary Poppins. That is how I like you!
“Humph!” she said, disbelievingly. But the fierceness faded away from her face.

With a laugh of relief, he sprang towards her, embracing her wet blue skirt.

“Don’t grab me like that, Michael Banks. I am not a Dutch Doll, thank you!
“You are!” he shouted. “No, you’re not! You only look like one. Oh, Mary Poppins, tell me truly! You aren’t anybody in disguise? I want you just as you are!”

A faint, pleased smile puckered her mouth. Her head gave a prideful toss.

“Me? Disguised? Certainly not!”

With a loud sniff at the mere idea, she disengaged his hands.

“But, Mary Poppins—” Jane persisted. “Supposing you weren’t Mary Poppins, who would you choose to be?”

The blue eyes under the tulip hat turned to her in surprise.

There was only one answer to such a question. 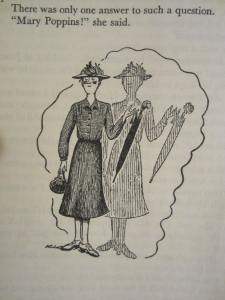 After their initial gasps, my grandchildren doubled up in laughter, delighted at the self-assuredness of the not-so-sweet nanny, who was always quite right. After a few more chapters of magical adventures, the five-year-old asked, “But why is Mary Poppins so mean, not like in the movie?” “What do you mean, ‘mean’?” I asked, and we were off and running with a lively discussion about magic, unpredictability, and boundaries.

“Oh, I see,” they exclaimed, knowingly, after exploring what would happen in real life if unscripted, magical adventures were allowed to run rampant and unsupervised. They enjoyed coming to conclusions themselves, as all young readers enjoy doing, and their discoveries gave them new insights.

Reading that book and then the next book aloud (MARY POPPINS, actually, the first in the series) brought even more dialogue and laughter. They thoroughly enjoyed already knowing what would happen in the second book, as we were reading the first. They exclaimed excitedly about clues they found and made connections, and many “Aha!” moments ensued, filled with amazement and hilarity. Always, the refrain echoed, “That’s so different from the movie!” Making the comparisons was a joy-filled journey for all three of us, resulting in whimsical comments about their own experiences and affirming the need for imaginative adventures. Of course, many of Mary Poppins’s sayings have become staples of our interactions:

“This is not a Bear Garden!”

“Spit-spot and off to bed!”

“I never explain anything.”

In her article about the forthcoming movie in The Guardian, November 23, 2018, “Mary Poppins: Why We Need a Spoonful of Sugar More than Ever,” Emma Brockes writes: “What is it she teaches the children? Empathy; mindfulness; a sneaky determination to win (at the horse race). Tidiness. Not to gush. Not to worry, overly, about whether or not they are liked. Simultaneously to believe and not believe what they see. As in the books, she denies to the children that anything magical has happened, inculcating skepticism and something worthwhile about view point.”

When Disney released the news about the remake, the grandchildren were overjoyed, because they had come to love and admire the real Mary Poppins and the Banks family of the actual books, not the sweet, old movie version. The books were more real to them than the movie—as they should be! I asked our granddaughter what she was looking forward to about seeing the new movie, and she said, “Because it’s supposed to be more like the real Mary Poppins—what we read in the books!” 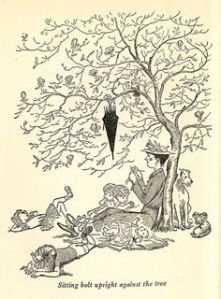 Consider reading aloud to young readers a book that has been made into a movie, and you may find the comparisons and conversations engaging and challenging. There are many from which to choose, such as JAMES AND THE GIANT PEACH, MATILDA, and THE BRIDGE TO TERABITHIA. As readers, writers, and teachers of children’s literature, by reading aloud to children and engaging in dialogue with them, we can enlarge both our and their horizons. What a way to pay it forward!

Margo Sorenson is the author of thirty books for young readers. Her most recent young adult novel is SECRETS IN TRANSLATION (Fitzroy Books, 2018), set in Italy, in which 17-year-old “nanny” Alessandra is most definitely not Mary Poppins! You can find her online at www.margosorenson.com.

Like Loading...
← Ten Ways Reading New and Diverse Literature Changes Us as Teachers By Stephanie Affinito and Kris McGee My Mirror is Cracked by Jodi-Beth Moreno →